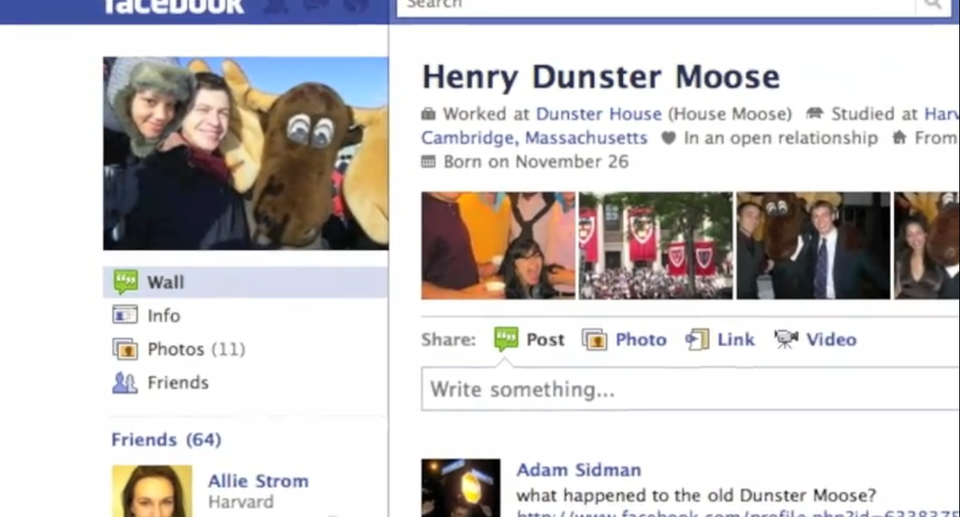 By Courtesy of Dunster House Committee

Although freshmen will not learn their housing assignments until March 10, Dunster and Quincy have already created teasers based on two of this past year's most popular movies, "The Social Network" and "Inception."

With all the hype in Hollywood and at Harvard surrounding "The Social Network," it's no surprise that Dunster used it as inspiration for their video, mirroring the original trailer. Instead of featuring generic Facebook pages and Jesse Eisenberg, Dunster's version stars the Facebook profile of the House's moose mascot. According to the trailer, "you don’t get to 500 million real friends unless you're in Dunster," making Dunster not only a fun place to be, but also the third most populous country in the world.

Quincy went with a surreal approach to housing day with a video called "Quinception." Featuring dramatic background music and a remake of the rotating hallway scene from "Inception," the video is mysterious, telling viewers that "your house is the scene of the party." But what about a party within a party? With all the confusion and drama that surrounds housing day in the first place, let's hope students' experiences don't mimic the plot of "Inception."

Will other houses go with movie-themed videos or try a different take? With housing day approaching quickly, the answer will probably be revealed soon.

Tags
FilmDunsterQuincyHarvard on the Web