All-Nighters Found to Cause Euphoria ... and Brain Damage 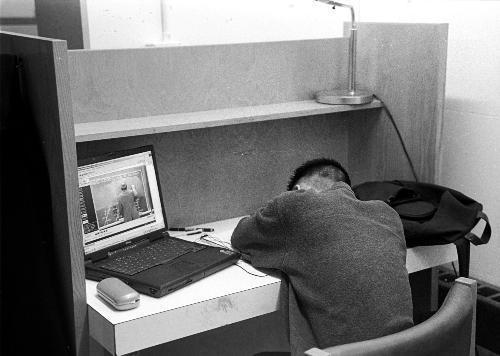 Pulling an all-nighter can not only help you study for a test, but can also create euphoric feelings the next day. So says a study produced by a team of researchers including Harvard Medical School Associate Professor Seung-Schik Yoo.

Of course, it's not all good news if you are used to staying up all night. Other studies by Yoo's group, led by UC Berkeley Associate Professor Matthew P. Walker, have found that lack of sleep can also cause extreme negative emotions and other problems.

The most recent study by Yoo's group involved depriving one group of subjects of sleep for 36 hours and then showing them visual stimuli. The results were surprising. "For those people who didn't get enough sleep, they evaluated the [neutral images] more positively," Yoo said. In short, normal events created exaggerated emotional reactions in sleep-deprived subjects.

To be clear, the study does not recommend skipping sleep as a responsible course of action. Not only are the euphoric reactions short-lived, but the researchers say that sleeplessness has several other negative consequences.

For instance, lack of sleep harms your memories of events. "We know that episodic memory has been altered, and [sleep-deprived subjects] cannot remember as much as people who sleep normally," Yoo said.

More ominously, college students may be at risk for long-term brain damage if they consistently skimp on sleep. Yoo noted the brain's neural plasticity—its ability to adapt to new situations. If the brain is consistently deprived of slumber for an extended period of time, Yoo said, it may adapt to that state and be permanently altered.

"In a chronic state of sleep deprivation, like a student who cannot get enough sleep—it's definitely going to alter the brain in the long term," Yoo said.

In the end, despite the possibility of positive emotions, the takeaway for college students is mostly a downer: that all-nighter might cause euphoria (and a completed problem set), but enough of them could theoretically result in brain damage. Scary stuff.