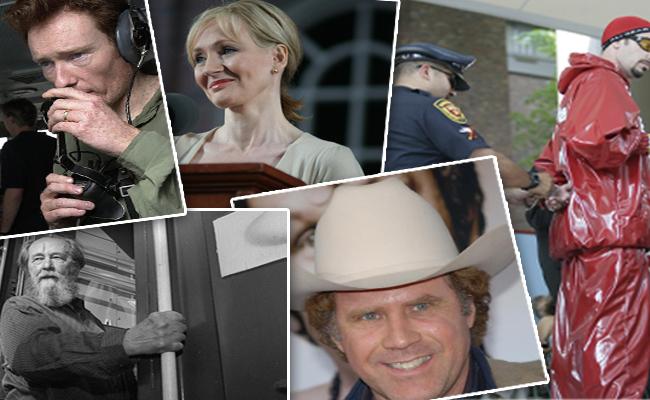 Over the course of the next few weeks, seniors will have to sit through a number of speeches—some good, some bad. In the spirit of the season, we decided to profile some of Harvard's most notable Commencement and Class Day speeches.

Ferrell started off with a confession: "As most of you are aware I didn't graduate from Harvard. In fact, I never even got a call back from admissions. Damn you Harvard! Damn you!" He knocked former President George W. Bush, whom he famously impersonated on Saturday Night Live, "some of you might have seen him as a father figure. A dimwitted father figure perhaps" and communicated this message to the Class of 2003 on behalf of Bush, "the great thing about being the Class of 2002 is that you can always remember when you graduated. Because 2002 is a palindrome." Ferrell told the graduating class of their future: "You are about to enter a world where you aren't allowed to use your cell phones on airplanes, during live theatre, at the movies, at funerals, or even during your own elective surgery. Apparently the Berlin wall just went up because we now live in Russia," clearly an allusion to Solzhenitsyn's 1978 address.

Emerson challenged Harvard's finest minds to create something on their own, instead of swallowing and regurgitating other people's views, saying, "Meek young men grow up in libraries, believing it their duty to accept the views, which Cicero, which Locke, which Bacon, have given, forgetful that Cicero, Locke, and Bacon were only young men in libraries, when they wrote these books."

Solzhenitsyn addressed the Soviet-American divide head-on, saying that he would try to bring some "veritas," to the situation. That truth came in the form of "No, I could not recommend your society in its present state as an ideal for the transformation of ours. Through intense suffering our country has now achieved a spiritual development of such intensity that the Western system in its present state of spiritual exhaustion does not look attractive. Even those characteristics of your life which I have just mentioned are extremely saddening."

Sasha Baron Cohen as "Ali G" said things never before heard in Tercentenary Theatre, such as, "all of you is probably feminists, or as we call them in England, lezzes" and "Me naturally assumed this included essentials like breakfast and special interest pay-per-view movies. Imagine my surprise when this morning I was given a bill for 154 dollars. Me was actually trying to save Harvard money by buying the 24 hour slutfest package."

People allegedly began lining up at 5 a.m. to hear the Harry Potter author's speech about dealing with failure. Rowling said, "You might never fail on the scale I did, but some failure in life is inevitable. It is impossible to live without failing at something, unless you live so cautiously that you might as well not have lived at all—in which case, you fail by default."