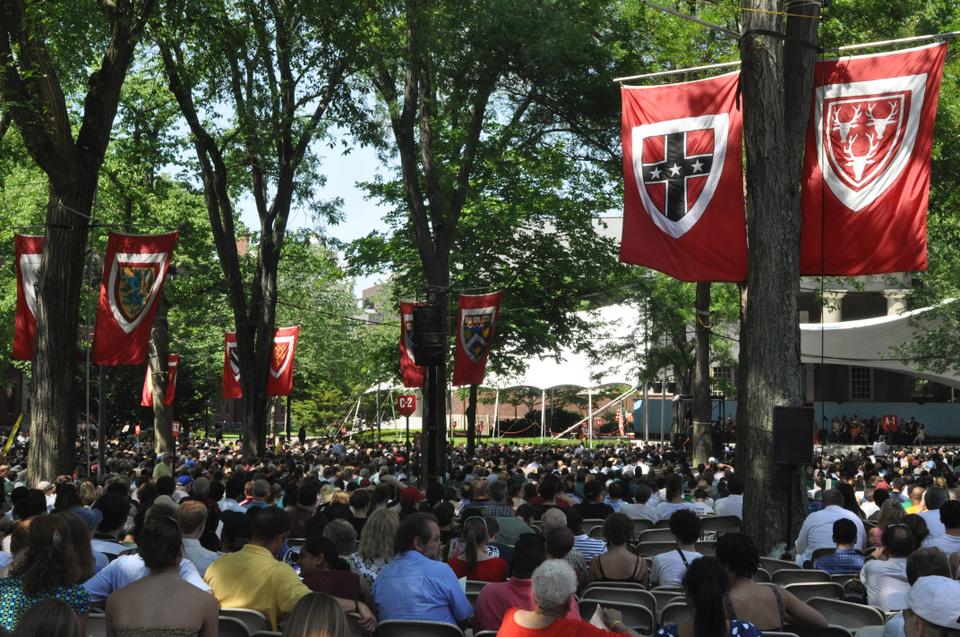 Friends, family members, and students of the Class of 2010 gather in Harvard Yard for the 2010 Class Day Exercises yesterday afternoon.

Harvard University—center of truth, knowledge, and communism? It seems Bloomberg News has finally caught on to the trend. A Nov. 9 article entitled "Harvard-Trained Communists Vie for Power as Party Gathers" describes a series of executive training programs at Harvard's Kennedy School in which many of the world's leading communists have participated.

While Bloomberg focused on Kennedy School graduates such as Li Yuanchao, Chen Deming,and Bo Guagua (all of whom are associated with the communist party elite) we at Flyby are surprised they didn't pick up on some other more obvious communist tendencies right at the university's center. Herewith, a closer look at what might have given Harvard away as a breeding ground for communism.First culprit: HUDS food. When students enroll at Harvard, they are forced into uniform eating plans. No opting out. No opting up. No choice. Nothing. Breakfast, lunch, dinner, and brain break. Only two types of soup and about a dozen options on the made-to-order grill. Could there be a more obvious tip-off?

If meal plans weren't an egregious enough breach in the democratic philosophy to make Harvard's real, albeit covert, mission clear, Bloomberg could have turned to UHS, another no opt-out feature of the Harvard experience. Requiring all students to join a plan that gives them access to world class medical experts and specialists on a 24-7 basis? No freedom there! Just another example of Harvard's real agenda.

But when all is said and done, the dorms and Houses have the greatest potential to do us in. Everyone living on campus? Forcing thousands of eighteen to twenty-two year olds to live with gobs of their friends and peers in stately, historic, red brick buildings within blocks of each other? Please. What sort of an institution is this? Where is the choice? Where is the democracy? How could Harvard expect not to be discovered, providing students with only bare essentials in their dismally similar dormitories: running water, iron bedsteads, wood floors, decorative fire places, and the occasional common space outfitted with sofas, paintings, chandeliers, and a grand piano? It's all just too obvious.

Fortunately for our university's public image, Bloomberg News has yet to follow the trail of Annenberg bread crumbs, HUHS prescriptions, and manufactured housing day cheer to the truth of Harvard's collectivist intentions. For now, at least, the real "Veritas" of Harvard's plans for world domination remains silent.