I Believe In Sherlock Holmes 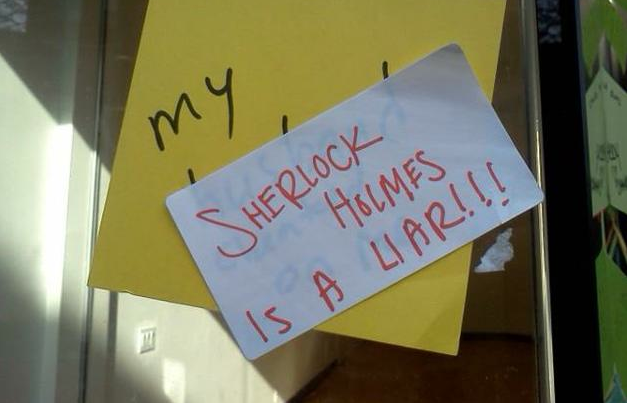 Whether it's the demonic hound haunting Baskerville manor, or the Swamp Adder lurking in the Stoner household, stories involving detective Sherlock Holmes rarely fail to capture the imagination of their audiences—especially when they leap off the pages and on to Harvard's campus.

Over the past two weeks, residents of the Quad have noticed a change in their familiar landscape: around five chalk graffiti messages, reading "I believe in Sherlock Holmes," and "Moriarty was real," have popped up on buildings and fences. One of the most prominent notes appears on an outside wall of Pforzheimer House, next to the shuttle stop.

Fans of the BBC hit "Sherlock" will recognize that the text is inspired by the climactic finale to the show's second season.

The two Harvard students responsible for the graffiti have chosen to remain anonymous to protect their relationships with administrators and refer to themselves simply as "The Goth Detectives"—an ode to English comedians Russell Brand and Noel Fielding, they explained. The duo said they were astonished at just how many people have noticed their work and understood its reference.

They were also pleased to see such a positive response from the Harvard student body, and reported having seen other spin-off chalk messages around campus. The pieces have shown resilience against nature's elements and campus authorities; so far only one of the pieces has been removed.

The motivation behind their work was a response to two things they felt Harvard is lacking: "Harvard needs more radical chalk graffiti," said one member of the pair. "And more shenanigans," added the second.

Sherlock provided a way to achieve both.

The Sherlock Holmes phenomenon, however, extends far beyond the gates of Harvard's campus; similar "I believe in Sherlock Holmes" tags have been popping up all over the country.

This blog documents the tags as they appear and this map gives an idea of just how widespread the phenomenon is.