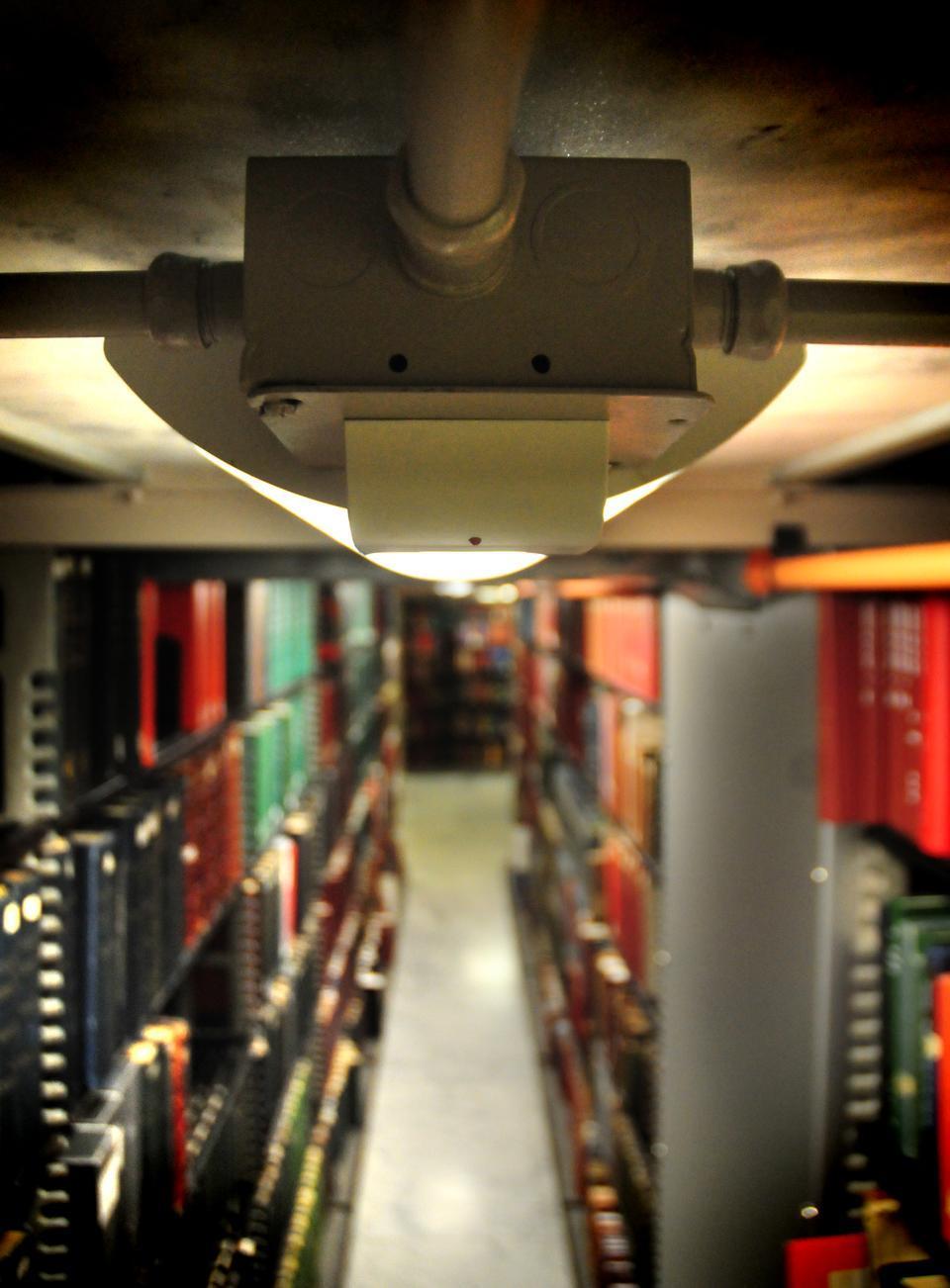 Motion sensors, similar to this one installed in A level of Widener Library, have been credited with conserving thousands in both watts and dollars.

Just north of Harvard Yard, the immense stone building holds many valuable items, including over 70,000 legal images and over 300,000 rare books and early-illuminated manuscripts. Karen S. Beck, the curator of the Historical and Special Collections and Rare Books, leads a team of six librarians in managing these artifacts, books and paintings. Beck took The Crimson behind the scenes to glimpse these cool—and sometimes wacky—materials.

While the Supreme Court often faces the obstacle of issuing decisions without an army to enforce them, the Justices themselves are no strangers to waging war. Associate Justice Oliver Wendell Holmes Jr. '61, a former professor at Harvard Law School, fought in the Civil War. In addition to storing the flag he was supposed to have used, Langdell Hall also hosts the sword he brandished. So next time the student in the carrel next to you is drumming his pencil, you don't just have to resort to dirty looks thrown in between the book shelves—the special collections are here to help.

The Highest Lunchbox in the Land

Although the Harvard Law School library has a tremendous collection of scholarly legal materials, its halls are not above housing the most modest of items: a lunch box. The small tin box was used by Holmes each day as he sat on the highest bench in America, helping to feed one of the greatest legal minds of American history.

Ever think that the Supreme Court Justices don't even know themselves what they think? Are they confused between yes or no? Is it possible to simultaneously shake and nod your head? Well, you have more evidence than you think if you peruse the collection at Langdell, where you will find a "pretty good collection of Supreme Court Bobblehead dolls" that will go on exhibit later this year, according to Beck.

Before the days of the internet or even the printing press, citizens of England were notified of their legal rights four times a year when a representative would read aloud the Magna Carta in the town square. Harvard Law School library showcases a Magna Carta from 1327 that was thusly used. And it’s just one of 23 manuscript Magna Cartas in the Law School's collection. For Beck, it's difficult to choose one that stands out among the rest: "It's like trying to pick a favorite child."

In addition to the manuscripts, books, swords and lunch boxes strewn throughout the library, Langdell also houses a collection of paintings, including one of Isaac Royal and his family. Royal gave a big fat donation to the Law School, but the real reason why we keep his painting around is because it’s the first example of group portraiture in colonial America. Good thing it’s a "first" because competition for space is tough—according to Beck, there isn’t enough room for any more portraits.

The Casebook That Began At All

For every Law student staying up late reading for criminal procedure and every undergrad cramming for their Con Law paper, the search for blame is over. Point your fingers at the casebook of Christopher Columbus Langdell, who created the case method of pedagogy in law schools. He ruined your weekend plans back in 1871.