Princeton Mom Is Back with More Romantic Advice 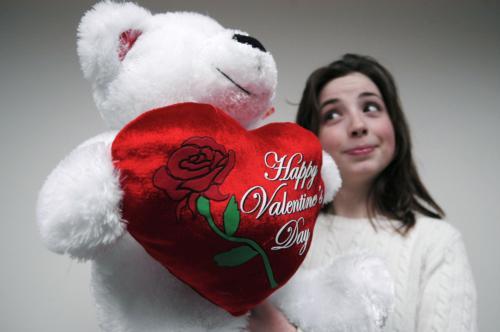 Emma loves a Valentine with a furry chest.

By Kara A. Culligan

I was sitting at one of those coveted nook-desks in Lamont Library, merrily typing away at summer internship applications and finishing up some reading before lecture, when suddenly I felt a large, gaping hole emerging in my heart. And then I read Susan Patton’s Valentine’s Day editorial in The Wall Street Journal, and everything became clear to me.Ms. Patton is the author of "Marry Smart: Advice for Finding the ‘One’" and the mother of a son at Princeton University. Last spring, she wrote a letter to the editor of The Daily Princetonian claiming that young women had better make use of the nation’s top schools’ most important resources: eligible sperm-carriers.

In case we saucy co-eds had forgotten her wise words because we were too busy burning our bras or something, Ms. Patton issued a short reminder the day before Valentine’s Day in The Wall Street Journal that we had better spend the weekend hunting down and ensnaring innocent males, else we’ll be stuck alone forever, or worse with some guy from a state school. And, according to Ms. Patton, "when the conversation turns to Jean Cocteau or Henrik Ibsen, the Bayeux Tapestry or Noam Chomsky, you won't find that glazed look that comes over his face at all appealing." Totally.

"What are you waiting for?" Ms. Patton asks in her latest article. "You're not getting any younger, but the competition for the men you'd be interested in marrying most definitely is." And then I realized: I was living an empty and unsatisfying life because I spent too much time on trivial pursuits like completing a degree in English and finding a career when actually, I should be husband-hunting. I mean, I’m eighteen. I'm practically an old maid by 16th-century standards.

Message received, I quickly closed my internship apps and scanned the library for potential suitors. I glanced up lustily from my psychology textbook at random passers-by. And then I tried demurely fluttering my handkerchief, because anything racier than that clearly isn't going to land me a man. I mean, as Ms. Patton told me, "he won’t buy the cow if the milk is free." After a long and grueling five minutes of this routine, I felt exhausted.

You see, I think Ms. Patton is right, but she doesn’t go far enough. By the time we women arrive at college, all of the attractive men are either decidedly uninterested, taken, or are our philosophy professors.  Clearly we need to start the husband-hunting process even earlier, so we can trap them before they obtain an understanding of their preferences, younger girlfriends, or tenure.

I would like to propose that Harvard outsource its application process to Match.com. Girls, no need to bother with those pesky SAT scores and personal essays, because as Ms. Patton reminds us, men are more often interested in "less-challenging women" anyway. Instead, simply submit a picture of yourself and a list of your biggest turn-ons and turn-offs. The admissions office will do the rest, and come pre-frosh weekend, you’ll already have a pre-husband. Crisis averted.

But writing this article has already taken up too much time for someone with a "biological clock ticking loud enough to ward off any potential suitors," so I better leave it to some smart man to figure things out for me.

Now back to the hunt.