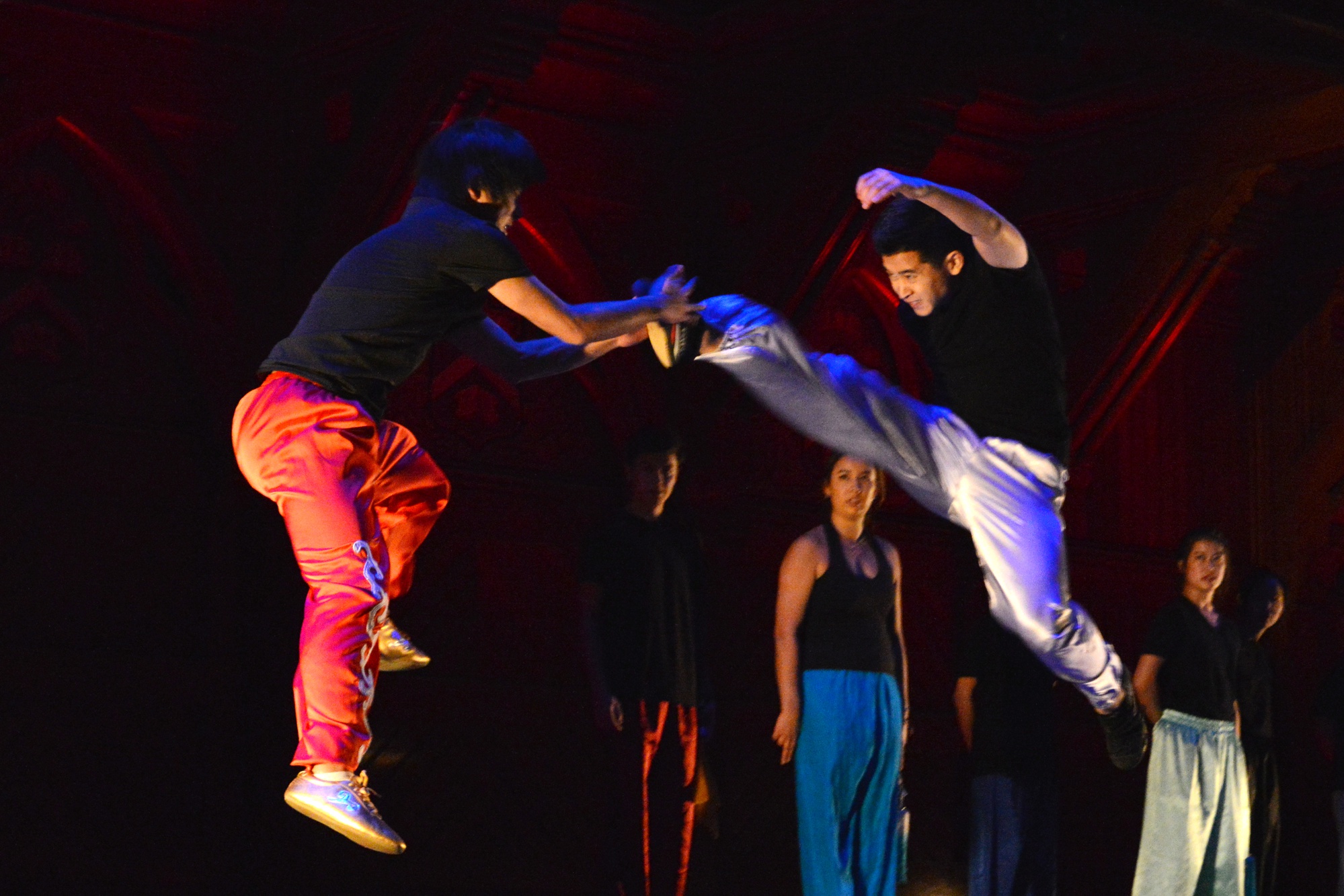 LL Cool J and student organizations representing different ethnicities came together onstage Saturday at the Harvard Foundation’s annual Cultural Rhythms festival, which celebrates Harvard’s diversity through student performances. The Crimson sent a roving reporter to interview audience members and performers about their experience at the festival.

RR: What was it like being able to perform onstage?

NA: It was so exhilarating to perform, especially knowing LL was right there onstage with us.

RR: Did you feel any pressure knowing he was there?

NA: I was terribly nervous and a little bit starstruck, but the energy of the audience really kept us going.

RR: Why did you choose this particular dance to perform?

NA: We performed a Bharatanatyam dance, which is an Indian classical dance…known for really rhythmic, intense beats, and we just thought that it’d be a perfect fit for Cultural Rhythms.

RR: How much time did you have to put into preparing for [Cultural Rhythms]?

NA: Our group practices really consistently, but our costumes are really intricate…. It took us two to three hours to get fully ready.

RR: How would you usually put it on?

NA: Usually we do our hair and makeup first. We put flowers, jewels in our hair. The costume itself has many pieces.

RR: What do you think of the show so far?

EL: I think LL Cool J did a good job…of highlighting how diverse the community is here in terms of Harvard.

RR: What has been your favorite performance?

EL: Well, my bias is to the Asian American Dance Troupe because I’m an alum. It’s always very great to see an organization grow. I was co-captain almost 10 years ago now. Oh my God. We were so much smaller. To see like 30 people onstage, the technical skill, the fact that there were boys on stage, it’s just really incredible. But I will have to say the mariachi was probably my favorite. Watching these organizations grow year after year has been really enriching.

RR: What are you going to perform in Cultural Rhythms?

AC: We’re going to perform a traditional Filipino dance. It’s called the Tinikling, where we use bamboo sticks and people dance through them.

RR: What is the hardest part of dancing the Tinikling?

AC: Probably the choreography and having 16 people do the sticks and dance together—[coordinating] at the same time to make it look nice.

VR: My students [in the Harvard College Hellenic Society] are participating in this show for their fourth consecutive year, but I’ve never had a chance to come and see them.

RR: What has been your favorite performance?

VR: So far, I was amazed by all of them. I think the Indian performance was so well done, and I like the fact that it was not only traditional but it was, as they said, choreography that they made themselves. The Asian performance was amazing, how martial arts was brought together with Chinese and ballet—all the traditional performances.

RR: What do you think about LL Cool J being the Artist of the Year?

VR: You know, I have no clue. I have to say, I had no idea who he was…. I think he’s a great choice. He handles everything very well, he has a genuine sense of humor, and I love him.

RR: Do you think this event embodies Harvard?

VR: At least, it is a good beginning. I wish it would have more groups. I don’t know how the process goes, but from what I’ve heard from my students is that they work throughout the year for this performance…. You can see the results.

RR: So you’re part of the Wushu Club. Why did you join?

JC: I think Wushu is great for everything. It trains your mental discipline as well as your body. You have to be constantly aware because if you [aren’t], you’re going to hurt yourself.

RR: How much work did you put into preparing for [your] performance?

JC: We trained every day the last week. The biggest problem was getting people together, but once everybody was there, it’s like the best.

RR: What about LL Cool J? What are your thoughts on him?

JC: Oh, I think he’s awesome…. For the most part I wasn’t able to watch it, but the part I did watch…he seemed like a really cool guy.