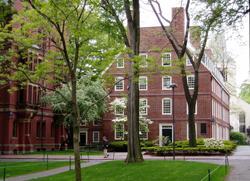 Seems legit to us. By FlyByBlog

We may be over halfway through the school year, but you’ve probably still not met one of those mythical Mass. Hall unicorns yet. Proving they really do exist, a current Mass. Hall resident and one of Flyby’s very own Tasnim Ahmed ’17 is here to dispel some myths and reveal some secrets about what life is like when you get to brush your teeth just feet away from the one and only Drew Gilpin Faust.As a freshman living in Mass. Hall, I get many different reactions from people once I tell them where I live. There’s certainly a lot of intrigue surrounding the oldest dorm at Harvard that houses 13 freshmen and Drew Faust’s office, but I’ve kept quiet about the secrets of Harvard's smallest home…until now.

Are you the chosen ones?
Absolutely…at least, that’s what we tell ourselves. There’s a reason our dormitory housed five founding fathers, including former president John Adams. We are the “Golden Children.”

Why were you chosen?
Unfortunately, this is classified information that cannot be disclosed because it poses a threat to national security.

Mass. Hallers Are Rarely Seen
There is common saying that seeing a Mass. Hall student outside his or her dorm is like seeing a unicorn skip in front of the John Harvard statue. Contrary to popular belief, the rarity of Mass. Hall sightings is not because we are overly studious introverts. Each of our rooms is actually equipped with a secret emergency exit that leads to hidden underground tunnels. Keys to these exits are given only to Mass. Hall residents. The underground tunnels lead to a room that allows us to monitor all student activity in Harvard Yard (think tracking device from The Dark Knight). Thus, you don’t see us, but we see you…

Ghosts
In a building that’s nearly three centuries old, there’s bound to be a few spirits floating around. In fact, we really enjoy the company. Sometimes a dorm with only twelve other kids gets lonely.

Dormcest Cannot Happen
...but not just because of how immensely awkward it would be. We really cannot partake in dormcest because we have been trained not to grow emotionally attached to anybody or anything. We are simply incapable of love.

Tourists
We really love the sound of tour guides at 8 a.m. shouting incorrect facts about Mass Hall. We also love walking outside in our old sweats in front of 20 strangers staring us down even more.

Mass. Hall Students Don’t Throw Parties
It’s really too inconvenient to throw parties in our single hallway. But, why would we throw parties when our homegirl Faust throws the best ragers anyway? They don’t call her president for no reason!

We Have Friends
Despite how close knit our Mass. Hall family is, we do have some social skills that allow us have friends that live outside Mass. Hall. I think.