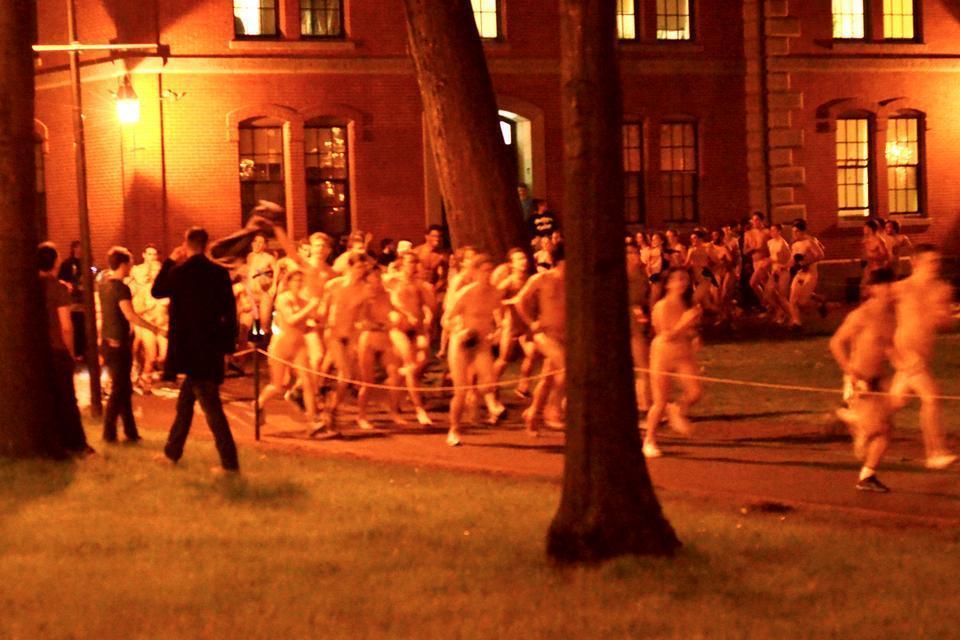 Students run in Primal Scream, a tradition in which participants undress and run around Harvard Yard on the last day of reading period. Fewer students ran in this Friday morning's Scream than in the winter of 2012. By John Y. C. Wang

The end of the semester is rapidly approaching, and that means several things. Time to solidify your date to Fête, time to actually start freaking out about what you’re doing this summer (and—for those who have that one all figured out—where you’re living), it’s time to answer the question weighing on everyone’s minds: “primal scream or nah.” Engaging in the time-honored Harvard ritual in the spring has its benefits, and here are several reasons why spring primal scream is totally better than winter primal scream.

It’s not in the winter—the primal scream Wikipedia article notes that primal scream is “done…even during New England winters.” This is Wikipedia-worthy because New England winters are remarkably cold. The degree of this is literally worth remarking upon. Running around the Yard naked in the spring is guaranteed to be a much more enjoyable experience, and for dudes in particular spring primal scream can be seen as a growing experience. Although it does take away that clutch cold weather scapegoat.

It’s in the spring—spring primal scream is not only not in the winter, but it also happens to be in the spring. This means that if you get tired while taking your lap, you can sit in those colorful chairs they scatter throughout the Yard in the springtime. Furthermore, more tourists come to Harvard in the spring, so you will be able to proudly strut your stuff in front of a wider audience. And while one might be tempted to associate spring with allergies, winter takes the cake when it comes to sneezing, given the fact that people often associate “winter” with “cold.”

Fewer people—for some reason, spring primal scream is way less crowded than winter primal scream. This has its obvious advantages. People you know probably won’t be doing it, so you don’t have to fear a friend—or worse, a crush—seeing you in your birthday suit. It also means you have less competition, which is particularly a boon if you suffer from low self-esteem.

Different crowd—winter primal scream is sometimes referred to as “freshman primal scream,” as it is often characterized by first-years trying to knock out one of the Big Three. People who do it in the spring are normally either really dedicated screamers (as in, they do it every semester) or senior springers taking advantage of their last chance to do run around Harvard Yard naked on the day before finals week. Plus you will only be able to know which primal scream is better after participating in both.

New perspective—it’s May. You’ve been doing school for the last nine months. You hate everyone. You just want everyone to go away. Well, unfortunately you still have to wait a couple more weeks before all the friends you’re so sick of disappear from your life. But, at least running in the spring primal scream gives you the chance to see people from a new perspective. It is certainly one way to spice up what has become your rote, repetitive, and mundane Harvard existence.