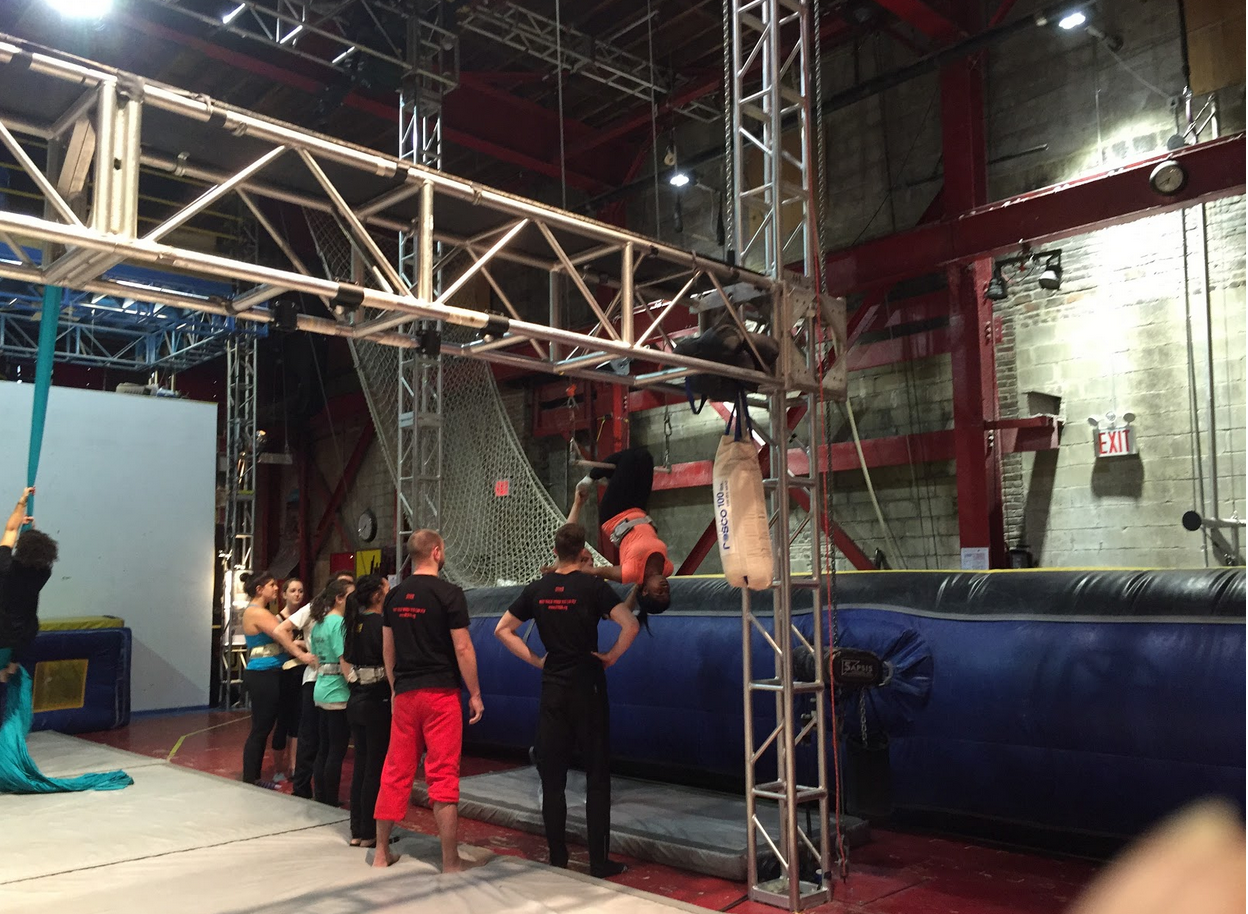 Our staff writer Kamara takes on new heights #noregrets By Kamara A. Swaby

Instead of doing the ever popular plans of going to a foreign country or going on a wonderful service trip, I decided to just head home to Brooklyn for Spring Break. See some friends, get some rest, forget about the work that was waiting for me back in Cambridge. But I also wanted to make my break meaningful and have an experience I could look back on and be proud of participating in. Yep, that’s why I decided to take a beginner’s trapeze class.

It’s weird that I decided to do this because I have a fear of heights. Prior to my trapeze class, I was not fond of the idea of plummeting down from high places. That’s why I hated escalators, roller coasters, or anywhere really that I could see how far up I was from the ground. That’s probably why I wanted to do something like a flying trapeze to break that old fear of mine.

The closest (and cheapest) trapeze class I could find was from STREB Lab for Action Mechanics. I took an hour-long trip to Williamsburg to reach to the studio for the 6:30 p.m. class. After signing in at the front and changing, I went to embark on my destiny.

There were three instructors waiting for the class to begin. Luckily, almost everyone in our group was trying this out for the first time as well. We were introduced to each other (no, not Harvard introductions) and told the basic tenets of how it would go down for the next two hours. If all went well, we would able to practice getting caught by someone at the end of the session.

First, we were strapped with harness belts like ones for rock climbing, so we could be hooked up to ropes for our safety. We did a practice run on a stationary bar that was closer to the ground. The basic procedure was that first we grab the bar, lock in your knees in order to hang it over the bar, and then free your hands so you’re basically hanging by your legs in the air. We all had a good time practicing this part.

Then it was time to go on the actual thing. Right before it was my time to go, I asked for advice from a girl who had done this class before. She thought for a moment and then just told me to “hold on.” My confidence level wasn’t exactly at the highest at that moment. Looking back, the worst part was probably climbing the ladder to the platform. It was skinny, long, and it shook just enough to make you feel like you would fall (even while hooked in). The time before the jump makes you think about the important things: the psets you forgot to do, the plans you need to make for the summer, and family and friends too. But there comes a time where you just have make that little bunny hop...and I did.

Even with the expectations given to us by our instructors, nothing beats the actual thing. I felt this great rush of wind as I was hanging on to this heavy bar for my dear life. But at the same time, I had to remember the directions given to us. Trying to hang my legs over a bar in mid-swing wasn’t so easy. But somehow, I was able to complete the commands my instructor had given to me, especially dropping from the bar to land on the ground which was covered (thankfully) by a huge balloon cushion.

I went on the swing again for four more times. One time, I fell flat on my face after failing to get my legs in the proper position. Though I never got to the catching part, I did have fun until the class was over. It was so weird, I’m still confused as to why I wanted to do this so badly. Maybe I wanted something exciting to put on my resume (proficient in Spanish, can use Microsoft Word, can literally flip in the air for you). I do know one thing for sure– that I had never been this sore before. I worked out muscles I never thought I had. But the time I had in the air was exhilarating. It's been one of the best Spring Break experiences I've ever had. I just wish I had a GoPro to show it happening as I saw it.