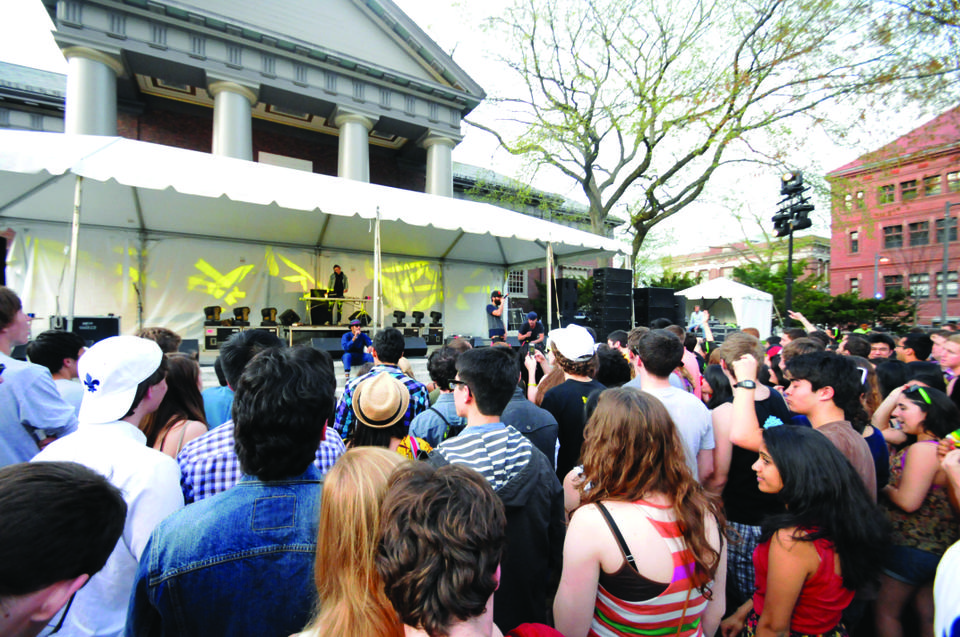 Yardfest attendees tune in to Das Racist, the three-man band that performed alongside the Cataracts at Harvard’s annual musical concert held last April in Tercentenary Theater.

In what seems like is becoming an annual tradition, five of Harvard College’s top student bands will perform tonight in the Battle for Yardfest for the chance to open up for this year’s Yardfest headliner, Grammy-nominee Jessie J. Out of the five who will perform from 7 to 10 p.m. in the Cambridge Queen’s Head Pub, only two will be selected.

Victory depends on who can turn out the largest number of students and earn the highest number of votes at the end of the evening. Student-artists will be featuring music style ranging from 90s rock to “nature rap.” The bands that will play tomorrow night include Black Tie Affair, who will open the show at seven, and Bared Grillz, the Intrinsics, the Solars, and Xkaban Jones and Dorian Grusoe.

Ben Blumstein ’15, the vocalist behind Bared Grillz, said that students should expect a sound unlike any they have ever heard before. He said that Bared Grillz produces rap about the wilderness, communing with mother nature, and breaking out of all the trappings of society.

“The crowd should expect massive jungle rhythms, a lot of sweat, a lot of energy, and I’d say a coming together in a moment of a return to a primordial state of nature,” Blumstein added. “We are the only people in the world making this kind of music and I think this is the future...we are trying to bring it to Yardfest, it’s the perfect venue out in nature, the way it was meant to be.”

He said that he plans to treat tomorrow night at the Queen’s head like it is Madison Square Garden, or the TD Garden arena in Boston.

“We know what the crowd wants, they desire an incredible show and we feel confident that we can deliver that,” Mouli said, adding that the chance to open up for Yardfest is the “coolest opportunity you could possibly have here at Harvard.”

Mouli added that Black Tie Affair already has performed one show at Queen’s Head earlier this year, with a large crowd, and that it almost “feels like a home turf.”

But at the end of the night, whose home turf will it be? Do it for these awesome bands. Do it in memory of Hot Breakfast. Whatever the reason, come out tomorrow night to hear the some of Harvard’s best student musicians.