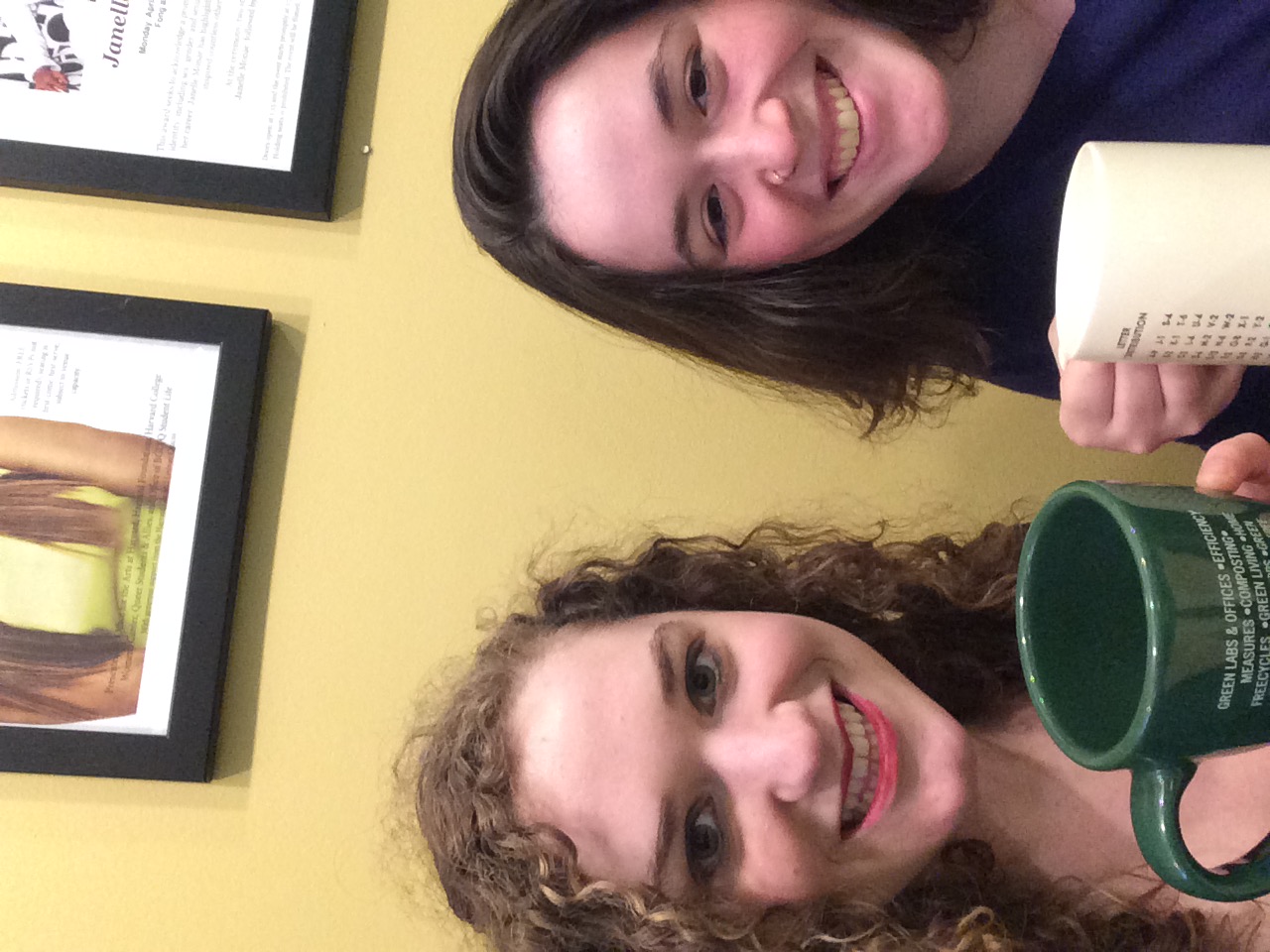 Lily (left) and Sofia (right) posing with some mugs!

Lily (left) and Sofia (right) posing with some mugs! By Courtesy of Lily M. Velona and Sofia A. Escudero

Lily M. Velona is a freshman planning on concentrating in Government with a secondary in Classics. Sofia A. Escudero is a junior studying WGS with a secondary in English. Sofia likes House of Cards and Lily enjoys The West Wing. Neither would be caught dead ordering a pumpkin spice latte. We sent them to Darwin’s (Sofia’s fave study spot) last Monday evening.

Lily: I went to the Mt. Auburn Darwin’s. I was sitting there looking around for people of all genders and ages, like didn’t really know what was going on.

Sofia: It occurred to me that we should clarify which Darwin’s, but I totally forgot to follow up. So I went to the one that I would go to. I realized basically at 6 o’clock, when we were supposed to meet, that we had never decided. So, that’s why I texted [the Flyby Matchmaker].

Lily: Then I got a text from [the Flyby Matchmaker] saying that my date was at the other Darwin’s so I volunteered to walk over… She was sitting at the front… We both expected to see a guy because we saw The Crimson had already done something on two girls going on a date. So we were both pleasantly surprised not to see a guy.

Sofia: She just looked like someone chill…was kind of surprised she was a freshman… but that was fine.

Lily: I personally didn’t care [that she was an upperclassmen]… differences in age are interesting, not prohibitive in forming a relationship.

Sofia: They had these muffin donut things… it was great.

Lily: I was actually really hungry… I got a full on Darwin’s sandwich.

Sofia: We started out with the standard where do you live, what are you studying blah blah blah… And we talked a little bit about activism stuff… She told me about work that she’d done with… Small Claims [Advisory Service]…so that was kind of cool.

Lily: We did the classic Harvard intros. We got to know each other...We actually talked about Green Day for a little bit. I was thoroughly obsessed with Green Day in eighth grade and she’s from the Bay Area so she has a lot of pride and so like meeting someone who had genuine pride for something I was obsessed with…that was meaningful to me as a former Green Day cult member.

Sofia: The only curveball was that… pretty early on [she] was like, ‘Hey I feel like I should say this, but I’m actually in a relationship... so I’m not trying to date.’

Lily: I actually filled out the survey with the person I’m dating…We wanted to see if we’d get each other. But we didn’t get each other… I didn’t tell [the person I’m dating that I’d gotten matched at first] because we decided not to tell each other so it would actually be a blind date. But then I got my match and it was [for] 6 p.m. on [a] Monday and I know they have a meeting every Monday at 6… So I was like ‘Kay I’m going on a date with someone else tomorrow. Don’t worry [it’s the Flyby date].’

Sofia: It was fine… There wasn’t a whole lot of chemistry I don’t think. I don’t think she’d get mad at me for saying that.

Lily: Having this not be a date where I’m looking to impress someone romantically was a catalyst in me getting the sandwich that I wanted to get.

Sofia: I definitely did spill tea on myself several times.

Lily: I really appreciated meeting Sofia. She was really awesome. We had done a lot of similar things but done them in different ways, which was cool. I did more activism through student groups and she’s a part of the Co-op… there’s inherent [activism] in the ideology of the Co-op.

Sofia: She asked a lot about living in the Co-op which is something that takes up a lot of my life in the best way and found out we had some mutual friends.

Lily: We talked about the other [Flyby matchmaker] articles. We were comparing and contrasting our experiences. We thought it was funny how in the first one…that guy who [smelled] really bad sat next to the date.

Sofia: We also were trying to figure out what would make [the Flyby Matchmaker] match us up.

Lily: We have the same general political interests…we both wrote down… ‘all genders’ as opposed to just 'I’m OK with a guy or girl'… probably our gender inclusivity brought us together… which is interesting because neither of us ended up getting someone who was non-binary.

Well, they’ll never know. The Matchmaker’s process is a complex one.

So what does the future hold?

They became Facebook friends (The Matchmaker will know it’s time to call it quits when the couple doesn’t even do that). Lily said, “I would be down to say hi. I don’t think it’s at all inconceivable that I would see her at stuff.” Sofia said, “I’ll probably see her at the Co-op…I’ll say hello…Who knows, maybe we’ll end up in class together.”

It became apparent that they had forgotten to take a selfie, so the picture above is photographic evidence of the fact that they did in fact meet up again. #success?

If you’re single (or apparently even if you’re not and just want to go on a friend-date), not an active Crimson member, and are interested in meeting someone new on campus, fill out this form! We’ll save your responses for next year. You can daydream about your magical date all summer. Talk about anticipation.