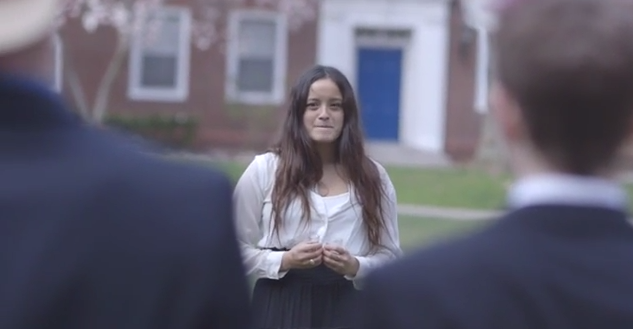 The bachelorette and her suitors. By Courtesy of YouTube

A group of students have produced an undergraduate dating show dubbed “The Crimson Bachelorette,” a seemingly satirical Harvard version of the ABC program. The first episode debuted on YouTube this month.

We’ll give you a quick rundown. Chase Sui Wonders ’18 is the bachelorette, and the show follows the rising sophomore and her 10 potential suitors in their supposed quest to find true love at Harvard. The show describes the contestants with terms as lovely as “milk taster” and “reptile in human skin,” while Wonders herself is labeled as someone who “tells people she votes independent,” a “sudoku prodigy” and “Hasty Pudding Woman of the Year.” (Watch out, Amy Poehler.)

In the show’s first episode, now available online, Wonders and the 10 contestants first attend a cocktail party, where the contestants try their best to impress her.

Their attempts are admirable: Contestant Gilbert J. Wassermann ’18 serenades Wonders on the mandolin, while contestant Spenser Goodman ’15 shows off his extra-short Chubbies shorts. (Wonders’s take: “He talks about shorts a little more frequently than I’d like him to.”)

Afterwards, contestants gather for a meeting of “The Elder Council,” when they vote one contestant off of the show. Producers then come in and seemingly arbitrarily kick off another contestant (spoiler: The show might be rigged).

Wonders then shares a shot of 2 percent milk with the four final contestants.

We at Flyby would give this show a 10/10 for production value and cinematography, 9/10 for captions and one-liners, and 0/10 for inclusivity of the lactose intolerant. And it deserves a nod for its accurate portrayal of the prevalence of Chubbies at Harvard.

Check back for our review of Episode 2, out later this week.