Flyby Tries: Being Vegan for a Week at HUDS 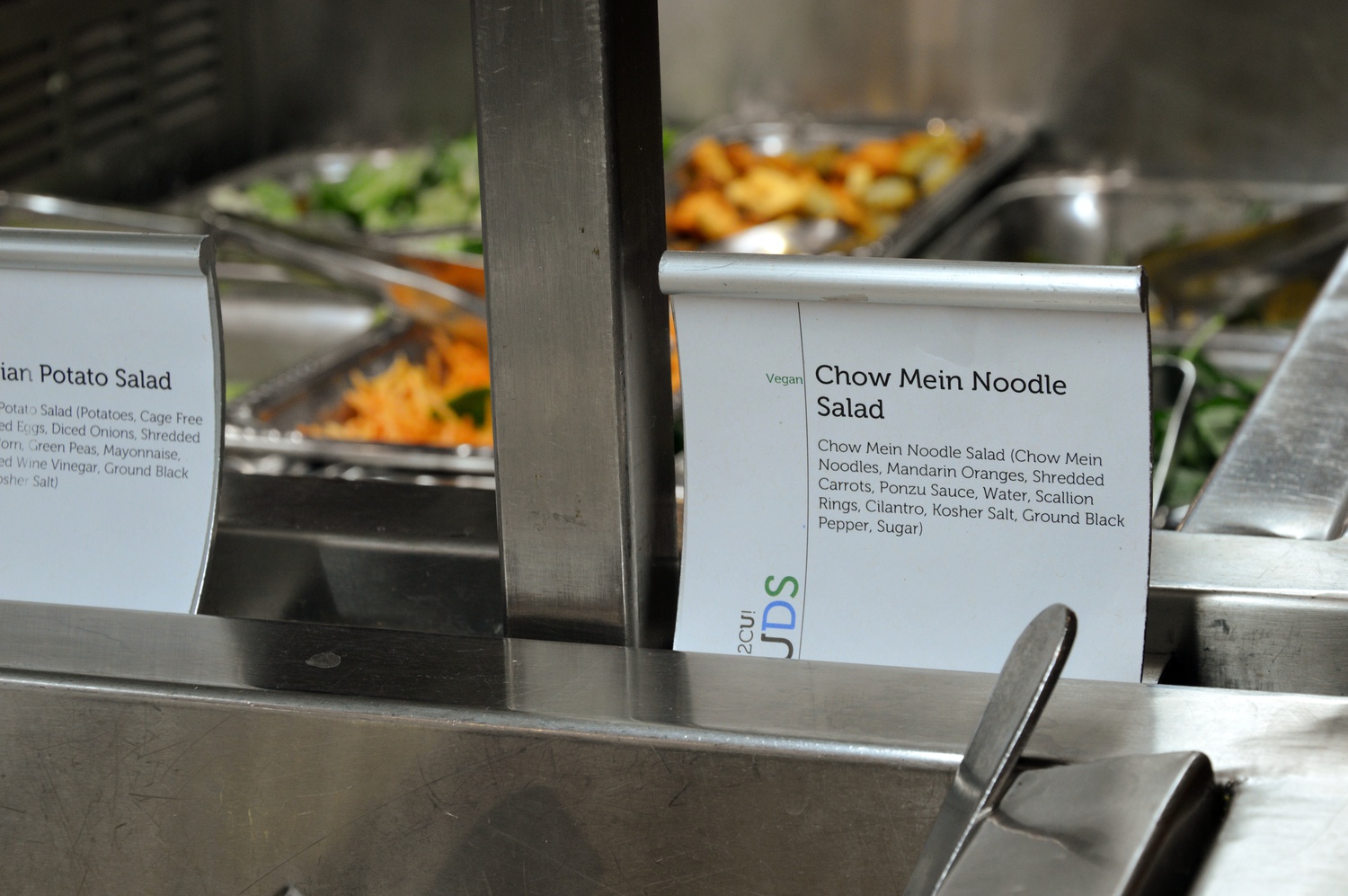 Ellen: Hi, I’m Ellen and I love chicken. My vegan friends have been bemoaning my chicken addiction, and to their delight, I’ve been shifting to a more flexitarian diet. However, I wondered what it would be like to completely cut out meat and dairy, especially at HUDS where finding vegan options seemed difficult. I wanted to understand the difference in meal accessibility for meat-eaters and for vegans.

Janani: Hi, I’m Janani and I love salad. I’ve been vegan for a while, and it’s not always easy in the d-hall. When Ellen decided to go vegan, in true solidarity, I decided to help her look for HUDS hacks.

Ellen: Like anyone else who has ever had a New Year’s resolution, I started out excited to try out egg substitutes at Berg breakfast. As an avid egg lover, I was most worried about vegan “eggs,” but HUDS delivered. I ended up pleasantly surprised, and even found myself enjoying the “eggs” after dousing them in Sriracha sauce.

Lunch and dinner the first day were surprisingly simple: I made a beeline to the vegan corner at Berg. Some of the entrées were completely different from the meat options, and I tried a lot of new foods, including seitan and falafel.

Day 2 dinner was when my willpower suffered. The free food event I attended boasted thick slices of pizza, covered in delicious, dairy-filled cheese and shredded chicken. It was tough, but I managed to stay true to the challenge and munched on vegan pizza squares.

Janani: The third day of something new is always rough, and the not-so-vegan HUDS dessert was definitely tempting — Mississippi mud squares, anybody? Ellen was craving chicken, and, I’m not going to lie, I was too. We were basically eating beans for breakfast, lunch, and dinner. But we stayed strong.

I introduced Ellen to Berg’s prized possession: the almond milk dispenser. No more having to give up coffee or cereal when you can drink all the almond milk you want. (Ellen tried the oat milk too, but it’s honestly a bit too watery.)

Janani: It was the fifth day that we both experimented with the HUDS vegan muffins. Turns out, these are an absolute gift from the universe, aka the HUDS workers in Annenberg. It is a big shame the upperclassmen Houses don’t have vegan muffins because they are now the best part of our days. Sadly, HUDS only makes one batch of vegan muffins every day, so if you want to be a happy vegan, you have to wake up early.

Ellen: The last days were tough, but certainly much easier than before. Being vegan felt more natural, and I found myself going to the plant-based bar out of habit. The Square has a surprising number of vegan options, and on the last day, I treated myself to a Beyond Burger from Veggie Grill — an absolute delight!

Final thoughts from the Vegan: Honestly, I learned a lot this week, and I am a little sad about being a lonely vegan again tomorrow. It was really fun to have someone to vent to/appreciate the ups and downs of being vegan with, and I’m going to work on getting my other friends to try veganism too.

Final thoughts from the Non-Vegan: I really enjoyed being vegan! I learned so much about the plant-based diet from Janani, like possible protein sources (go seitan?) and the secret gem of HUDS: vegan muffins. The hardest part was not staying vegan at HUDS, but at the campus events stocked with loads of non-vegan treats like Insomnia and cheesy snacks. Something else surprising: my skin glowed after cutting out dairy, which was a definite bonus along with the environmental benefits of veganism.

I don’t know if I could do this full time, but I’m realizing that more and more restaurants and eating services are changing to accommodate plant-based diets, making veganism far more accessible. I never thought I would say this, but as a result of my lovely friend Janani and this experience, I’ve decided to go vegan four times a week — leaving just enough time to keep my chicken addiction satisfied.