When we talk about being watched at Harvard, we always pin the blame on the tourists. Yes, it’s awkward when you accidentally walk into a stranger’s vlog and they keep the camera directly on your face, but we’re forgetting our most dedicated audience: Harvard’s beloved urban wildlife. They saw your shame when you trudged through the Yard, drenched in rain because you forgot your umbrella. They were there when you were stood up in front of Lamont. And they were there when you took one step outside your dorm building and realized you’d left your keys in your room. So here’s Flyby’s ranking of the urban wildlife on campus. Because let’s be real: they’re ranking us, too.

People act like these guys are a staple of the Harvard experience, but they’re just unnecessary. Nothing like walking around to the back basement entrance because the roach in front of the main entrance contributes to my growth or development.

I despise these creatures, but they are good for one thing: a lesson in perspective. Are you nervous for a test? For an upcoming interview? For your professor to roast the living daylights out of your essay? Go into your dorm, turn off the lights, and google ‘house centipede’. Suddenly, your professor taking a wrecking ball to your self-esteem is exactly what you need today.

Rats are nightmarish little things — especially when their stomping through the classroom ceilings is louder than your TF’s voice — but Open Letter to the Rats of Harvard really made me feel for these forsaken creatures. Maybe they’re just misunderstood.

The birds here aren’t the most entertaining in the world, but they’re surprisingly unafraid of humans. Besides their incessant 7 a.m. squawking, they’re alright.

Don’t get me wrong, I love puppers, but they’re going to have to take the number 3 spot. They’re adorable and surprisingly obedient, but there is so much FOMO that comes with watching proctors walk their dogs. When you first see them, you go “Aww! A doggo!” but five seconds later, you go “I want one too :(”

Those turkeys prowling the Yard make me so self-conscious. Sometimes they’re ambling down the street like they’re looking for someone to rob. Sometimes they’re sitting on the grass, watching people zone out through their million-page readings, watching athletes zoom by on their light-up scooters (seriously, where did you guys get those?), watching STEM students scramble through their psets as if they’re not about to be assigned five more as a reward for their hard work. And through it all, they’re staring us down, more judgmental than Harvard students watching tourists try to touch John Harvard’s foot. 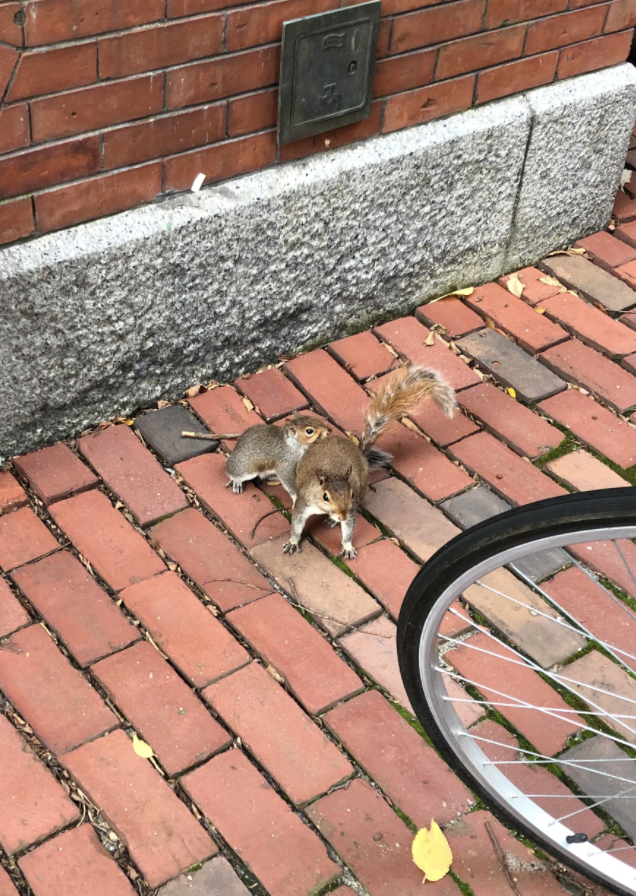 The roundhouse-kicked squirrel and its slightly apologetic attacker. By Evangeline J. Gilmer

There’s nothing more hardcore than a Harvard squirrel. One used to eat in the tree outside my window every morning so loudly that I couldn’t even snooze my alarm. I caught another literally trying to bite into a pole. And last, but certainly not least, I watched an adult squirrel scurry up a high tree and roundhouse kick its two babies off a branch. One stuck the landing and scurried away. The other face planted on the ground and lay there shaking for a bit (he was okay, I think).

At the end of the day, though, we love all our wildlife here at Harvard despite its quirks and faults. After all, it was a human that took the last plum in the dhall — not a rat.

Disclaimer: Remy the Cat was not ranked in this, because he is not part of the “wildlife.” He is our supreme leader.