The Crimson Brand Studio
Paid Post by NCOAE
What's This

by NCOAE, in collaboration with the crimson brand studio

A change in circumstance, environment or routine can create apprehension in the most fearless of individuals. And that’s especially true for the nine North Carolina teenagers raised in low-income families who recently participated in an intense, three-week wilderness-based, service-learning program, 4,500 miles from home.

Before heading off for the Alaskan backcountry this past summer, the teenagers—several chronically homeless and impoverished according to Federal guidelines—were asked to describe fears they had regarding the upcoming outdoor adventure.

Before heading off for the Alaskan backcountry this past summer, the teenagers were asked to describe fears they had regarding the upcoming outdoor adventure.

Each of these youngsters has been enrolled in a years-long North Carolina-based experiential education program called Education Without Walls. Which means they all have some experience in pitching a tent, building a campfire and keeping food out of the reach of bears.

But the thought of trekking hundreds of miles deep in the wilds of Alaska did present some concerns. In an on-camera interview before the trip, one participant said he was afraid he might wake up some morning and find himself sharing his sleeping bag with a snake. Another mentally explored the specter of darkness on the trail. Pitch-black, wilderness darkness. An “I've a feeling we're not in North Carolina anymore” kind of darkness.

Quenton Bowman, a 16-year-old student at New Hanover High School in Wilmington, N.C., faced the camera lens wearing shorts, a hoodie and a brave smile. “What I fear is not coming back a changed man,” Quenton said. 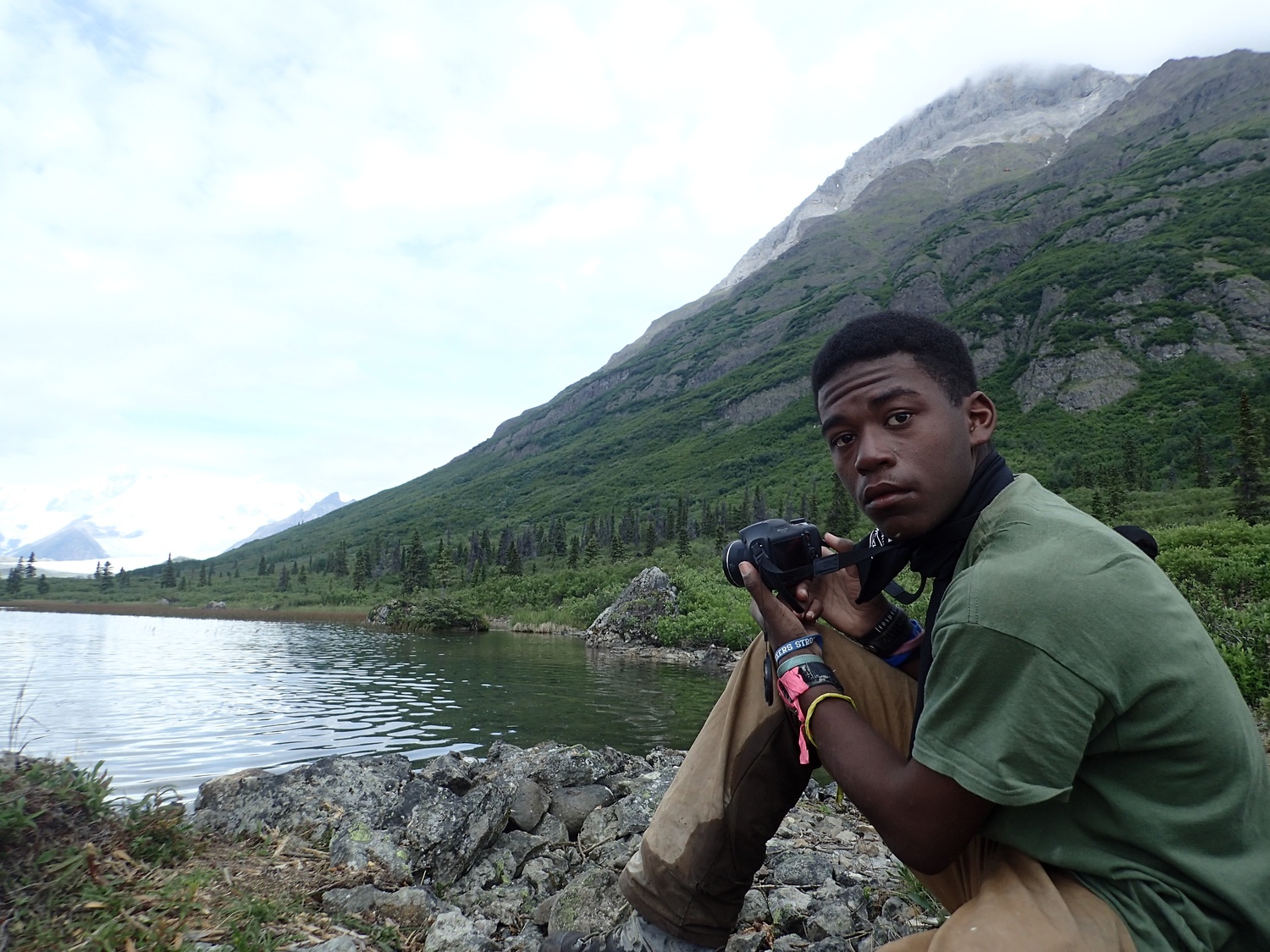 Quenton Bowman, 16-year-old student from Wilmington, in Alaska. By NCOAE

The smile faded just a bit and the teen dropped his eyes to the ground. “Because I don’t like who I am today.” The grin returned, and the boy looked back at the camera. “That’s just not the person I want to be.”

Finding Light in the Backcountry

Quenton and his teenage traveling companions are among a nationwide population of “disenfranchised youth” who find themselves homeless or living at or below the Federal Poverty Level. Joining Quenton on the 21-day excursion was Jack Conseco, another 16-year-old who attends New Hanover High School in Wilmington. Jack worried that he wouldn’t be able to keep up with the other nine students.

“I’m afraid I might not be able to pull my weight. I’m afraid the terrain may be too rough.” Then with a shrug he said, “I just want to put forth the best of my efforts.” 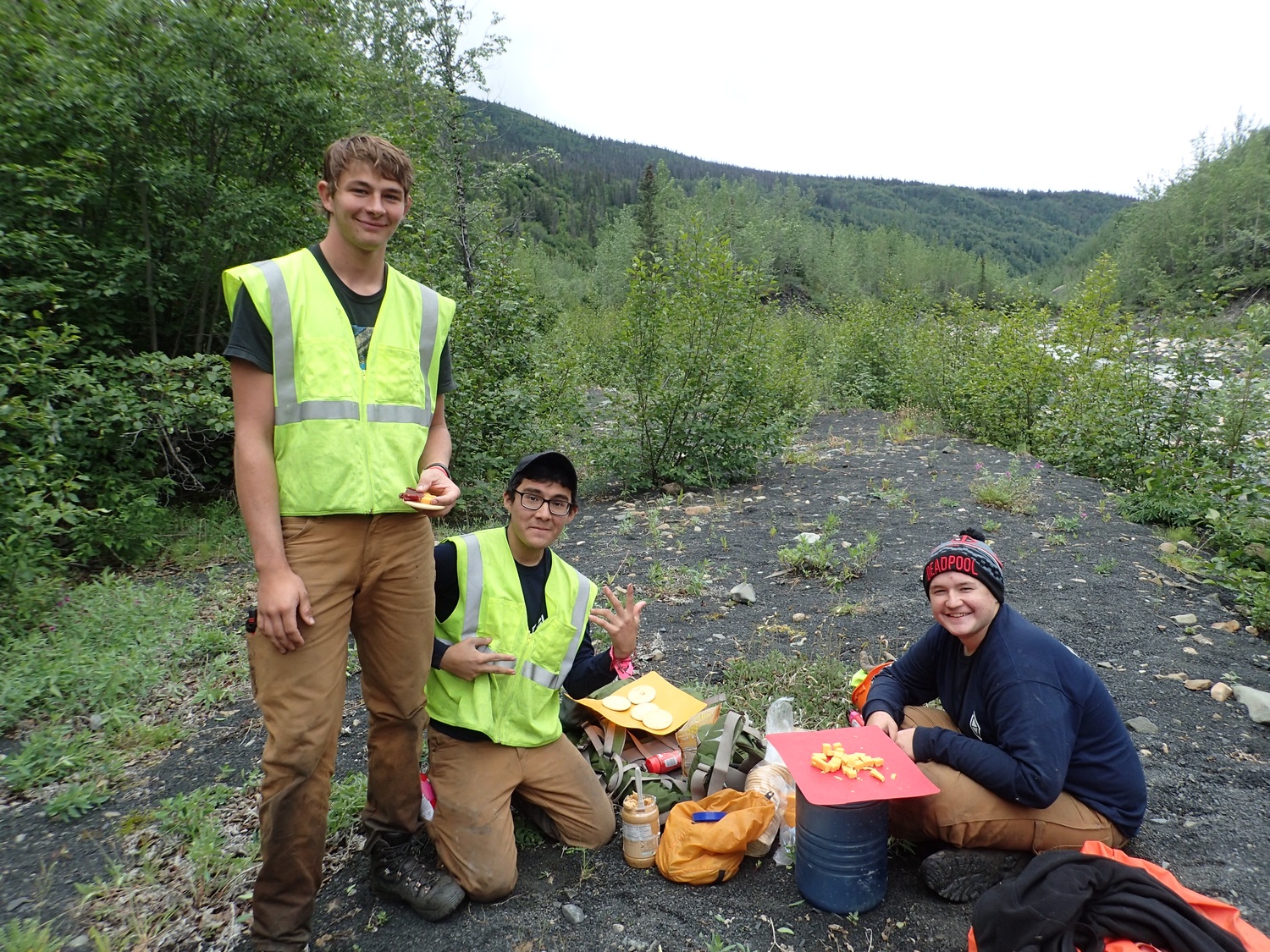 The Alaskan trip upon which these young people were about to embark was coordinated by The National Center for Outdoor & Adventure Education (NCOAE), a not-for-profit Wilmington, N.C.-based outdoor experiential education organization that, among other projects, mentors teens through its Education Without Walls program.

Education Without Walls is NCOAE's flagship program for disadvantaged youth, offering those who qualify the chance to make new friends, acquire new skills, and learn about themselves.

Education Without Walls is NCOAE’s flagship program for disadvantaged youth, offering those who qualify the chance to make new friends, acquire new skills, and learn about themselves—all while experiencing a series of outdoor adventures that are skillfully facilitated by NCOAE’s instructors and field staff.

Such trips are planned and guided by NCOAE-trained outdoor educators—often college students the organization prepares through semester and Gap year outdoor educator programs; extensive training that prepares these men and women to assume a variety of backcountry guide, instructor and administrator positions in outdoor and experiential education programs across the nation.

These instructors then accompany groups to dozens of outdoor “classrooms,” which are found in exotic locales, including wilderness areas in Patagonia, the Pacific Northwest, East Africa, the Himalayas, North Carolina and Alaska.

These instructors then accompany groups to dozens of outdoor classrooms, which are found in exotic locales, including wilderness areas in Patagonia, the Pacific Northwest, East Africa, the Himalayas, North Carolina and Alaska.

One of the organization’s objectives is to train educators who can then instill critical thinking, and facilitate the improvement of interpersonal relationships and civic and environmental responsibility, in their students through an impressive assortment of outdoor and wilderness adventures, all of which are influenced by NCOAE’s curriculum and practices, which have been accredited by the Association for Experiential Education.

In the case of the recent Alaska trip, NCOAE received a $25,000 challenge grant from the National Park Service to take nine local youngsters—all between the ages of 16 and 18—to Wrangell-St. Elias National Park and Preserve in south central Alaska over the summer break from school.

At 13.2 million acres, this national park is the largest in the United States, as well as the largest wilderness area in the National Wilderness Preservation System. In addition, Wrangell-St. Elias contains nine of the 16 highest peaks in the country. That’s a large classroom. 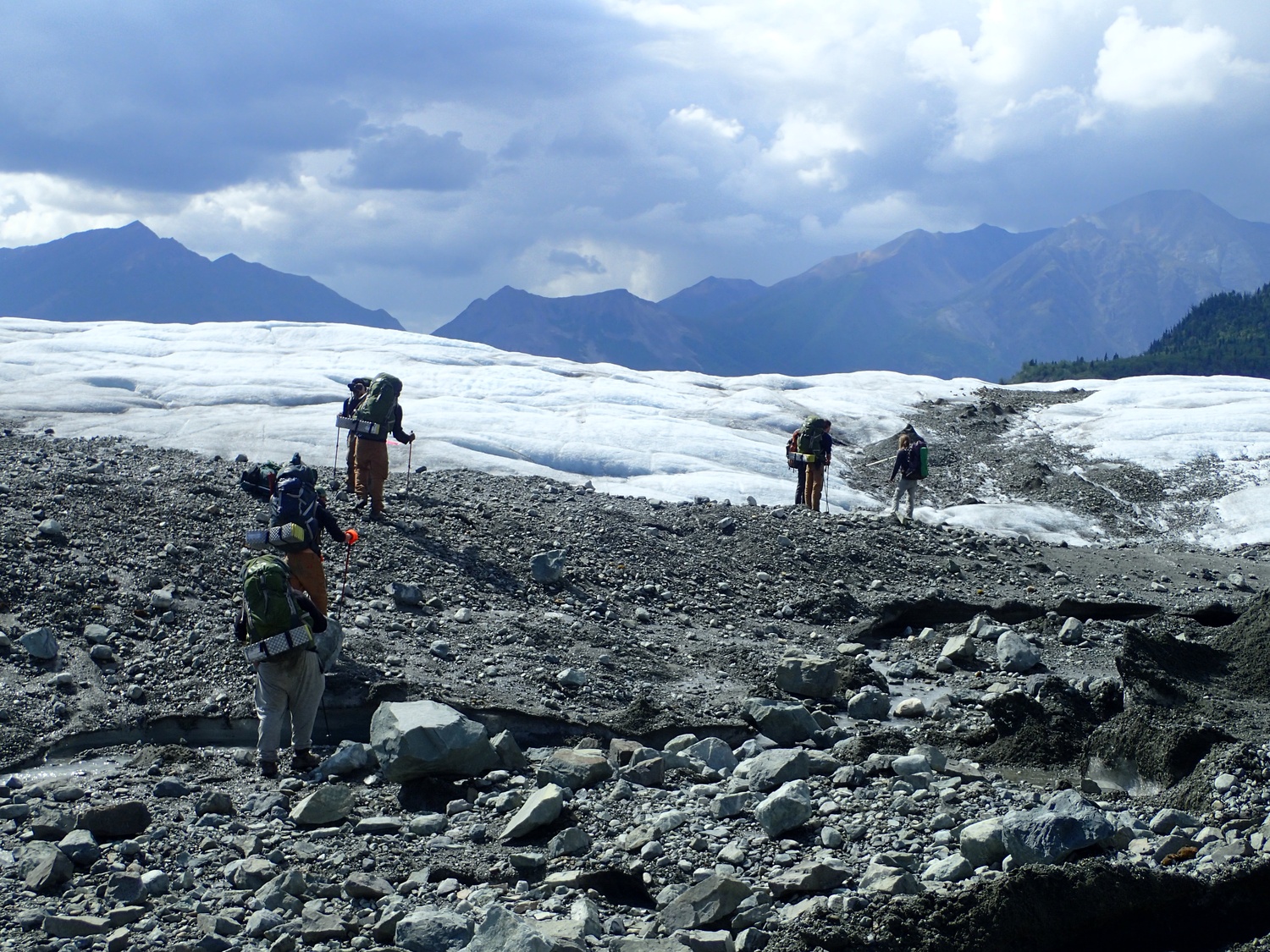 In this formidable, yet pristine, setting, NCOAE field instructors and their young charges worked side-by-side with National Park Service archeologists to repair trails and remove brush and woody debris from within the abandoned Chititu mining village. During their 21-day expedition, the North Carolina teens pitched in as a team to improve the historic mining site, a place where harsh weather and an ever-encroaching forest have eroded crumbling wood structures and features.

Instructing to the Benefits of ‘Wild Places’

Among the NCOAE instructors leading the Alaskan adventure was Wes Hawkins, an Alabama native with a love of the wilderness and a deep desire to pass that passion along to youth, “so they can reap the benefits of wild places.”

Wes received a degree in outdoor education from Georgia College and State University in Milledgeville, Georgia, and he said that, in many ways, this educational focus prepared him to become a proficient outdoor guide and teacher. “But it wasn’t until I started working with NCOAE that I became more confident and skilled as an instructor.” 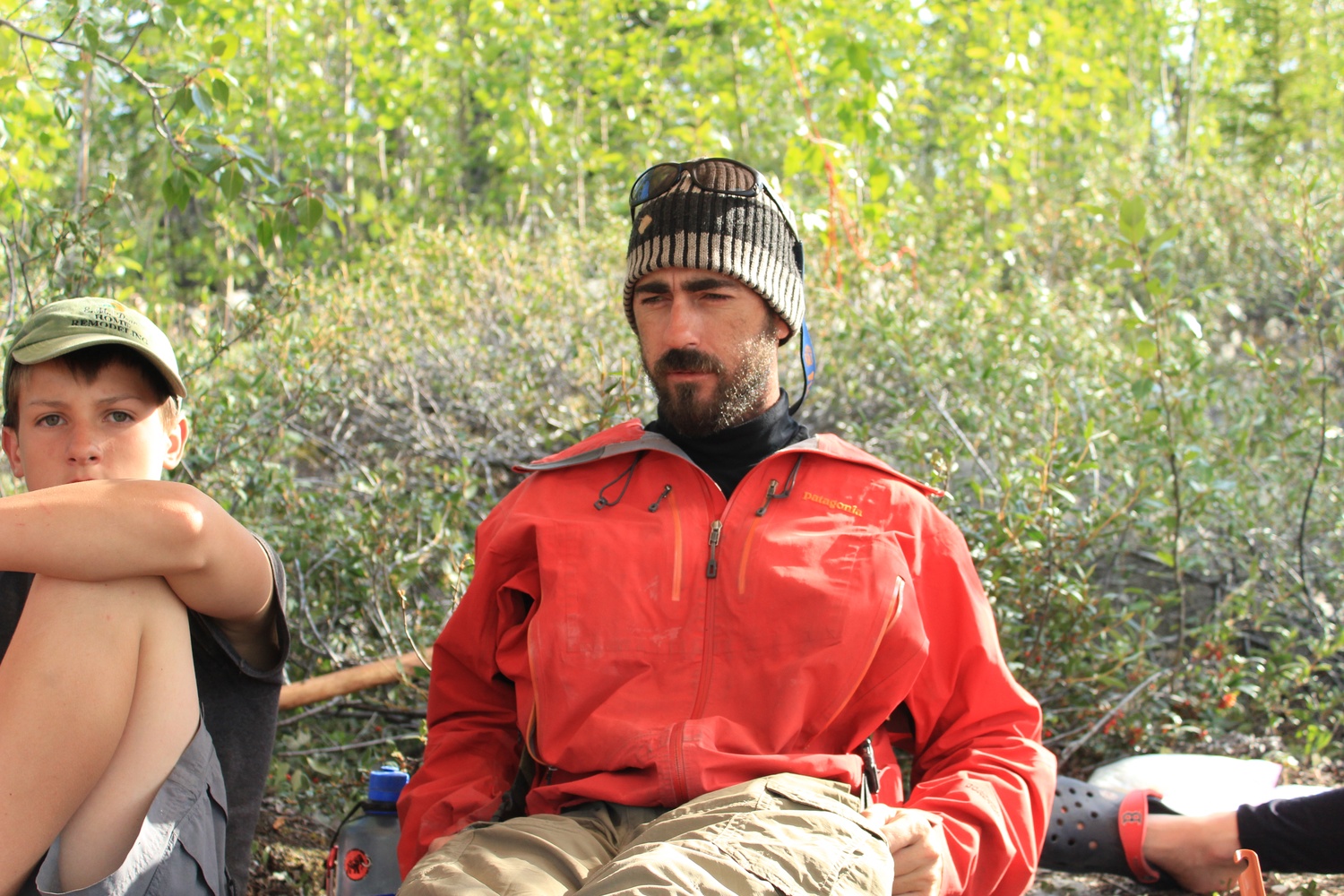 He said the center has provided him with some amazing experiences, adding he has also benefitted from several professional instructor development courses that enhanced his skill sets. “My skills in risk assessment, effective communication, lesson planning, and interpersonal development through NCOAE training have served me well, and are just a few areas where my learning can eventually transfer over to another career.”

What Wes enjoyed most about the Alaska trip was working alongside the students and the National Park Service in opening up the trail to the Chititu Camp. “Our group cleared three miles of rugged trail using only hand tools, such as hand saws and loppers,” Wes said. “I am very grateful to have been privileged to go on such an amazing trip. It was worth it just to witness the growth and teamwork those 10 students exhibited.”

The sense of adventure and solitude that the Alaskan backcountry provided was a highlight for all.

The NCOAE field instructor said the sense of adventure and solitude that the Alaskan backcountry provided was a highlight for all. “Being able to see grizzly and black bears in the wild, crossing vast glaciers with views of the second-largest ice fall in the world, and being surrounded by breathtaking views of the Alaskan landscape is something I will always remember and share with others.”

Coming Back a Changed Person

His young students echoed Wes’ enthusiasm for the outdoor adventure. Remember Quenton Bowman, who feared the trip would provide few rewards? In a video recorded after the teens returned home, Quenton said, “I came back a changed man.” 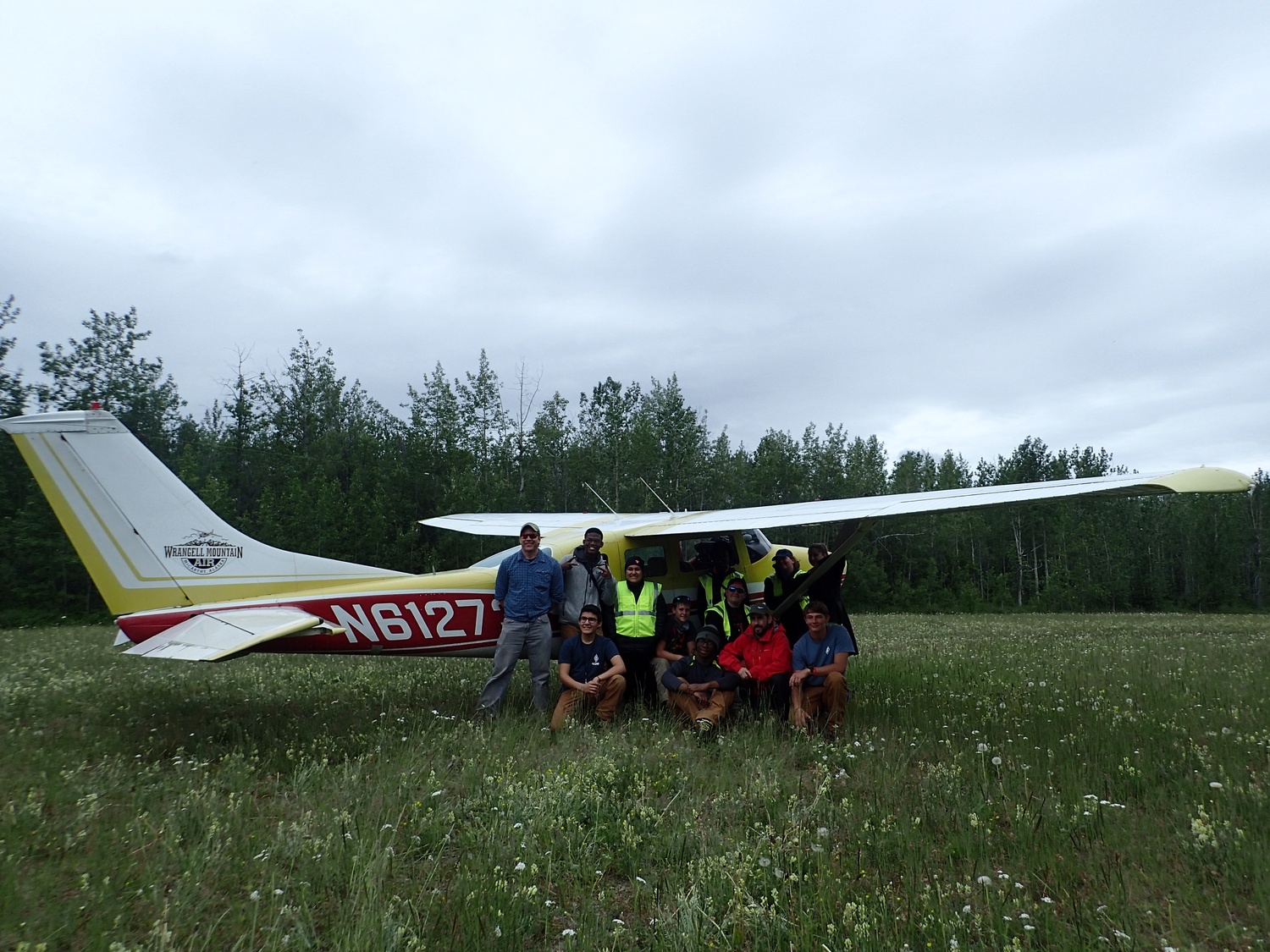 Before the adventure, he said, “I didn’t listen to what my parents said, I didn’t follow the rules at school, and I was slacking behind at school. This trip gave me time to find myself. I learned critical thinking and leadership.”

And Jack Canseco—who was afraid he might not be a solid contributor to the success of the trip—had this to say about the adventure: “At one point, I had to step up and be a leader because at 21 days, you’re obviously going to be at somebody’s throat.” Jack said he took the initiative, “and because of all the skills I learned, it came with ease.”

“It’s made me want to do more with my life, and it made me think anything is possible as long as I put my mind to it. I will never forget the memories we all made and shared as a group, as a team, as a family.”

"It's made me want to do more with my life, and it made me think anything is possible as long as I put my mind to it. I will never forget the memories we all made and shared as a group, as a team, as a family."

Kristen said she’d love to return to Alaska, “and share my experience with my family and friends. Alaska was the most beautiful place that I've ever been, and I want others to know about it.”

About the Author: Mikal E. Belicove is a freelance journalist whose credits include Entrepreneur magazine, Forbes.com, as well as all three editions of The Complete Idiot’s Guide to Facebook. Mikal’s next book, Strategy? You don’t know what the hell you’re talking about!, is slated to published in 2018. 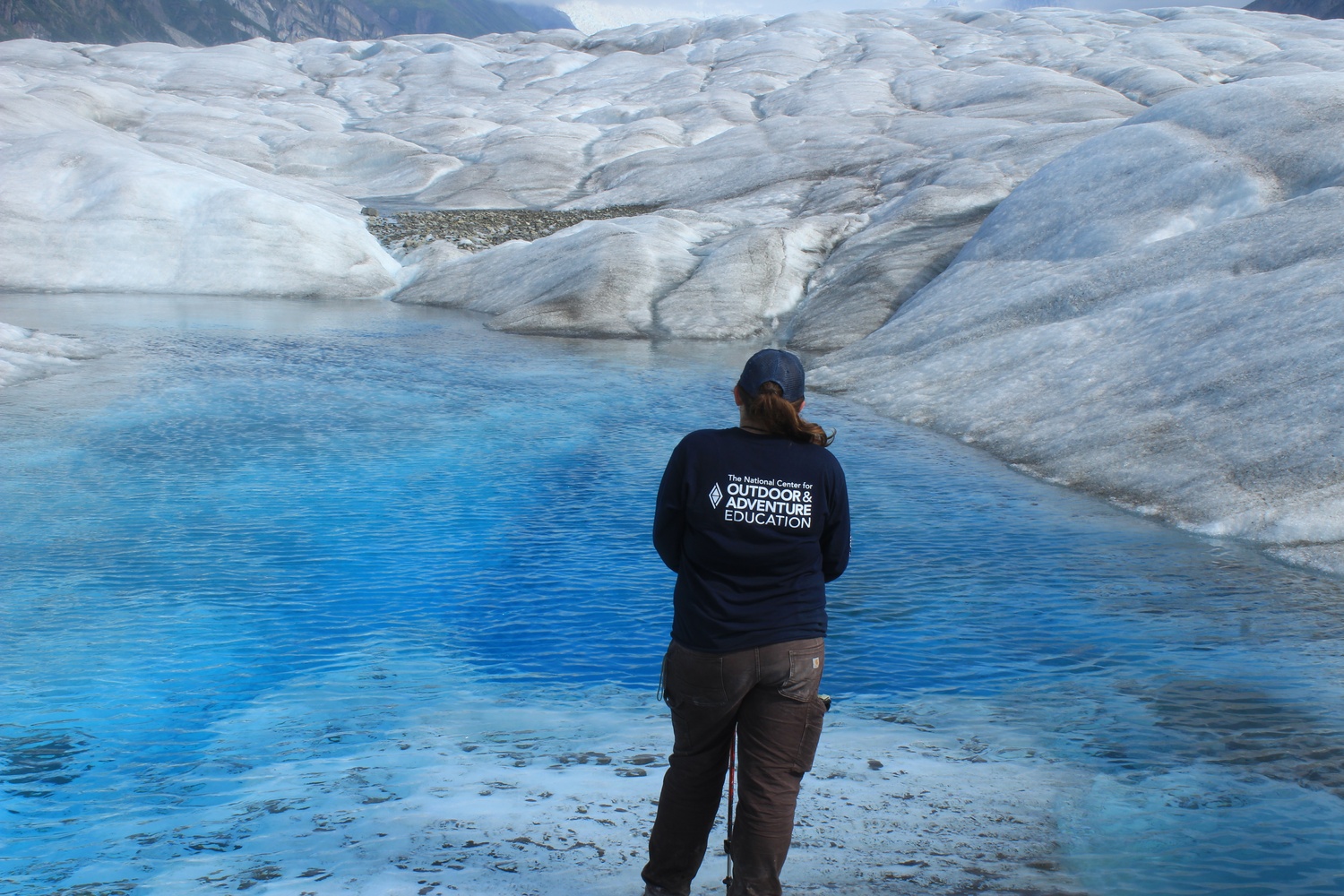