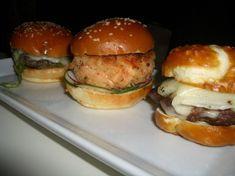 How every night's drinking should end.

DAPA's on a roll. Just a couple of weeks ago Harvard’s Drug & Alcohol Peer Advisors brought us their memorable, if hallucinatory, PSA on avoiding stress-related drinkage, and this weekend they’re continuing their "Kill The Hangover" campaign by offering some sweet deals at b.good:

Both tonight and tomorrow, Harvard ID holders can get a 2-for-1 deal on sliders between 11pm and 1am. And from 1am to 2am? FREE. SLIDERS.

DAPA’s aim in crafting the event was to “provide a late-night option that wasn't unhealthy and didn't provide an Animal House-type atmosphere where being wasted is the norm,” says Yale A. Zeller '10, chair of DAPA's Community Education and Outreach subcommittee. So non-drinkers get to hang out in a chill environment, and drinkers can sober up by cutting themselves off and also by chowing down, slowing their bodies’ alcohol absorption. More heads up on the deal after the jump. With 150-ish facebook event RSVP's, students should expect a crowd. Barring a Lamont/Felipe’s-style riot, though, DAPA and b.good are looking to continue their newfound partnership. "Every couple weeks we are planning on doing some great late-night or pre-drinking-time deals at b.good,” says Zeller. “Future deals won't be quite as extravagant, but they will be a lot of fun and hopefully get a lot of people to make safer drinking choices.”

Sounds excellent. FlyBy’s going to sign off now so we can get a head start on lassoing us a cheetah* cuz we cannot wait for those delicious, delicious burgers tonight. OM NOM NOM NOM.

*The Crimson and FlyByBlog are opposed to illegal drug activity and counsel their readers to avoid dangerous wild animals.