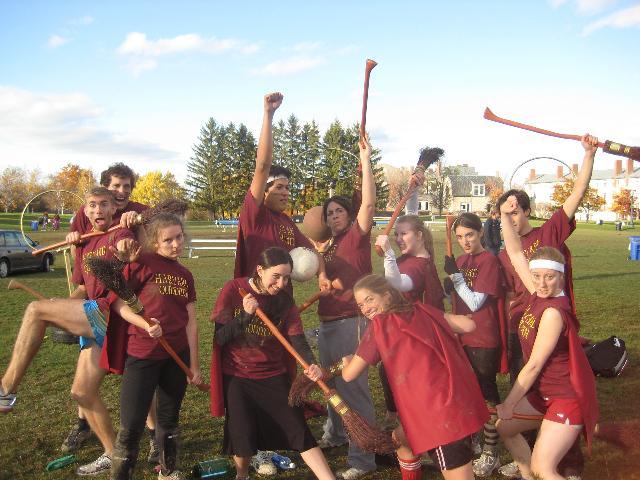 Quidditch may not be the same without flying broomsticks, but there's still no lack of competition for the newly formed Harvard Quidditch team.

For the first time ever, the Quidditch team undertook a grueling 4 hour journey to compete in the Intercollegiate Quidditch World Cup at Middlebury College, in a quest for glory, thrills, and a chance to emerge victorious in yet another contest against that college in New Haven. Twelve valiant competitors, an assorted crew including a member of the varsity track team and all diehard Harry Potter fans, boarded a bus in the predawn hours yesterday morning to face off against some of the most experienced college Quidditch teams across the country, running across grassy fields with brooms between their legs.

But when the Harvard team arrived, beating Yale was a simple matter of showing up—which the Yale team didn't manage to do, thereby forfeiting the match.

Read more about the blood, guts, and glory of the Intercollegiate Quidditch World Cup after the jump.

Harvard's other matches against BU, Emerson, and UMass Amherst proceeded less smoothly. In the words of Rush, "we were pulverized in the first one, beaten in the second one, and almost won the third one." Rush said that Harvard had been leading 30-10, but the appearance and capture of the Snitch was a game-changer, resulting in a 30-40 scoreboard (doesn't that sound suspiciously like Harry Potter's uncanny ability to save his team heroically, in just about every match?).

"You're allowed to do anything but pull hair," Biden said. But for the casualties, too bad there's no such thing as magical healing (a flick of a wand, a swig of potion, and Harry's always good to go).

As a relatively new team organized only two weeks ago, Harvard has a long way to go compared to eventual World Cup winners Middlebury—who founded the Intercollegiate Quidditch Association and who has won the World Cup every year since the first tournament in 2005. But according to Rush, the Harvard team has significant potential for improvement, given the natural athleticism of its members.

"We just have to get our game together and work out strategies," she said.