By Jamison A. Hill • 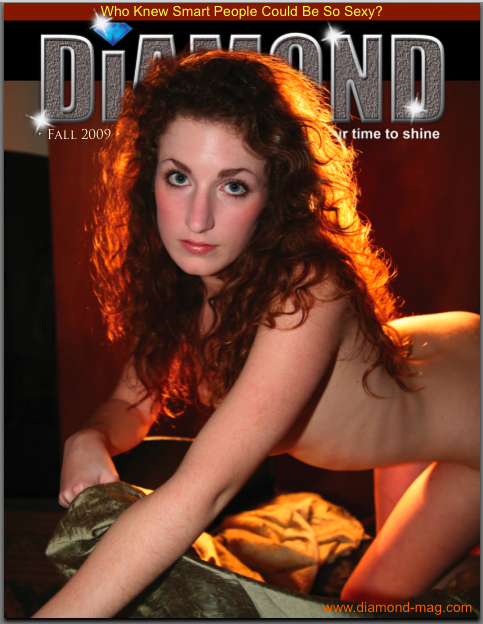 While you could purchase the full copy of Diamond’s latest release for the low, low price of $9.99 ($29.99 for the print edition), FlyBy is here for you, letting you know that this Diamond is probably not a girl's best friend.

Diamond Magazine, as you may remember, was launched in September of last year by founder Matthew M. Di Pasquale ’09. While H-bomb had long ago scandalized campus with photos of students’ naughty parts, DiPasquale was quick to point out that his publication would be different than H-Bomb’s—basically all of the nudity without that stupid artsy shit. The 41-page online-only pilot issue featured articles on the hottest new summer kicks, The Dark Knight, and college football, in addition to a veritable bevy of garish fonts and clip art. But those looking for some skin were sorely disappointed. The issue had two models, only one of which was naked—DiPasquale.

While the latest installment does feature DiPasquale in the buff again, this time he is joined by a whole host of co-eds from around the Ivies. Diamond's "Single Dame" is Andrea Smith, who the magazine says is affiliated with Harvard's Graduate School of Design. In her article-interview hybrid (it’s nouveau journalism) DiPasquale writes: “It was a tricky situation to contemplate, given that she is a Christian and that she’s done work for the Memorial Church at Harvard.” Let’s pray Reverend Gomes doesn’t find out.

Diamond aficionados will notice that DiPasquale is in considerably better shape than he was in the first issue, though he’s just as hairy. And while in the sample issue there are only two photos of him—one rugged and unshaven (“Rough Diamond”) and one clean (“Polished Up”)—those shots of his flaccid penis are as hot as ever.

And as before, DiPasquale does a hard-hitting interview with himself. In this one he claims that milk is the most carcinogenic substance adults consume. So milk is one thing we can be sure DiPasquale won’t be swallowing.

According to the site, the next issue comes out in April 2010. And with this issue you won’t be coming any time soon.