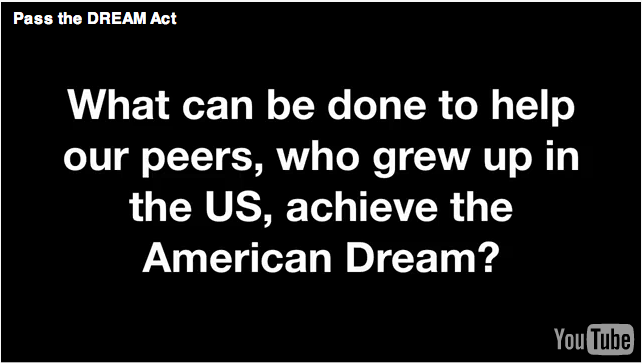 In an effort to raise public awareness concerning the DREAM Act and in order to get Massachusetts Senator Scott Brown’s attention, a group of three freshman students produced and filmed a public service announcement video.

The trio decided to highlight the stories of Harvard undergraduates and graduates who are illegal immigrants. Lewis had no idea what the DREAM Act was up until one evening, during dinner, one of her friends brought the subject up, she wrote in an e-mail to the Crimson.  She said she was surprised that Harvard alone admits 20 illegal immigrants, and that they end up with a world-class education but with, she said, nothing to do with it.

Even though the video was not a formal assignment for their seminar, the trio said they thought it would serve their goal of urging Senator Brown to support the DREAM Act, which was co-sponsored by the late Senator Ted Kennedy '54-'56.

The video contains real stories from the lives of undergraduates at Harvard and graduates from Harvard.  In an interview with his face in shadows, one graduate says, “For the last 15 years of my life, I’ve forgot what freedom means.” An undergraduate in the video says, “I was Mexican, and because of that I had no right to dream the dreams I was dreaming.” The video then urges viewers to write to senator Brown and to their congressmen in support of the DREAM Act.

Baker, Martin-Caughey, and Lewis expressed their aim to merge with the Harvard College Act on a DREAM group and help them with any activism-related activity next fall. Lewis said that she hopes that the DREAM Act would have passed by then.  If not, “We’ll be ready to continue advocating,” she said.