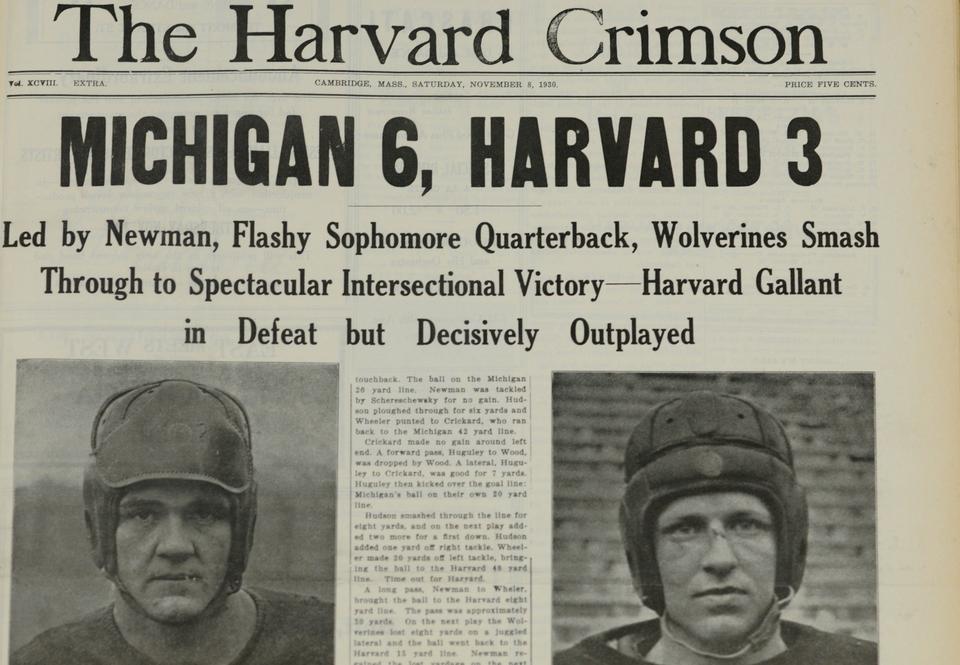 In the 1930-1931 school year, America was sinking deeper and deeper into a depression that would become the greatest in the country's history.

But from reading issues of The Crimson from that year, you might not be able to figure that out.

For one, Brooks Brothers regularly advertised in the paper, sometimes offering suits for as much as $150, about $2000 today, adjusted for inflation.

More than any national economic concerns, the state of student life and Harvard athletics continued to dominate the pages of the paper. As it did throughout the first several decades of The Crimson's history, sports were regularly the subject of the top stories.

The football commentary wasn't always the most politically-correct discourse. In a preview of a Dartmouth-Harvard matchup on the gridiron early in the academic year, for instance, a Crimson cartoonist drew a prominently-placed overly-stereotypical picture of an American Indian, at the time Dartmouth’s mascot, to mock the Crimson's opponents.

Harvard football's best decades years were behind it—the team had won its last national titleabout a decade prior—but the paper still devoted a great deal of coverage to a Nov. 8 Michigan-Harvard matchup, one which the Wolverines won, 6-3.

The other major focus of the paper was the change in student life, brought about by a House system only in its infancy. A Dec. 3 issue featured a large picture of the "New House unit which is named for Adams Family," one which looks more or less the same as the view from Bow Street today.

The Crimson also ran a story a few months later on Lowell House's first dance, saying that "a large percentage of residents will attend [the] first formal social even under [the] House system." Bacchanalia, alas, was a few years away.

Even intramural sports made it to the front page, though based on the game description, inter-House competition may not have improved much in the last 80 years—Lowell beat Dunster in a low-scoring 27-14 affair.

On October 1, 1930, the paper laid out some of the male social organizations on campus. Someof the clubs—the Delphic, Fly, and Fox, to name just a few—are familiar. But about a dozen other clubs also followed the same punching procedure laid out in The Crimson, including the Iroquois Club, the Kex Club, the Stylus Club, the Styx Club, the Trident Club, and Zeta Beta Tau, all of which have long-since disappeared from campus.

Even if the rhetoric was sometimes backwards (namely, the cartoon mentioned above), the school was becoming more diverse. Though the class of 1934 drew heavily from Boston Latin, Exeter, and Milton, The Crimson discussed the religious diversity of the school in an Oct. 7, 1930, article. Episcopalians were the best-represented religious group, with 20 percent of the student body, followed by, "The Hebrew total of 765, or 14.9 percent."