A Look at Mark Zuckerberg Through the Years 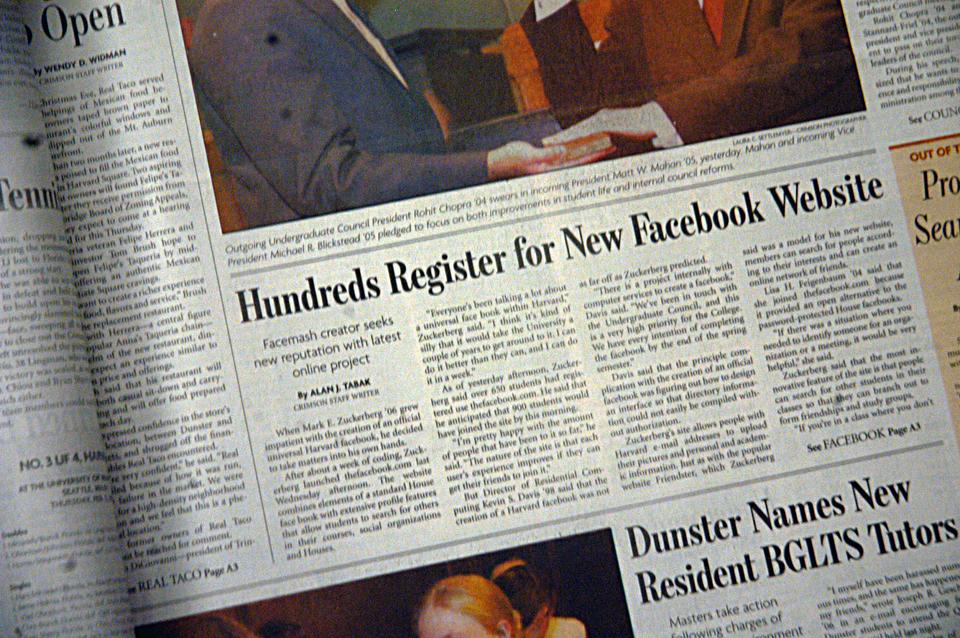 Editor's Note: This post, which was originally published in Oct. 2010, is being republished on the occasion of the tenth anniversay of Facebook's founding.

It goes without saying, but during his time at Harvard, Mark E. Zuckerberg wasn’t just another student. While he was here and even after dropping out, he was regularly featured in The Crimson.

To take get a sense of his life here at Harvard, we compiled a list of Crimson articles that chronicled his ventures. The list's long, but it includes all sorts of tidbits, including when Facebook expanded into Columbia, when Zuckerberg launched a file-sharing service that was similar to Napster, and when his competitors subpoenaed The Crimson to obtain notes reporters took while covering Facebook and ConnectU.

Zuckerberg talks about his earlier online businesses and his offers to skip college and work straight out of high school for companies like Microsoft.

The motto for Facemash summarizes the purpose of the site: “Were we let in for our looks? No. Will we be judged on them? Yes.” It's shut down within four hours after a firestorm of negative publicity, but in its short life, students vote 22,000 times—a number featured in the trailer for "The Social Network."

Zuckerberg lands in front of the Ad Board for the Facemash mishap, but he says that he was not suspended or expelled. In the movie, the charges he faced are actually listed verbatim from the article.

The site, which Zuckerberg says he created out of frustration with the official College Facebook, has 900 users just a few days in.

Facebook faces competition from a Columbia-specific social network, which accuses Zuckerberg of “Google-bombing,” a technique used to manipulate the first results on a search engine.

For the first time, The Crimson reports on the claim that Zuckerberg stole the idea for Facebook. Divya K. Narendra ’04, Cameron S. H. Winklevoss ’04, and Tyler O. H. Winklevoss ’04 had launched ConnectU.com a week prior.

The article discusses how, in just a few months, Facebook had created a minor social revolution.

Zuckerberg talks about Facebook’s rapid growth—from a few hundred users to 160,000 in five months—and says that while he wasn’t presently concerned with money, “I assume eventually I’ll make something that is profitable.”

Wirehog, a file-sharing program that would eventually be integrated into Facebook, is created to allow friends to upload and share personal files.

Zuckerberg faces legal trouble for the first time when the ConnectU founders sue him for alleged breach of contract. The Facebook founder maintains that his relationship with ConnectU was “informal.”

A Crimson staff editorial writes off the ConnectU accusations, commenting that the idea for this kind of social network was hardly original.

Zuckerberg and the other Harvard dropouts at Facebook talk about life in Silicon Valley, one which includes parties at Stanford and frequent venture capital suitors.

Zuckerberg releases the names of the four most visited pages of Harvard students on Facebook, and The Crimson interviews what it calls the “Fabulous Facebook Four.”

The announcement is made official during a recruiting trip to Harvard, though a Facebook spokesman doesn't rule out the possibility that Zuckerberg might return at some point. When asked about how much Facebook was worth, he declines to answer but does concede that it is worth “a lot.”

As part of its lawsuit against Zuckerberg, Narendra and the Winklevoss twins try to obtain records from The Crimson. The paper intends to fight the subpoena.

“Zuckerberg, in Sandals, Chats Up CS50”

Despite dropping out a few weeks earlier, Zuckerberg comes as a guest speaker to the introductory computer science class. He claims that Facebook received “millions more daily page views than Google.”