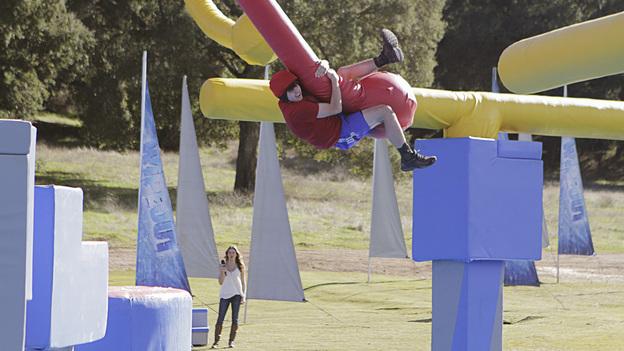 ABC's "Wipeout" features contestants constantly getting knocked down by objects coming out of nowhere and having to jump on to huge rotating wheels. Sounds like the source for a few easy laughs, but what about actually competing on the show?

With a generous push from his little brothers, Rodrigo J. Plaza '14, competed and won.

"I started watching the show when I was about 16 years old," Plaza said. "I would always tell my two younger brothers how I could totally win it, but at that point, I wasn't old enough to even apply yet."

Last summer, when he finally turned 18, his youngest brother reminded him of his promise, and after filling out an online form, going in for an interview, and passing a physical, Plaza was told that he had made it on to the show.

In typical Harvard spirit, Plaza figured he should be as prepared as possible. "When I was told that I had to get a physical done, I figured that probably meant I should start working out a bit," Plaza said. "I had a couple months to prepare before I actually went in for the first round, so I started working out a lot at the gym, and even swimming."

But once he got there, nothing could have prepared him for the tasks ahead. "There's really no secret to it. You have no idea what you're about to do, and what you're getting yourself into," Plaza said. "I guess it's all a matter of luck. And a big part of it, too, was perseverance. It was very tolling to constantly get knocked down, but I just had to push through it."

And pushing through is exactly what Plaza did. Making it through four rounds, Plaza won "Wipeout" and now has a freshly signed $50,000 check to boast.

What's he going to do with that great big check? "The only plan I've made so far is to travel to Europe this summer with my girlfriend," Plaza said. "Other than that, I guess we'll see!"