Harvard Protests Through the Years 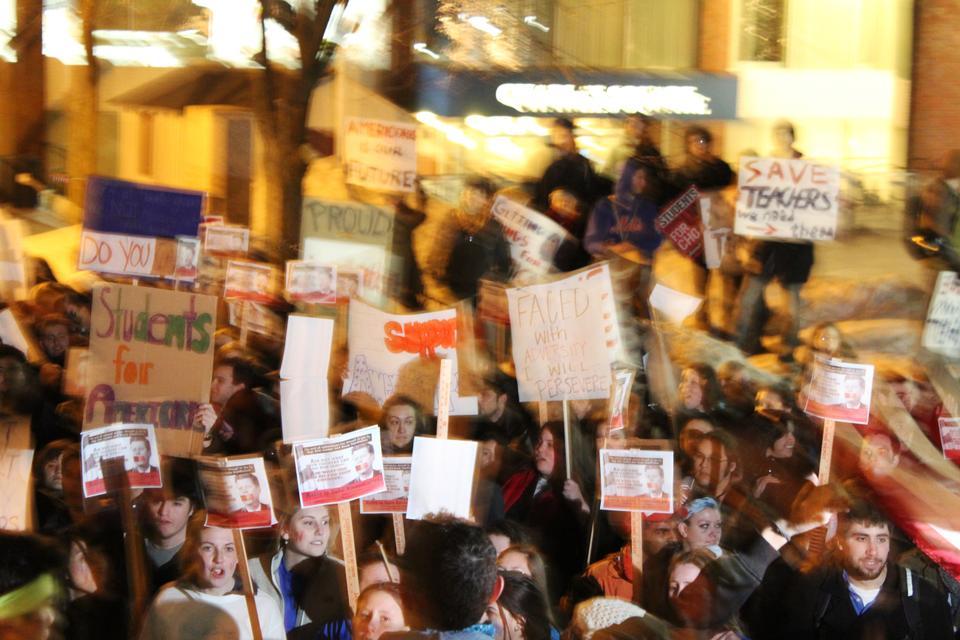 "Behold, our butter stinketh! — give us therefore, butter that stinketh not." With this cry, the Great Butter Rebellion of 1766, the first Harvard student protest ever recorded, began. Since then, student protests have continued to rock Harvard's campus over the years. In light of the Occupy Harvard movement, here's a look back at some of the ways in which Harvard students have stood up for what they believe in over the last centruy alone.

When Harvard College President Nathan M. Pusey announced that Harvard diplomas would be changed from their traditional engrossed Latin form to printed English, 2,000 members of the class of 1961 gathered on the steps of Widener Library in a 3-day protest. Eventually, police were called in to disperse the protesters.

During former Secretary of Defense Robert McNamara's visit to Harvard, the Students for a Democratic Society (SDS) requested that he participate in a debate on the Vietnam War. When their request was denied, SDS members ambushed McNamara, hurling accusations at him and forcing him to climb on top of his car for protection. Eventually, the police helped the Secretary of Defense escape through underground tunnels.

A recruiter from the Dow Chemical Company was barricaded for seven hours in the Mallinckrodt Lab as hundreds of students outside protested against the company's role in producing napalm for the Vietnam War effort.

Hundreds of students invaded University Hall and forcefully ejected the deans and other employees. The protest focused on the University's role in the Vietnam War, and demands included abolishing Harvard's ROTC program. After several warnings to the students, College President Nathan M. Pusey called in the Cambridge police who violently removed the student protesters from the Hall, sending more than 40 students to the emergency room.

In 1986, students constructed shantytowns in the Yard, which symbolized the living conditions of black South Africans, to urge the Harvard Corporation to divest from South Africa as a show of Harvard's disapproval of apartheid.

Members of the Progressive Students Labor Movement (PSLM) demanded a living wage for Harvard's employees. For 21 days, they staged a sit-in of Massachusetts Hall, and students, alumni and some employees picketed and slept in tents pitched in the Yard at night. Within a month of the sit-in, almost all dining employees were granted pay above Cambridge minimum wage.