The Burrito Brawl: A Case for Chipotle 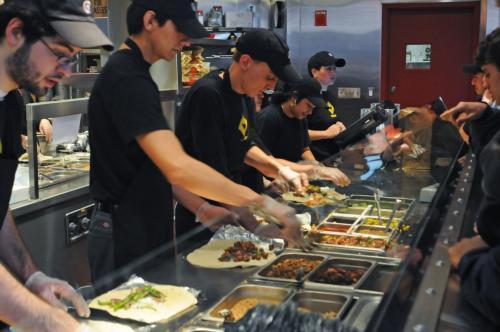 It's an argument almost as old as the burrito itself, and students for generations have devoted untold hours to debating the best burrito joint in Harvard Square. Over the next few days, members of The Crimson's summer staff will make a case the Big 4 of Square burritos: Boloco, Chipotle, Felipe's, and Qdoba.

Simply put, Chipotle is the best. I won’t sugar-coat it. And neither will Chipotle. The restaurant itself proudly proclaims, “It’s not just a burrito. It’s a foil-wrapped, hand-crafted, local farm supporting, food culture changing cylinder of deliciousness.” And they’re absolutely right. Because not only do they the best-tasting burritos on campus; they are also the healthiest.

Nevertheless, I’ve often heard otherwise from friends, colleagues, and passers-by. I’ve listened attentively. And now, I’m going to politely tell each and every one of you nay-sayers why you’re flat-out wrong.

In any Chipotle debate, the regular complaint is that it’s “too far.” Um, excuse me, far? Believe me, I know far—I was a Quadling once—and that ain’t it. What, are you walking to Mordor? Google Maps tells us that it takes anywhere from six to eight minutes to get that glorious place we know as Chipotle from most of the Houses on the river. (If you’re in the Quad, you’d be better off going to Anna’s Taqueria in Porter Square—it’s closer to you poor souls.) If you’re not willing to make that effort, then let’s face it: you don’t deserve Chipotle.

I’ve heard myriad suggested alternatives to the wrapped delights, each more ridiculous than the last. Most recently, when deciding where to go for dinner, a friend offered the following: “No, that’s way too long a walk. Can’t we just get a CVS frozen pizza and cook it back at my apartment?” This fool would rather walk almost as far as Chipotle, only to walk back to the Quad and have me watch him hopelessly sandwich the CVS slices two-by-two into his George Foreman Grill to warm them up. Take a lap, man.

Other than the alleged distance “issue,” what’s not to love? As I said before, it is, without question, the tastiest option.

Plus, the vegetables are organic and locally produced. Dairy cattle grow without the aid of dangerous hormones like rBGH. And Chipotle has set a goal to have 100 percent of its chickens antibiotic-free. Each of the menu options is produced with the freshest, finest ingredients around and that, above all else, is what makes them the best.

Still looking for a healthier option, but craving that same burrito? You can forget the tortilla and grab a bowl, saving calories and carbs.

So the next time you hear someone complain about Chipotle’s location or quibble over taste, tell them to take a hike—a hike to 1 Brattle Square, so they can try it for themselves.

Because that’s an experience everyone should enjoy at least once.