The Burrito Brawl: A Case for Qdoba 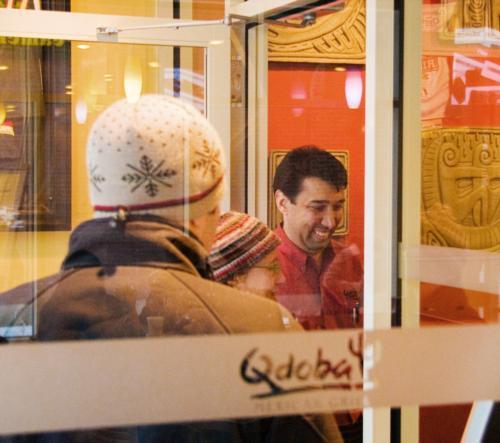 It's an argument almost as old as the burrito itself, and students for generations have devoted untold hours to debating the best burrito joint in Harvard Square. Over the past few days, members of The Crimson's summer staff have made a case the Big 4 of Square burritos: Boloco, Chipotle, Felipe's, and, now, Qdoba.

For those of you that love Qdoba, this article probably isn’t worth your time—you know it all, anyway. But for the less enlightened among you who don’t agree, allow me to explain.

We’ll start off with my favorite stage of burrito-brawling: the bashing. When you really think about it, it’s easy to see why anyone who goes elsewhere to satisfy their burrito cravings is seriously delusional.

Felipe’s? Taco Bell in disguise. If you’re looking for a low-quality burrito made with low-quality meat, cheese, and grease, then be my guest. Enjoy navigating through the drunken mob, its biggest group of customers—which says a lot about its food. As for me, I’d like to live past 30.

Boloco? If you want a milkshake, fine. If you want a bland burrito, I really have nothing to say to you. Ever. And mango salsa on a burrito? Something is seriously wrong with the world.

Chipotle? Some say it’s Qdoba’s biggest competitor. I say its over-spiced ingredients and plastic-textured tortillas make it Qdoba’s trash can. A trash can that’s way too far away, especially in the winter.

But Qdoba is classier than bashing on other restaurants, even if I’m not. Qdoba only needs to show off itself. Its meat, especially the steak, is fantastic, perfectly cooked every time. And its veggies are just as good—good enough to eat alone as fajitas, important for non-bean-eating clientele who couldn’t go elsewhere. Extras of most things are free, and adding another touch of sour cream and cheese makes any Qdoba burrito absolutely perfect.

Its location is ideal for any student who wants a quick bite, and its spacious interior fits all its customers comfortably (unlike Boloco, where your burrito is likely to get trampled if you drop it on the floor—where it belongs). And an abundance of coupons distributed throughout the year makes it even more student-friendly.

Qdoba. We saved the best for last.