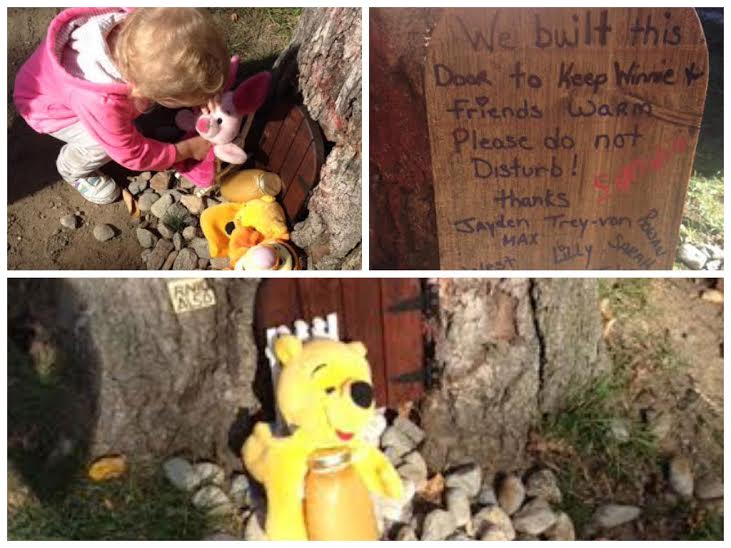 We all know about the disgusting "poopetrator" who roamed the halls of Yale earlier this fall, but lesser known is the “Pooh-petrator” targeting the beloved Winnie the Pooh house next to Harvard’s Science Center. Apparently, a pooh-petrator has been stealing the sacred door to Winnie the Pooh’s house since the summer, and keeps coming back. Luckily, our friends from Cambridge Rindge and Latin have come to the rescue time and again.

Flyby spoke with Betsy Bard, the teacher from Cambridge Rindge and Latin who noticed when Winnie the Pooh’s door went missing and decided to do something about it. Bard works at the daycare center for teen parents and teachers at Cambridge Rindge and Latin, and she said that she and the daycare students go to the Science Center about once a week to see Winnie the Pooh. While visiting Pooh’s house one day in the fall, the daycare students realized that the house had no door, so they took matters to a carpentry class at the high school.

“The kids in the class said they’d take measurements [for the door] and make a new door…those kids were really proud of it,” Bard said. The carpentry students heroically installed their first replacement Pooh door in October.

Then, a few weeks ago, Bard realized that the door had been stolen by yet another pooh-petrator.

The Winnie the Pooh house was clearly very important to the Cambridge and Harvard students, so the carpentry class once again came to the rescue. The students in the carpentry class made another door for Winnie the Pooh’s house. This time, Bard's daycare students helped out, making notes telling people that Winnie the Pooh needed a door for the winter. As adorable as the gesture from the daycare center was, the pooh-petrator was not phased. A few days later, Bard said, the door was stolen yet again.

Our heroes from the Cambridge Rindge and Latin carpentry class have just completed yet another door for the Pooh house.

As for the “pooh-petrator,” it appears that he or she is still on the loose, though Bard has alerted the police of the situation. So Pooh-petrator, beware. No one messes with Winnie the Pooh’s house.