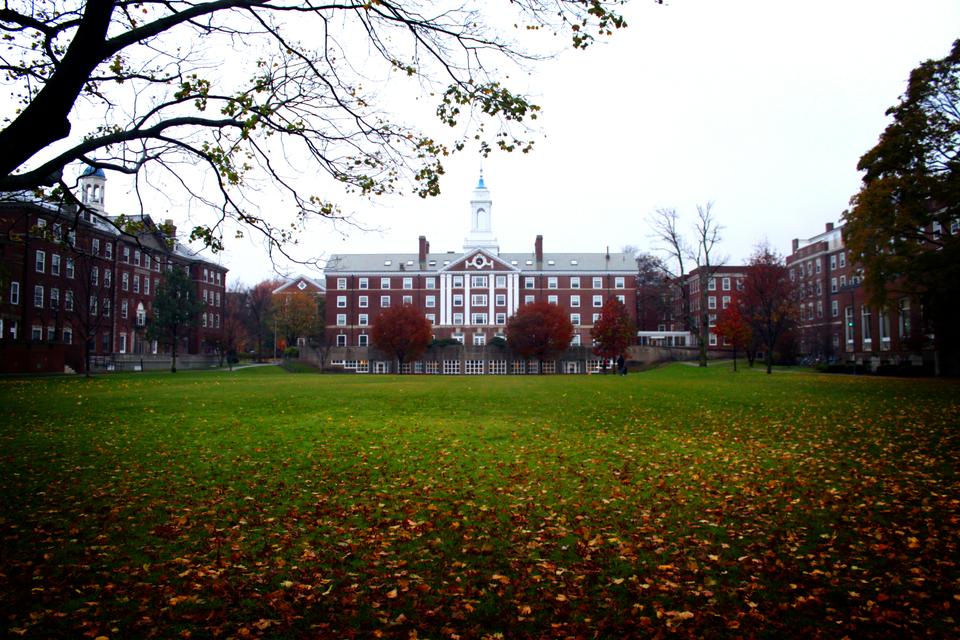 This year, Pfoho relinquishes its crown as the highest ranked House in the Quad and descends to number 8 in Flyby's Rankings. But fear not, freshmen—those placed into Pfoho will have little to lament. Instead, they will celebrate spacious bedrooms, a magnificent lawn, well-equipped facilities, consistent shuttle service, and a vibrant House community.

House Spirit: Pfoho residents rally around their two-letter cry to arms, "p-f." Some might say that adding a "p" before every word that begins with an "f" is excessive; to those critics, Pfoho says "pforget you." Pfoho students love their House and will defend it pfiercely to anyone who rags on the Quad. In the days leading up to Housing Day, students and House Master Nicholas A. Christakis wear head-to-tail polar bear costumes around campus as a public demonstration of their pf-love. Pfoho is also known across campus for its Housing Day videos that are clever takes on Internet memes. Take one, the Harlem Shake. Take two, Sh*t River People Say. Take three, this controversial Hitler parody from 2010, which remains a perennial favorite on campus. No one can say that Pfoho is not culturally relevant. With its determination to put its signature "p" in front of every pfreaking pfhrase, Pforzheimer proudly takes its place among the most spirited Houses on campus.

Housing Quality: Bunk beds are foreign to Pfoho students. Sophomores rarely receive doubles, meaning that most polar bears are guaranteed singles for all three years. Juniors and seniors most often reside either in top floor duplexes in one of the three "bricks"— Holmes, Comstock, and Moors—or in the highly-prized Wolbach suites with hardwood floors and gargantuan common rooms. Pfoho common rooms create a desirable space for socializing, unlike those in the river Houses that are usually small and cluttered with desks. Jordan is another housing option. The Quad of the Quad, it's annexed from the rest of the House but boasts kitchens, accesable facilities, guaranteed singles, and floor-length windows. Jordan is a favorite of athletes and students who cherish its proximity to Northwest Labs and the Law School.

Dining Hall: No other House boasts a two-tier dining hall. Pfoho's modern architecture features floor-to-ceiling windows that stream in sunlight at all hours of the day. Needless to say, "natural lighting" is a pfashionable pfhrase around the House. While some decry Pfoho's distance from the Yard, others do not think of it as a bother. The self-proclaimed "Pfoho lunch club" travels back to the Quad every day to eat in between classes. As for food, Pfoho's chef was formerly employed by the Four Seasons, so its dining hall offers a tasty array of meals. Pfoho's dining hall is also centrally located within the House. While students in river Houses must cross courtyards to eat, Pfoho students do not have to step outside. With the exception of Jordan, Pfoho is contiguously connected by breezeways. As former House Master Woody Hastings is rumored to have remarked, any student ought to be able to travel between locations in the House "in his PJs or less."

Facilities: Anything you want, Pfoho's got it. Pfhoto lab? Check. Pfilm room where you can check out DVDs? Check. Pf-recording studio in the basement? Check. Pfoho has a recently furnished Junior Common Room with dartboards, a pool table, a widescreen TV, and a distinctly modern vibe. Pfoho is also home to the Happy Room, a faux-seaside escape complete with patio chairs, tropical lighting, and trees (painted on the walls). While some cherish the room, others question whether it is overcompensation; as one tongue-in-cheek resident commented, "Pfoho has a Happy Room because it needs it."

House Masters: Wild card. Pfoho's charming House Masters, Nicholas A. Christakis and Erika L. Christakis '86, will transfer from Pfoho next year not to a river House but all the way to New Haven (gross) and Yale University (for shame). With new masters at the helm of the House next year, the mood and tone of Pforzhemier is yet to be determined.

Extra: Pfoho residents need not leave their House to find a good time. Pfoho is home to the popular 90s dance, bi-weekly Stein Clubs, and occasional Saturday movie nights featuring a popcorn machine. The House also has Pfoho Fridays, where many a cool cat goes to receive sustenance from local restaurants before heading out on the town. The building manager, Super(intendent) Mario, is superb at meeting all the needs of the House. Pfoho has several practice rooms and pianos on pianos on pianos, with concerts up the wazoo. Its proximity to Porter Square opens up the eyes of freshmen to a whole array of restaurants and shops that they have not yet explored. The shuttles offer frequent and consistent service, and walking distance to the Science Center is comparable to that of river Houses like Mather, Dunster, and Lev. Quadlings take advantage of the Quad Rec and twice weekly Pfyoga in the Pfoho Pfojo. Though the future of House Life is up in the air with the departure of the Cristakises, Nicholas and Erika leave a superb team of tutors in their stead. As Pfoho once said a couple of years ago, "The Quad Can't Even Handle [Them] Right Now."

Disclaimer: Flyby's 2013 House Rankings, though unscientific, are based on careful research and review by the Flyby Staff. We encourage you to read the full posts—rather than the rankings alone—to learn more about each House. As difficult as it makes our jobs, thereis good to be found in every one of the twelve.