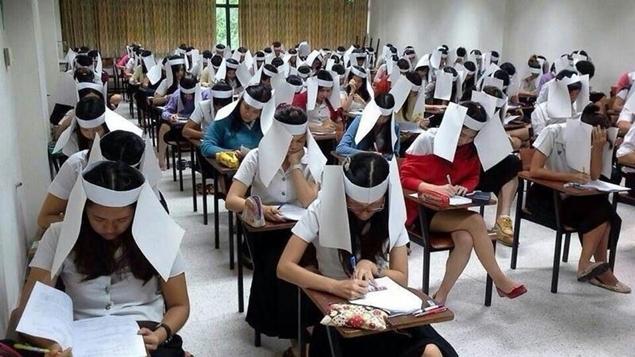 Anti-cheating hats worn during an exam at Kasetsart University in Thailand could be the answer to deterring cheating at Harvard.

At Kasetsart University in Thailand, dozens of students recently took an exam while wearing paper hats with side blinders intended to deter wandering eyes. The Wall Street Journal reported that the students helped make the blinder-hats after their professor asked them to devise a way to prevent cheating on the exam.

A photo of the experiment was reportedly posted on (and later taken down from) a school-affiliated Facebook page. But copies of the photo survived and went viral, to the great amusement of the World Wide Web.

A Harvard spokesperson did not immediately respond to a request for comment on whether the College might consider adopting this unconventional approach to policing academic dishonesty.