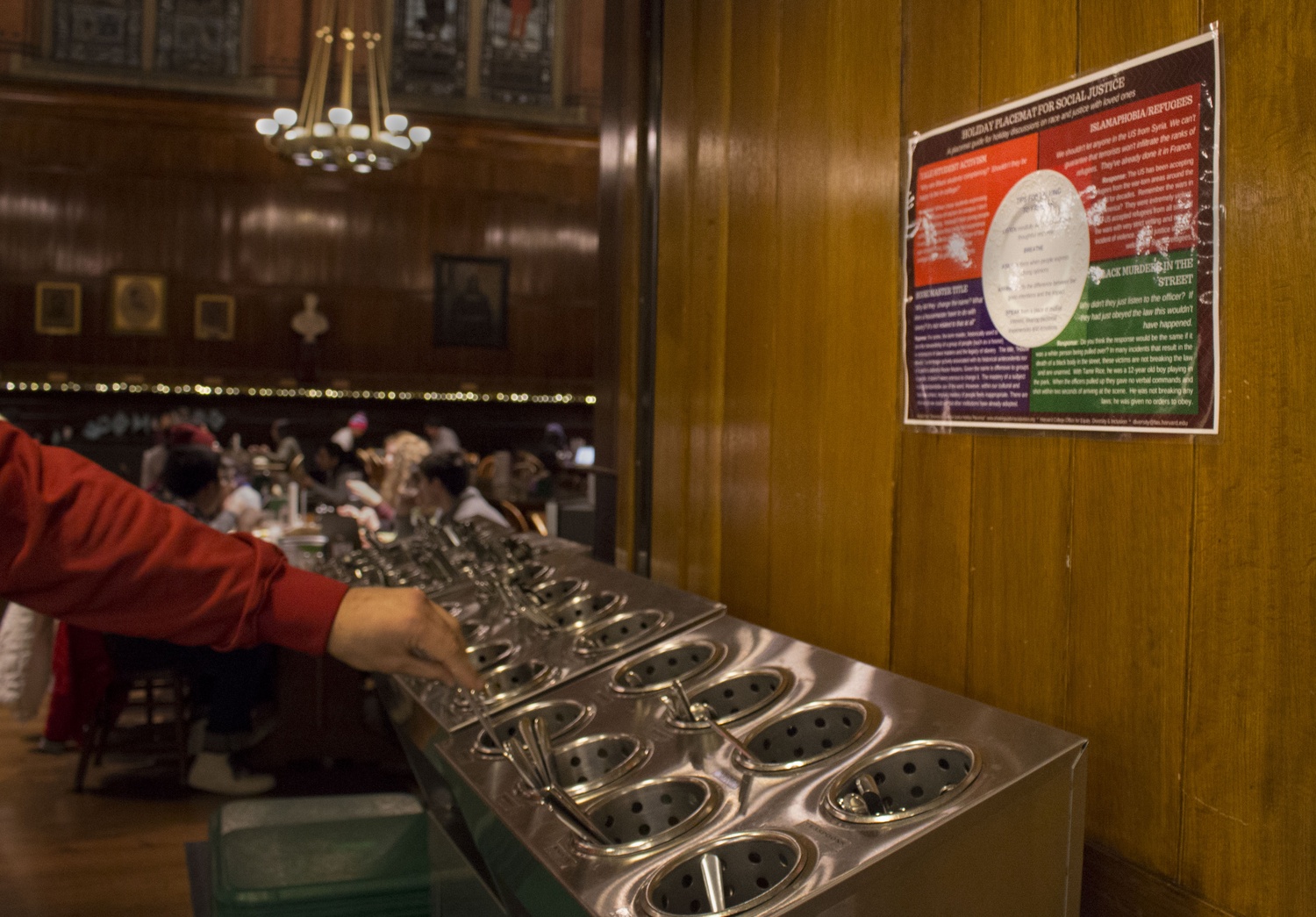 Last week, the College outfitted a number of dining halls with laminated placemats described as "[guides] for holiday discussions on race and justice with loved ones." Aaron I. Henricks ’16 said he found the publication of the placemats by an official Harvard office “beyond inappropriate and arrogant,” criticizing their one-sided presentation of “highly debateable subjects.” The placemats offer a single response to each proposed question. By Helen Y. Wu

Hey Harvard, hope you’re surviving finals and getting at least 2 hours of sleep a night. There are a mere 15 days remaining until the end of 2015. On this day in 1995, the name of the currency “euro” was officially adopted.

Catch of the Day, Fried

Harvard and Union Continue Contract Renegotiations
More than two and a half months after the expiration of their previous contract, members of the Harvard Union of Clerical and Technical Workers remain engaged in “very frustrating” contract renegotiations with the University, HUCTW director Bill Jaeger said Monday.

New Study Raises Questions of Access for HarvardX
A new study suggests online education may not be the panacea to income-based education gaps that proponents have claimed.

Law School Students Continue Activism on Race
With the semester coming to a close, some Harvard Law School students are continuing their push for changes they say will improve the school’s treatment of minority students, about a month after a high-profile racially charged incident shook campus.

College-Distributed Advice on Race Discussions Divides Students
At the close of a semester that saw a surge in racial tensions on college campuses nationwide, Harvard outfitted a number of dining halls with laminated guides printed with what purports to be advice for students discussing issues related to race and diversity with family members, but that some undergraduates decried as telling them what to think politically.

Nicky Maxwell Set To Make History for Harvard Men's Track and Field Team
Nicky Maxwell, a College freshman, will become the first NCAA-certified athlete in track and field history to compete with a prosthetic running device when he makes his debut for the Harvard men’s team in January.

Harvard-Yale Rivalry Goes Beyond the Game
The rivalry between Harvard and Yale runs all the way back to the inception of intercollegiate sports in the United States.

Three Years In, Lehrer Continues to Transform Men's Soccer
As soon as the final whistle sounded in Harvard’s 6-0 win over Penn on Nov. 14, Crimson men’s soccer coach Pieter Lehrer began thinking ahead to his team’s next game.

Climate Change: Health and Disease Threats — Come to the Leadership Studio at the Harvard T. H. Chan School of Public Health for this lecture at 12:30 p.m.