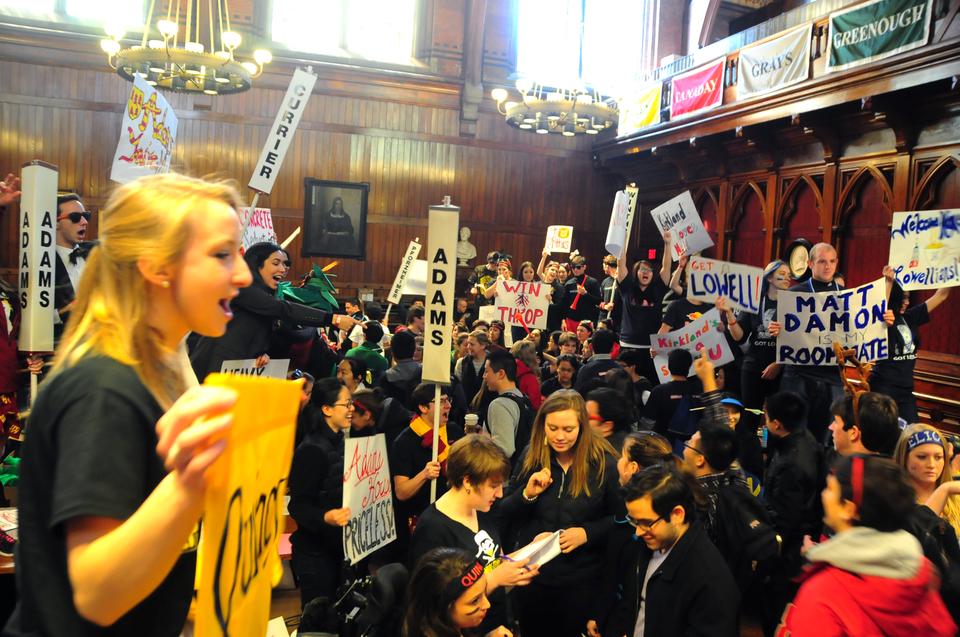 Now that Housing Day videos have been released, and the best day of the entire semester is upon us, Flyby writers Sruthi and Brandon have set to the difficult task of ranking all of them (instead of, you know, studying for midterms).

Sruthi: Even though Dunster and Pfoho had essentially the same video this year, Dunster won out in the end. The video editing skills for this video were out of this galaxy (pun intended). That first shot with Dunster House in the middle of the desert was gold.

Brandon: Yeah, Star Wars seemed to be the go-to theme this year, but Dunster killed it with the video quality. I was halfway convinced that the Housing Video was coming out of LucasFilms studio. The moose at the end was the icing on the cake.

Sruthi: To be honest, picking between Dunster and Pfoho was the hardest decision. Pfoho’s great play on “The Pforz Awakens” was genius.

Brandon: I agree! Will Greenlaw’s cameo as Finn in the Pfoho video almost made me do a spit take the first time I watched the video.

Brandon: As a former member of an a capella group, I have to give Mather mad props for pulling off an a capella rendition of “Rather Be.” Plus, they went all out in the end with a full, high-school musical like dance routine.

Sruthi: Yeah, Mather definitely gets extra points for taking the time to arrange the song. I think using Rather Be was a great idea, and the lyrics throughout the song were great because they actually changed them to talk about the house.

4. Winthrop: All I Do Is Winthrop

Sruthi: Winthrop’s dancers are killin’ it, but the video could definitely have been way shorter. 7 minutes is a long time to dedicate to my procrastination. Props for using a song that fit the House name in though: All I do is Win(throp).

Brandon: I mean, you figure we all have the attention spans of ants by this point in the semester, so going with a super long video wasn’t the best idea. Their mascot was the redeeming quality—I could watch that lion dance all day long.

Sruthi: The dream sequence was clever and took Leverett beyond the standard “music video” Housing Day video. Also, it was great to see a bunch of Leverett people get involved. The music video just seemed like a lot of fun to film. I’m not one to listen to Fetty Wap very often, but even I could tell this was well executed.

Brandon: Shout out to Flyby Writer Kamara for making it rain in the dining hall! But seriously, any house that went the Fetty Wap route automatically wins in my eyes. Plus, the vocals were good. Definitely better than some of the Fetty Wap emulators you hear at parties. Yaaaaaaaas.

Sruthi: Drone footage gives Lowell lots of points. I feel like a lot of the same footage was used though so it got a little repetitive for sure.

Brandon: Tea-time in Lowell House never looked so lit before. It’s a shame that we’ll only get a year of Lowell Tea if we’re sorted into the house. The only reason we didn’t rank them higher is because of how misleading the clip about Lowell Steins was; that looked more like a party at Yale than one at Harvard.

Sruthi: I was really impressed by the attempt to recreate the dancing from the actual video. The Flyby compers last semester made a music video recreating this same song, and so I recognize the difficulties that come with attempting those dance moves. That being said, it was a pretty average Housing Day video, and that’s why it ended up in the middle of the pack.

Brandon: Sruthi, we can actually never talk about that video again. My dancing was so bad… Considering that, you are totally right: you have to give the upperclassmen of Eliot House props for matching the pretty sick moves of the “Sorry” dancers. Speaking from experience, it is very hard to move your body like that, and I’m sorry we ever tried.

Brandon: Nice save, Kirkland. The original Kirkland video was unsettling… Not Quincy Man-Penguin unsettling, but nerve-racking. As if I wasn’t stressed out enough with midterms—I definitely did not need a bunch of upperclassmen yelling at me. They got points for trying, though. But going for a Hamilton-spin when every other video went for pop songs? That was definitely one of the best decisions they could’ve made. It definitely bumped Kirkland up from the bottom of the list. I’ve been humming that tune all afternoon.

Sruthi: I’m going to admit, I haven’t seen Hamilton yet, but I really want to. After Kirkland’s rendition, that desire has definitely gone up. I agree with Brandon that not going for the classic pop song gets them points in by book.

Sruthi: As a freshman, I feel like this video didn’t have anything that grabbed my attention out of the several other videos I’ve been watching the last few days. I would like to point out that the little kids in Adams’ video are positively adorable. The few seconds they were in the video were great.

Brandon: Were they twerking? I severely hope they weren’t twerking… But I don’t know, I just wasn’t feeling the Adams housing video, and this is coming from someone who has prayed to the Housing Gods for Adams house.

Brandon: I was waiting for someone to do a rendition of “Hello,” and Cabot finally came through. I LOLed when the main singer went off on that tangent about how far away the Quad is. I totally feel her—the Quad isn’t that far away. Plus, any video with a Rakesh cameo is cool in my eyes.

Sruthi: Okay so the star of Cabot’s video is Dean Khurana which is clearly a winning point. The issue with this one was it was a little static just because the song is so slow, but it was still a great way to show off the house.

Sruthi: Yeah, I’m not sure if the Snapchat video route was supposed to be a new hipster technique for creating a housing video, but it didn’t work. For one thing, I couldn’t really hear what was happening in the videos, and I’m not sure I actually got to see anything clearly because of the quality.

Brandon: I agree, the Snapchat video was not the best choice. I was actually heartbroken to find out that this was Quincy’s official Housing Day video instead of their “Man-Penguin” episode. Seriously, it might have been one of the weirdest things I’ve ever seen here at Harvard (and that’s saying something), but at the end of it I wanted to see more. RIP Man-Penguin, and shoutout to whoever did the vocals for the video!

Brandon: This one was so bad that it actually got taken down by the house. I get the Trump theme and all, but I guess people are so disturbed by the idea of him being president that a video revolving around him was just too disturbing?

Sruthi: Yeah I guess this was just too close for comfort? I like the facial expressions for the Trump actor. Those were definitely on point. But overall I just felt like this video spent more time hating on other houses than actually letting people know what Currier’s all about.