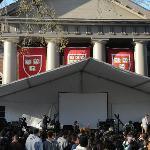 Yardfest is almost here—count down with us! Check out our guides to Kid Cudi, Parick Park, and Wale, then watch for more Yardfest features to come. Tonight, we present to you the history of Yardfest at Harvard.

For the past sixteen years, Yardfest has wrestled rainy days, low attendance, and little funding to retain its place as the College’s spring pep event. Yardfest, previously known as Springfest, began in 1994 under the leadership of the Undergraduate Council as a way of bringing together the undergraduate community—and as a way for the UC to rally from a botched concert that cost $20,000 earlier that year.

Then UC Committee for College Life co-chair John A. Mann ’92-’94 told the Crimson that Yardfest would be “one day when everyone at Harvard from gov jocks to pre-meds puts aside their work, leaves their rooms, and comes to the Yard where we all started off.”

However, band selection, booze—the Dean of Students at the time, Archie C. Epps III, banned kegs in 1998 followed by a complete ban of alcohol in 1999—and battles with the President’s Office over control of the event after joining forces in 2002, proved to be divisive issues.

The biggest controversy came in 2005 when the UC’s Campus Life Committee had to cancel Wyclef Jean’s performance because of low ticket sales. In the wake of student protests and a $30,000 loss, the UC passed control of College-wide social event planning to the newly formed College Events Board. Backed by a $200,000 budget from the Dean’s Office, the CEB, in partnership with the Harvard Concert Commission, sponsored a successful Yardfest 2006 headlined by Ben Folds, with an audience of 7,000.  Since 2006, the CEB has succeeded in balancing alternative and big-name bands, drawing 7,100 students last year in what was record attendance.

A History of Yardfest Performers:

2003: No band, UC to save funds for bigger event in the fall

2005: Half Nelsons, Tommy and the Tigers, Seeking Homer, and Toussaint and the China Band