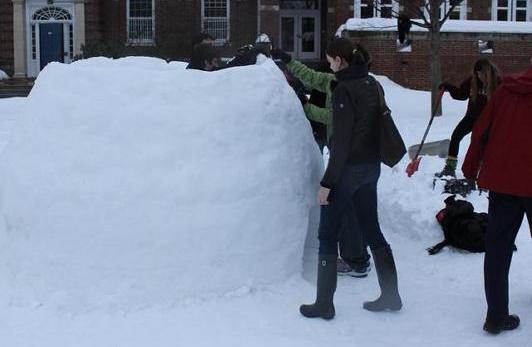 The phrase "get a room" took on a whole new meaning earlier this week after Cabot House resident Romeo P. Alexander '11 retrieved remnants of those who had done the dirty—"Eskimo style"—in the Cabot House igloo.

"I was standing outside of the igloo with two other Cabotians as well as a young mother from the neighborhood with her son of about eight years old," Alexander said in an e-mail. "The mother and son went in briefly, only to come back out shortly after with the mother complaining about the presence of a condom inside."

Upon entering the igloo, Alexander said that he found the condom alongside a set of trash bags and a pair of 3D movie glasses.

"One of the other Cabotions disposed of the condom with the trash bags. With the condom gone, the mother felt like the igloo was now child-friendly enough for her to take her son back in," Alexander said.

Although Alexander mentioned that a number of "eccentrics (mostly math and physics majors, of course)" had slept or done homework in the igloo since it was constructed, the identities of the frigid fornicators remain a mystery.

"Whether it was these same people who boned in the igloo, I do not know," Alexander added.