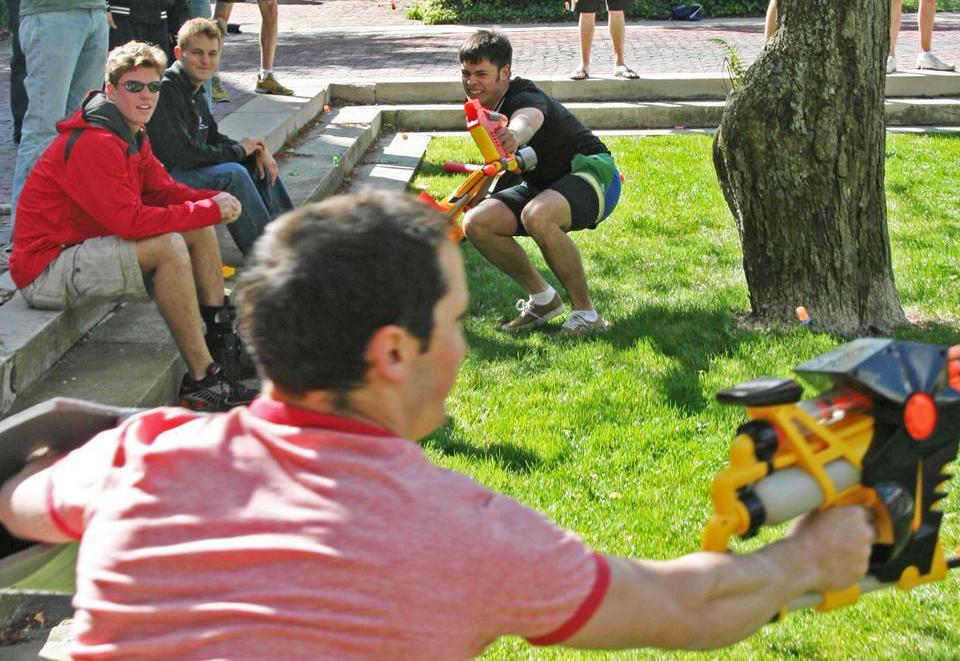 If you suddenly find yourself in the midst of a vicious water gun fight on Mt. Auburn Street, or if you happen to witness fellow students wielding plastic spoons like grenades, do not fear; you are not crazy and these events really are taking place.

As is traditional at this time of year, several upperclassmen Houses have recently taken part in multi-player strategy games to showcase House spirit and possibly to show freshmen what kind of merciless environment they’ll be living in for the next three years.

Adams, Lowell, and Quincy are all taking part in various versions of the game Assassins, where the general idea is that each participant is assigned a target within the same House and must kill that person in a highly specific way.

Lowell House's version of Assassins stipulates that only plastic spoons can be used as weapons. Despite the lack of threatening artillery, creator and operator of Lowell Assassins Alex L.G. Hugon '11 has seen his fair share of creative attack methods, including spoons sent via mail (which only succeed in killing the victims if the attacker is present while the package is opened) and objects like wiffle ball bats with multiple spoons attached to create a far-reaching lethal weapon.

Lowell Assassins specifically lists this year that nudity is no longer a form of protection. The rule was changed this year to discourage players from stripping down and streaking through campus in order to stay alive for another precious day.

Adams House Assassins is taking a slightly different route by incorporating alliances into its game, but otherwise tensions run just as high.

Quincy Assassins allows participants to choose the members of their teams, which means that if players are strategic they'll choose a team with people from their entryway and suites to avoid late-night kills when getting ready for bed. Quincy also has a particularly snazzy website that features the various teams and players and keeps participants updated on who is still active in the game. The Quincy participants are responsible for the high frequency of NERF guns currently on campus, and for the fear non-Quincyites feel upon finding themselves faced with NERF pistols after causally stepping within the Quincy gates where the game is contained.

Quincy Mole, based on the ABC series "The Mole," is a 12-person game in which competitors face each other in challenges while secretly being subverted by the "mole." The goal of the competition is to discover the identity of the "mole."

Kirkland is probably the most conspicuous of House games with its deadly ongoing match of Humans vs. Zombies, which is similar to Assassins except that it takes people longer to die because once killed they become zombies.

"It's more fun than the other games; once you die in Humans vs. Zombies you just join the other team. Once you turn into a zombie you have to kill someone every three days to stay alive, and if you die as a zombie then you're out of the game," said Kirkland House Committee co-chair and participant Kelsey A. Koff '12. "It may not be the most bonding experience for new freshmen; it's like the opposite of Secret Santa with all the secrecy and scheming. But it gets you involved."