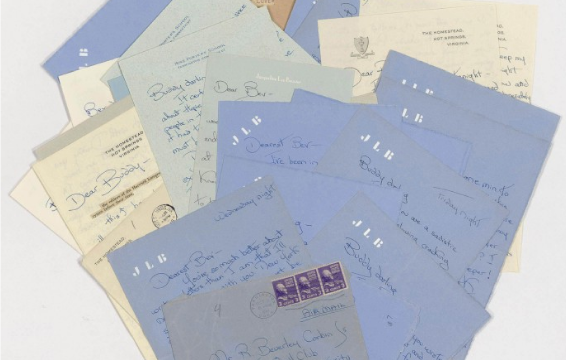 By Courtesy of Christie's

Love letters seem to be a thing of the past. But if you've always dreamed of possessing a few, especially from an iconic American figure, be sure to head to New York after finals with your checkbook in hand.

On May 19, Christie's, the world renowned auction house, is auctioning off 22 love letters from a young Jackie O to her Harvard beau, R. Beverley Corbin, Jr. '47. Also known as "Bev" and "Buddy Darling" in Jackie's letters, Corbin was a member of the Owl Club.

The letters, which are all handwritten in blue ink, are part of Christie's "Printed and Manuscript Americana" sale and are expected to fetch $25,000 to $35,000 at the auction.

Christie's has described the letters as "Love Letters from a Feisty, Teenage Jackie Bouvier to her Harvard Boyfriend."

The letters were written between 1945 and 1947 when Jackie was a teenager at Miss Porter's boarding school in Connecticut. They chronicle the long distance relationship between Jackie and her Harvard boyfriend and reveal a particularly witty side of her teenage years. Jackie, for instance, suggests in her letters that her beau should smuggle cigarettes, chocolate, and a hip flask to shock a certain "Mrs. J."

The letters also reveal some of Jackie's thoughts on the future.

"I'm never going to send my children to boarding school," Jackie wrote. "The boys can go to P.S. 148 with gangsters, and then go to Columbia & the girls can go to Hunter College and they'll all be morons but at least they wont have to tear around and get their teeth knocked out playing hockey every day ... Can you think of anything worse than living in a small town like this all your life and competing to see which housewife could bake the best cake?"

Tags
CelebritiesHarvard on the Web