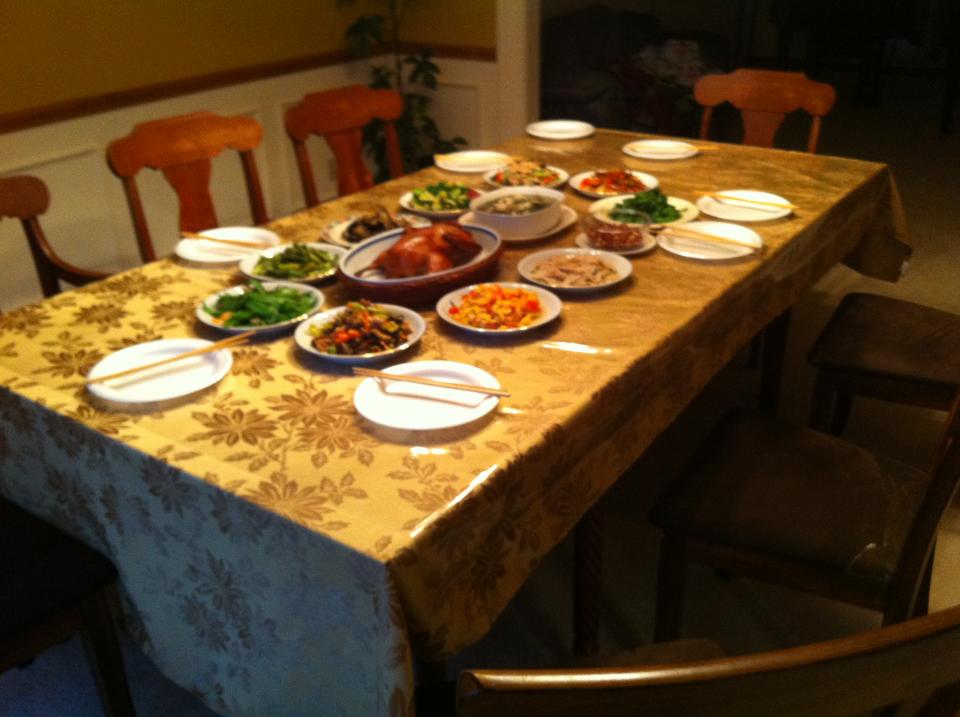 The traditional Thanksgiving feast is given some Asian flair, as the entire meal is to be eaten with chopsticks.

Even if Cousin Cindy forgets to bring her mothball collection and Uncle Earl remembers not to talk about Barack Obama's birth certificate, there will be awkward moments. String beans will burn, glasses will break, and insults will fly.

When the dinner table talk needs to be revitalized, use this Harvard-themed cheat sheet to get the conversation flowing without having to resort to Aunt Betsy's toilet humor.

The Lowdown: On Saturday, Harvard beat Yale 34-24 in the 129th annual game of the historic college rivalry.

Your ESPN-obsessed uncle: After an intense back and forth, running back Treavor S. Scales '13 rushed 63 yards to score with just over a minute to go, solidifying the Crimson's victory.

Your fashion-conscious cousin: A pair of Harvard students running a game-day apparel company created a small controversy when they marketed and sold a tank top featuring Nicki Minaj with the words "Yale You a Stupid Hoe."

Your Yale-alum father: Harvard has won 11 of the past 12 games. Don't get your hopes up anytime soon.

Your conspiracy-theory-loving aunt: The New York Times and the Huffington Post both show that Plymouth County, Massachusetts, still only has 99 percent of its votes reported. Where is that final one percent of votes? Is this another Florida, circa 2000?

The Lowdown: Last spring's Government 1310: "Introduction to Congress" class is at the center of an academic dishonesty investigation involving about 125 students, who could be forced to temporarily withdraw from school if they're found guilty.

What to say to…

Your cynical cousin: It's awfully ironic that a cheating scandal occurred in a class on Congress.

Your NCAA-obsessed uncle: Sports Illustrated reported that highly touted men's basketball captain Kyle D. Casey '13 withdrew from the College in September because he was involved in the scandal.

Your mother: I didn't cheat. I swear. I don't even take government classes. I'm studying Folklore and Mythology.

What to say to…

Your math-nerd uncle: Just weeks before he correctly predicted the outcomes of all 50 states in the presidential election, statistician Nate Silver took a break to chat politics and baseball with Harvard students at Kirkland House.

Your struggling actor nephew: Harvard students got to see Tommy Lee Jones '69 relaxing at a Harvard-Yale tailgate, according to reports on Twitter.

Your sister's Argentinian boyfriend: Harvard students questioned Argentine president Cristina Fernández de Kirchner about her wealth and her relationship with the press when she spoke at the Institute of Politics in September.