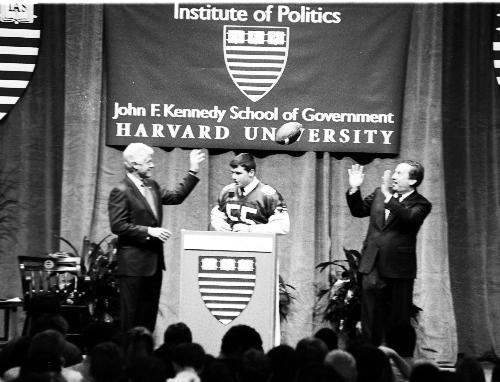 Former U.S. President Bill Clinton called for greater awareness of the possibilities and dangers of the interdependence of the modern world in a speech at Harvard yesterday.

“You live in an age of interdependence,” Clinton said to a crowd of over 6,000 packed into the Albert H. Gordon indoor track and tennis facility. “Openness brings greater opportunities, and greater vulnerabilities.”

The former president focused most of his speech on the aftermath of the Sept. 11 attacks, recognizing the unprecedented damage the terrorist actions inflicted on the country.

“We are engaged literally in a struggle for the soul of this new century,” Clinton said.

University President Lawrence H. Summers, who served as Clinton’s secretary of the treasury, introduced his former boss, praising his leadership skills and depth of knowledge—as well as his ability to draw a crowd.

Once available seats were filled, many students were forced to sit on the floor, or stand behind the last row of bleachers, with Clinton only visible via two large-screen projections.

“Usually, to get a crowd this large at Harvard, we have to give away diplomas,” Summers quipped. “Today, it is only your presence.”

In his speech, Clinton said that despite the damage done, in the end terrorism would be defeated.

“Terrorism has a very long history,” Clinton said. “But in spite of this long history, no terrorist campaign has ever succeeded.”

The former president cited many instances where the government has been able to prevent acts of terror, saying everyone should feel confident that the country is well protected.

“As chilling as what happened on Sept. 11th and the current anthrax scare is, good people have been working on this for a long time, they are getting better, and will continue to get better,” Clinton said.

In order to limit future threats, Clinton called on the U.S. government to make improvements such as strengthening the capacity to track the funds of terrorist networks through improving the government’s “woefully inadequate computer tracking technologies.”

But Clinton said the battle against terrorism comes down to problems between how different communities interact.

“The central irony of our time is that with all of our progress, we are still bedeviled by fear, hatred and demonization,” Clinton said.

He said it is the role of the U.S. to ensure that more countries benefit from an open and interdependent world. Clinton said America must work to spread democracy, broaden economic benefits, reduce global poverty and generally maintain a higher level of consciousness of the problems and concerns of others, especially in Muslim countries.

“We have to have a special care for the problems of the Muslim world,” Clinton said. “We have to help people help themselves.”

But Clinton said with a more open global society, there are greater threats, some of which may not be overcome simply through greater understanding.

“We live in a world without walls,” Clinton said. “We will have to defeat those who want to tear it down.”

Clinton was often animated during his speech, reeling off statistics and facts in rapid succession, while using trademark hand gestures to emphasize points.

But the speech was not all serious—after Clinton spoke, Summers introduced Harvard football team captain Ryan M. Fitzgerald ’02, who presented Clinton with a football from Saturday’s victory over Yale in The Game, as well as a Harvard football jersey with Clinton’s name.

Clinton playfully tossed the ball to Summers, who bobbled and dropped it, before picking it up and tossing it back to Clinton.

Clinton also took a dig at President George W. Bush’s recent tax cut, joking that the Clinton administration should have protected money in the same way Harvard does.

“If we had called it an endowment, that tax cut never would have passed, and we’d be on our way to a debt-free America,” Clinton said, drawing cheers from the crowd.

After the speech, Clinton headed to the Institute of Politics ARCO Forum, where he participated in an hour-long question-and-answer session, covering topics ranging from the Middle East peace process, restrictions on civil liberties and education funding in developing countries.

Clinton went on to dine with President Summers.

—Staff writer Lauren R. Dorgan contributed to the reporting of this article.