The Racial Theory of Grade Inflation 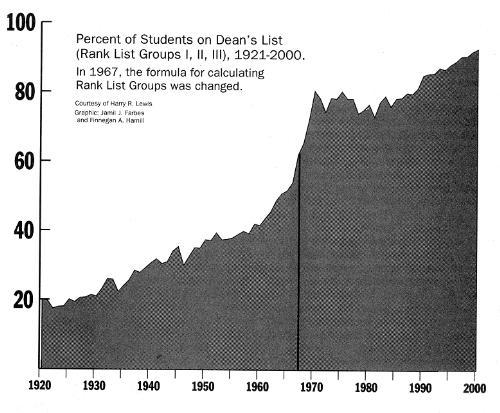 Kenan Professor of Government Harvey C. Mansfield, Jr. ’53 has attracted a lot of attention this year for his campaign against the “evil,” as he puts it, of grade inflation. The publicity has been spurred in large measure by his theory of why grades have gone up. According to a view stated by Mansfield—most recently in an April 6 article in the Chronicle of Higher Education—there was once a Garden of Eden at Harvard in which professors gave students the grades they deserved. “Everyone knows that C is an average grade,” he says. At some point we stopped evaluating students properly. “When grade inflation got started, in the late ’60s and early ’70s, white professors, imbibing the spirit of affirmative action, stopped giving low or average grades to black students and, to justify or conceal it, stopped giving those grades to white students as well.”

I have called this theory “groundless and false,” and this denial, by a member of the Harvard administration, was taken as a smoking gun that the theory must be true. The thesis was reaffirmed, again without evidence, but with a mention of my failure to provide evidence to refute it—as though there was some epistemological principle that a theory, once posited without foundation, remains true until someone goes to the trouble to produce data to falsify it.

In fact, this theory is wrong not just about the cause of inflation, but even about the timing. Grades have gone up at Harvard. But they have been going up as far back as I have been able to get grading data, all the way back to the 1920s. The accompanying chart shows the percentage of the class in “Dean’s List”—Groups I, II and III together, a reasonable measure of overall grading standards. Most of these data are taken from the annual reports of the president and the deans, and are on the public record.

Three important observations about the figures that lie behind the charts. First, the data up until 1966 are not strictly comparable to the data from 1967 on, because different formulas were used for determining Rank List Groups before and after this gap. Prior to 1967, numbers of A’s, B’s, etc., were counted; from 1967 on, letter grades were converted to numbers and averaged.

Second, prior to 1973, the data are for men only; from 1973 on, they are for both men and women. Because the presidents’ reports for a few years starting in 1973 list the percentages in the various Rank List Groups separately for men and women, I computed weighted averages based on enrollment numbers to determine the overall Rank List Group percentages.

And third, 1970 was a unique year in Harvard grading history, because students were given the option of not taking final exams and having courses graded pass-fail. One would expect that a one-year change in grading policy would cause an upward blip in cumulative grade point averages for four years.

Certainly the curve has a steep slope from 1960 to 1970, even taking the 1966-1967 discontinuity into account. But black students did not appear in significant numbers on the Harvard campus until 1970, and the period from 1970 through 1985 was the only 15-year period in the past 80 years in which there was no increase in grades at Harvard.

The racial theory of grade inflation is said to have been inspired by anecdotes heard at the time about lenient grading of black students. Gossip, doubtless selectively stated and selectively heard, is a dangerous basis for a social theory, as is a single person’s practice or experience. In fact, the racial theory of grade inflation is so spectacularly wrong that it is hard to know how or why it got started.

The Rank List data are tempting, and should not be overinterpreted. Most of the bumps in the chart are probably just noise. Still, I will risk making a few observations.

First, the data seem not to suggest that C was ever an average grade at Harvard. Estimating the average Harvard grade from the percentage of the class in the various Rank List Groups, at the Harvard Mansfield attended in the early 1950s, the average grade was probably above B-. For C to have been the average grade during his undergraduate years, Mansfield’s Harvard would have to have been not just a Garden of Eden, but a Lake Wobegon, where almost everyone was above average.

Second, the spike in the curve at 1970 is clearly noticeable; as already noted, there may be effects due to the uniqueness of 1970, as well as other aspects of campus atmosphere associated with the Vietnam War. But there is a similar spike at 1945—lower, but on a lower base. I have no idea if these local wartime spikes, or the small Depression-era spike at 1932-33, have any common explanation.

Third, there may be a minor, artificial inflationary bump in 1973, when women’s grades were first included in the averages, since in those days women’s GPAs were appreciably higher than men’s. If so, that effect has long since disappeared.

Many explanations can be offered for the increase in Harvard grades, whether it represents mere “inflation” or the result of grading more talented students on a fixed standard, whether professors are more lenient, compassionate, cowed or indulgent than they used to be, whether higher grades are associated with smaller courses, with fewer students failing to finish Harvard at all, etc. And of course views can differ over whether we, as faculty, have an obligation to grade on a fixed curve, i.e., to cap the number of high grades in our courses, independent of who happens to be taking our courses, or indeed who has been admitted to attend Harvard in a given year. So too, we can debate whether there is cause for alarm in today’s grading pattern, whatever the cause; it’s certainly true that the present rate of increase can’t go on forever.

But any credible explanation, or criticism, of the pattern of rising grades at Harvard must take into account at least the basic realities. The increase in grades did not start in the late 1960s; the graph shows that it was already happening in the 1920s. Indeed, grade inflation was a worry even the 19th century: a special 1894 “Committee on Raising the Standard” rued that “in the present practice Grades A and B are sometimes given too readily,—Grade A for work of not very high merit, and Grade B for work not far above mediocrity.”

If decade-scale bumps and troughs are averaged out, grades increased at a remarkably constant rate through most of the twentieth century. If there is evil here, then there has been evil for a long time. If ethnicity, psychology, guilt, affirmative action, the idealization of self-esteem or faculty spinelessness is supposed to explain late 20th-century increases in grades, then the same theory needs to be tested against the full, continuous course of increase in grades at Harvard.