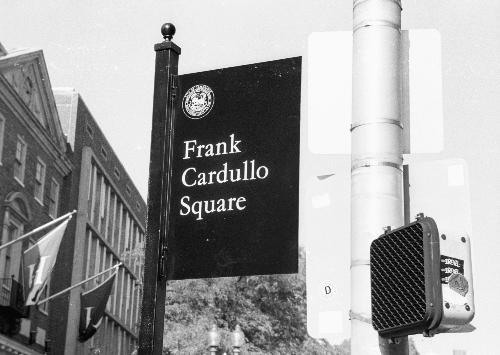 Last spring, Dennis Coveney noticed a sign was missing from the corner of JFK Street and Brattle Street.

“It really bothered me,” says Coveney, who has worked in the Square for 33 years and currently does cleaning and maintenance work for the Harvard Square Business Association.

He called the Cambridge Department of Public Works, which told him that the problem was being taken care of.

And this week a crisp new black-and-white sign appeared, restoring to the corner its rightful title: Frank Cardullo Square.

The sign is one of the first street corners to use a slick new design created for the city specially by a graphic designer, says public works commissioner Lisa Peterson.

The upgrade comes just in time for the Square’s celebration this weekend of Oktoberfest, a tradition that Frank Cardullo started.

With the flashy new addition, Harvard Square might look as if it’s been newly rechristened. But the corner was originally dedicated seven years ago to a man whose personality defined it for half a century.

Frank N. Cardullo came to the Square in 1945 when he bought the Wursthaus restaurant, which he ran as a crusty neighborhood institution until 1993. The site is now home to Abercrombie & Fitch.

In 1950 he opened Cardullo’s, a gourmet food store across the street from the Wursthaus.

Cardullo was “a legend in Harvard Square,” says Paul Macdonald, owner of the Leavitt and Pierce tobacco store on Mass. Ave., where Cardullo was a frequent customer.

“You could call him the unofficial mayor of Cambridge,” he says. “He was a pipe smoker, and he used to send the police into the store for his tobacco. He had that kind of a personality.”

Cardullo died in October 1997, just a year after the corner was officially dedicated in a ceremony that brought out many Cambridge dignitaries.

“The city council chose to honor him because he’d given an awful lot to the city over the years,” says Frank R. Cardullo, son of Frank N. and the current owner of Cardullo’s.

Frank R. says he appreciates the newly restored tribute to the man who made that corner of Harvard Square “his kingdom.”

“I’m glad it’s up,” he says. “It’s due recognition of my dad. The sign is clean and neat, and it’s a fitting memorial.”