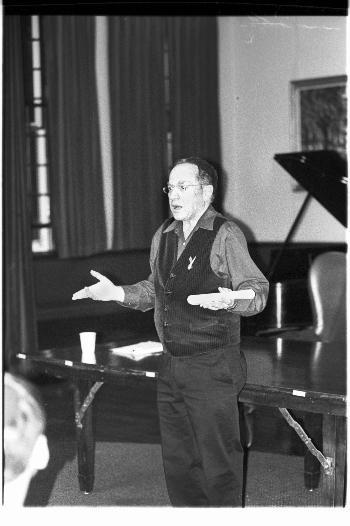 Frankfurter Professor of Law Alan M. Dershowitz is known for holding feisty debates on hot-button issues. Last night his only opponent was an empty chair, but he still managed to spark fireworks.

Standing beside a chair with a copy of the petition taped to it, he said students and professors who had signed the petition were anti-semitic and knew “basically nothing about the Middle East.”

“Your House master is a bigot and you ought to know that,” he told the crowd of about 200 students. “Everyone else who signed that petition is also a bigot.”

Hanson’s knowledge of the Middle East “ends with the death of Moses,” Dershowitz said.

Several students in Winthrop, who did not attend the debate, said they were offended to learn how Dershowitz had referred to their House master.

“It’s an offensive thing for a professor to say about a House master for a large number of Harvard students,” said Sarah T. Tsang ’03.

Dershowitz criticized those who signed the petition, saying it was “the most unacademic thing to do.”

The petition, which calls for Harvard and MIT to divest from Israel and from American companies that sell arms to Israel, also calls for the U.S. government to stop supplying weapons until four specific conditions are met by the Israeli government.

Dershowitz reviewed the four conditions demanded by the petition and argued Israel was already in compliance.

“It’s a little bit strange that there should be such a huge debate about four issues which have already been resolved,” he said.

He said he personally supports a Palestinian state but argued that, compared to other groups seeking statehood, Palestinians hold a lower “moral priority” because they rejected a U.N. proposal for dividing the Middle East after the Second World War that included the creation of a Palestinian state. Dershowitz also said Israel should not be singled out as a violator of human rights. He said Israel stands among the top ten most rights-conscious nations in the world.

“By any criteria, Israel’s record on human rights is better than any country in the Middle East,” he said.

He cited examples of human rights violations in countries that the U.S. supports, such as the execution of homosexuals in Egypt and the repression of women in Saudi Arabia.

Dershowitz said he distinguishes between criticizing the Israeli government and signing the divestment petition. He said criticism of the government, which he said he participates in, is not inherently anti-semitic, while signing the petition is.

He also threatened to sue any professor who votes against the tenure of another based on the candidate’s ties to Israel, calling them “ignoramuses with Ph.D.’s.”

Many members of the audience, which generally supported Dershowitz and applauded for him several times, said they appreciated the presentation.

“I thought it was great,” said Rachel S. Weinerman ’03, a student in Dunster House. “This type of honest sentiment about the divestment petition has long been warranted.”