Harvard in a Beer-Ad World 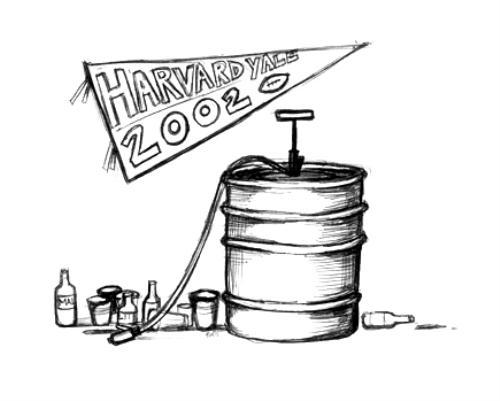 It’s been a busy fall. The dean of the Faculty has announced that the entire undergraduate curriculum—Core, concentrations, the whole shebang—will be reviewed. A system is being developed for course preregistration, breaking an old Harvard tradition in the way students select courses but promising better advising and better-trained teaching fellows. Advocates of Israel and the Palestinians have thrown some blistering words at each other at Harvard events, and the president of Harvard has set off a debate on an important question of intents and actions. The President of the U.S. has threatened war in Iraq. The North Koreans have announced that they were just kidding about not wanting an atom bomb. Midterm elections tomorrow will decide control of both houses of Congress and the Massachusetts governorship too. Almost every Harvard athletic team is having a good season, and the Crimson Dance Team has been invited to perform at halftime in the Sugar Bowl.

And what are students talking about? Well, some at least are very concerned about whether they will be able to drink beer from cups filled from a keg at the Yale football game, or will have to drink from bottles or cans instead. The issue has been presented by some as between healthy, happy fun and the crushing of the last vestige of social life at Harvard by the jackbooted heel of the College administration. A petition, more calmly worded than some of the e-mails I have received, argues for kegs on economic, medical, sociological and even environmental grounds.

It’s been suggested to me that students must not have enough real problems if this is the subject that has stimulated activity. The World Series was played somewhere near Hawaii, and no Harvard official has referred to the dorms and the Houses as “love nests.” Perhaps students are simply finding a way to play their collegiate roles, knowing the deans will play theirs.

But I think that reading would be too dismissive. Something real is going on here, but it’s beneath the surface. Students who are passionate on this subject, doubtless skilled in writing Social Analysis and Moral Reasoning papers, haven’t come to grips with why they care so much about beer vessels.

The keg ban was decided after problems at the last Yale game here when undergraduates were allowed to have keg parties at the Business School parking lot. There were several alcohol-induced medical emergencies, including four cases of alcohol poisoning at the “life threatening” level. A state police report after the Yale game reported that one student fell from the roof of a truck and had to be hospitalized—for minor injuries, as it turned out; he could easily have become a quadriplegic. Police assigned to the event described it as “chaos” due to the unlimited access to the numerous kegs present, in spite of assurances from students beforehand that parties would be kept under control.

The ban was discussed with the masters two years ago, and again more recently; it was also discussed with the Athletic Committee. No one brought forward a rational argument against it in any of these settings. In pursuit of a less dangerous Yale game this year, other changes have also been made. For example, the parties have been moved from the Business School parking lot to Cumnock Field, so that inebriated students walking to The Game won’t be killed by the traffic on North Harvard Street as almost happened several times two years ago.

No one thinks that banning kegs will end drunkenness at the Yale game. But using that as an argument against the keg ban is like arguing that a 70 mph speed limit is pointless because fatal accidents happen at 50 mph too. Kegs are meant to be emptied; I doubt many half-full kegs get returned to the liquor stores after football weekends. It is easier to lose track of how much you have drunk if you are drinking from a keg. And the higher cost of canned beer than kegs, which has been used as an argument against a keg ban, is actually an argument in favor. If having to pay a little more would really make students slow down a bit, that would be good, not bad.

It is natural for individuals to favor fewer restrictions over more; we defend our own freedom of action and accept rules most readily when we bear the responsibility for others’ abuse of rules. But some of the scenarios about consequences of the keg ban seem improbable. There is no reason to think that students faced with cans and hard liquor will favor the hard stuff while the same students faced with kegs and hard liquor would go for the beer. Of course, anyone bent on getting drunk, even if only to prove a point, will be able to do so whatever the regulations; but the point of drinking is not to get drunk. Nor do I think that the keg ban will force parties off campus where the drinking will only be less controlled. In fact, I am puzzled about how to square this argument with the argument, made with equal force, that Harvard students are responsible drinkers. And finally, I am skeptical that any part of the push for kegs stems from a greening of the Harvard student body, suddenly passionate about litter in Allston.

No regulation banning beer or anything else has been announced, only the particular containers in which beer is often delivered to college students. No limits have been set on the number of cans or bottles that can be brought onto Soldiers Field. We’ve just said no kegs and have expected students, as we always have, to drink legally and responsibly if they drink at all.

I think that the concern about kegs is actually an unhealthy expression of something good about Harvard. Our students are the best in the country, the most academically gifted and the most artistically talented. They are the best musicians, and they put out the best student newspaper (truly!). They study with Nobel Prize winners and they become Rhodes scholars. We are proud of Harvard, and we are so aware of the privileged positions we occupy that we even know that it is unseemly to make jokes about Yale the way the Elis make jokes about us.

Yet as much as Harvard students are proud to be at the best college, they also desperately want a “real college” experience. They come from all over America, and beyond; they feel isolated because their old friends think they have gone to a movieland Harvard where everyone wears glasses and has a microscope in one hand and a poetry book in the other. Part of the attraction of the real Harvard to many students is that so many things flourish here that also exist at “real colleges,” such as a football team and a Reserve Officers Training Corps unit. Even as Harvard students love their Houses, they want keg parties too, like the ones at the colleges where their friends are, or the ones they see in movies. Harvard students want everything that other college students have on top of what Harvard has that most other colleges don’t.

But the beer advertisements are a fantasy. The reality of heavy drinking, at the level that happens every weekend at Harvard, of draining the keg dry, is something else. It is 19-year-olds in the prime of life intubated in an emergency room somewhere because their autonomic nervous system has shut down and they can’t breathe. It is broken bones and internal bleeding from accidents with automobiles. It is promising young people in an instant having their lives changed forever as they commit or become victims of crimes that would not have happened if they had been sober. The beer-ad world is one designed by corporations to sell beer, not to be sure you have fun. The real world of drunkenness is no fun at all.

No one in the College is against fun, and while we expect students to obey the laws, we aren’t against drinking within the law. But we also expect students not to fall prey to roles cast for them by the TV and advertising world.

See you at The Game. Let’s all get together and have a good time, whether you’re drinking soda or something stronger. The important part of a party is the people. If you’re drinking responsibly, I’ll even join you in raising my beer can in a toast to Harvard. And then let’s all wake up the next morning safe and healthy.