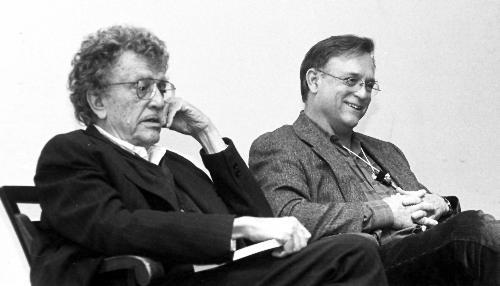 Author KURT VONNEGUT, left, and his son, MARK, speak of their family’s struggle with Mark’s mental illness before a packed crowd in the Sackler Museum yesterday.
By Maria S. Pedroza

Author Kurt Vonnegut and his son, Mark, recounted last night the turmoil that unfolded in their family after Mark began to suffer from mental illness in 1969.

“Not only did we see you crack when you went crazy, we saw something beautiful when you got well,” said Kurt Vonnegut. “The recovery was worth it.”

Before a packed crowd in the Sackler Museum, the pair addressed the difficulties that any family faces when one of its members develops a mental disorder.

“I wrote the book when I doubted I would get well,” said Mark Vonnegut.

He said that his mental illness was originally misdiagnosed as paranoid schizophrenia, but was really a combination of bipolar disorder with elements of schizophrenia.

Publishing an account of mental illness in such a frank manner was extraordinary for its time.

“People don’t talk about mental illness for many reasons—one is that it makes their children less marriage-able,” said Kurt Vonnegut.

He then added that his own mother warned him against marrying a woman—his future wife—whose family had a history of mental illness. While his wife never experienced mental illness, his mother committed suicide.

The father-son duo frequently switched between a question-and-answer forum and a chat. The conservation often jumped from topic to topic.

“Are there any wonderful new pills for crazy people?” asked Kurt Vonnegut.

Mark Vonnegut, who is now a Milton, Mass.-based primary care physician and graduated from Harvard Medical School in 1979, answered that people were more medicated today but were not being cured.

He added that fewer side effects of new drugs lead to more frequent prescription.

“Drugs will get rid of the voices in people’s heads, but you have to leave them at least a little bit of their zip,” said Mark Vonnegut.

When Kurt Vonnegut asked his son for his thoughts on psychotherapy, Mark Vonnegut responded that it gave false hope to anyone who was not biochemically balanced.

The discussion relied on audience input, which ranged from questions about Mark Vonnegut’s Harvard days to audience members’ personal stories about mental illness.

Mark Vonnegut said, after his experiences with mental illness, he most values going into work everyday and saying “How may I help you?.”

—Staff writer Maria S. Pedroza can be reached at mpedroza@fas.harvard.edu.

An earlier version of the caption of the photo accompanying this article as well as a statement in the story incorrectly stated that author Kurt Vonnegut won the Pulitzer Prize.