Paying the Piper for the Pipe 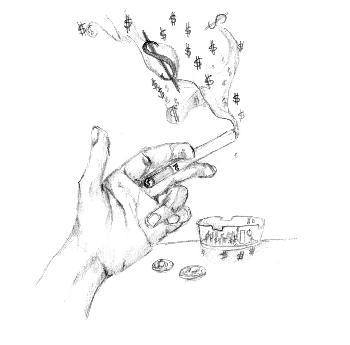 The city of Boston recently decided to ban smoking entirely in all restaurants and bars, and it might soon follow the lead of New York City by imposing a drastic tax increase on cigarettes as one of many steps designed to reduce smoking.

There are two arguments for this kind of “sin tax”—a tax designed by the government not as the most efficient way to raise revenue but as a means to steer peoples’ behavior away from a practice of which it does not approve. The first argument is that such a tax protects people from their own bad choices. This argument, however, is far less persuasive than the point that such a tax accounts for the actual cost of smoking to society. Nevertheless, the economic effects of smoking are difficult to measure, making a sin tax difficult to implement fairly.

The first argument used to justify a cigarette tax—that the government should protect people from their bad choices because of its compelling interest in the health of its citizenry—is unpersuasive. It is incredibly paternalistic and condescending toward the tens of millions of Americans who make the conscious decision to start smoking, knowing the harmful health effects associated with it. The logic of the argument is that smokers’ loss of liberty is less important than the government’s compelling interest in smoker’s health, and the underlying assumption is that the government knows what is better for people than people themselves do.

A clever, similar, but currently unfulfilling argument used to justify high taxes on cigarettes is that smokers will have greater incentive to quit if their habit costs them more money, and since they’ll be better off cigarette-free in the long run, a tax discouraging smoking actually makes smokers happier. This argument also relies on the government-knows-best assumption, along with the idea that since smoking is addictive and people get hooked when they are young, they never make a conscious rational decision to smoke. While some individuals might be happier as tax-induced former smokers, second-order effects simply should not be used to justify public policy unless supported by very strong evidence. The entire web of logic underpinning the tax increase unfolds easily if the tenuous assumptions behind it prove untrue. Do all smokers secretly want to quit? Did all or most never rationally decide to start in the first place? Do the gains to the people who quit and are happier outweigh the costs imposed on all the people (many poor to begin with) who can’t kick the habit but now have to devote more of their incomes to cigarettes?

While there are negative health consequences imposed on non-smokers by second-hand smoke, taxing cigarettes so that smokers are punished for smoking even in the privacy of their own home is not a focused solution. Instead, banning smoking in public places more narrowly eliminates second-hand smoke problems without unduly restricting personal freedom.

The reasonable argument made to justify high cigarette taxes is that the negative health repercussions of smoking, even if they were suffered entirely by the smoker, such as increased rates of lung cancer, emphysema, and heart disease, are often borne by society as publicly funded medical costs. This is an example of what economists call a negative consumption externality; the smoker doesn’t pay the entire cost of his habit because he might not cover his increased medical expenses through higher private insurance premiums. The classic solution to this negative externality is to impose a tax that erases the difference between the private cost to the smoker and the social cost to society of his smoking; a tax like this is said to “internalize the externality.”

Unfortunately, it is doubtful that governments could accurately measure the magnitude of the tax necessary for smokers to exactly internalize the excess social cost of their habit. The debate within the economics profession on smoking’s health externality is far from settled. Besides, even if governments could accurately calculate the cost of the externality, they would almost certainly decide to increase the magnitude of the tax hike to deter smoking through punishing smokers rather than relating the tax’s magnitude to the externality cost. New York City’s decision to raise taxes by almost $1.50 (along with a nearly commensurate increase in state taxes) was not based off economic analysis of smoking’s negative effect on the city’s coffers, but on government moralizing.

While the economic argument for taxing cigarettes is cogent in theory, despite its practical difficulties, it still raises questions about broader public policy. For if the government has a compelling interest in restricting smoking, why not drinking? After all, there are immense economic costs to society when productive people are killed by drunk drivers. Why should smokers be the sole sinners to pay up when there are so many compelling social engineering goals for the government to reach and so many different groups of wayward citizens to target?

Smoking is an unhealthy habit, and it is certainly in the interest of the government to make people aware of its long-term consequences. However, the paternalistic attitude implicit in the cigarette tax ought to make governments wary of imposing drastic increases in cigarette taxes, or any sin tax for that matter. In the event more local governments, including Boston’s, decide to raise cigarette taxes, they should guide their decision not by attempting to punish smokers, but by reasonable estimates of what will internalize the negative consumption externality of smoking.