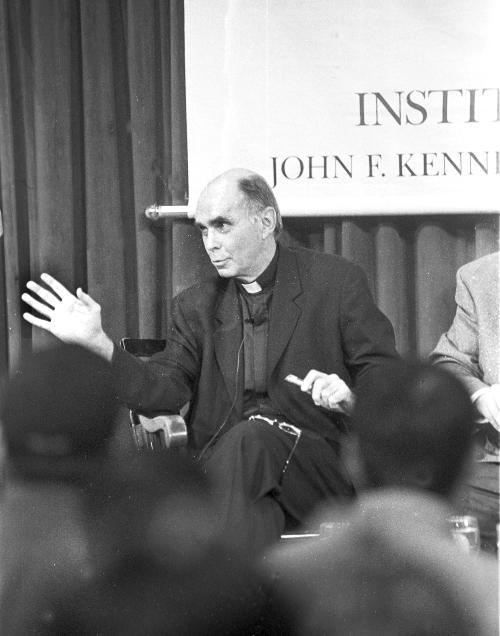 Hitchens, introduced by Institute of Politics Director Daniel R. Glickman as a “renowned contrarian,” suggested that U.S. military intervention was a moral necessity in a discussion initiated to answer the question, “Would War Be Just?”

“If you don’t act prudently now, you will have to act—not prudently or imprudently, but simply act—for your own self-preservation,” Hitchens said.

Maintaining an opposing viewpoint, Hehir invoked the “just war theory,” first suggested by St. Augustine, to contend that war with Iraq would be immoral.

“War is moral only when it is absolutely necessary,” said Hehir, who currently serves as the president and CEO of Catholic Charities USA. “I think the case has not yet been made for necessity.”

Hitchens requested that the discussion begin with an audience vote. The majority of the 500 audience members present voted that war would not be just; equal minorities favored intervention or were undecided.

“You’ve got your work cut out for you,” Glickman joked to Hitchens.

He repeated the audience poll when the discussion ended. A few audience members indicated that they had changed their opinions, but results remained essentially the same.

The stances Hitchens and Hehir held last night are not ones they have consistently adopted. Hehir endorsed the Gulf War while Hitchens opposed it. Hehir also supported intervention in Afghanistan earlier this year.

Hehir nonetheless maintained that the United States should consider war only as a final resort.

“Great power in the world is as much about restraint as it is about coercion,” he said.

“We can be seduced by arguments that war is easy, that war is a unique catalyst of change,” he said.

Hehir reiterated that he has not seen compelling evidence for Iraqi intervention.

“It seems to me as complete a case as any case could be,” he said.

“Picture, if you will, what Mr. Hussein could do with a weapon of thermonuclear capacity,” he told the audience, suggesting that a fully armed Iraq might resemble North Korea today.

Hitchens also said that the United States must work against reputations of complicity with the Iraqi government in the past.

“We have acquired a responsibility to the peoples of Iraq,” he said. “We have to show that was not what we wanted.”

Hitchens’ work as a journalist for such publications as Vanity Fair and The Nation brought him into contact with several Iraqi residents. He has not met anyone, he said, who does not wish that the United States would “put an end to Saddam Hussein’s regime in Iraq.”

Hehir acknowledged that with increasing precision and conscientiousness in U.S. military operations, attacks probably would not endanger civilians’ safety.

Yet an attack on Iraq, he said, would assault the lifestyles of an already-strained population.

Hehir also said that the United States must realize that a war could produce considerable American casualties.

Hitchens argued that civilians would be in greater danger than soldiers under the threat of mass-destruction weapons.

“Everyone sitting in this room is already wearing a uniform, whether or not you realize it,” he told the audience. “Living as I do on the top of a tall building in Washington, I consider myself to be in the front line.”

The anti-war sentiment among audience members was evident throughout the evening. Buttenwieser University Professor Stanley H. Hoffman joked with Hitchens when he stepped to the microphone to pose a series of questions.

“How does it feel to be in the same camp as Heinrich Kissinger?” he said.