Macho star forced to show sensitive side in Theatricals’ skits 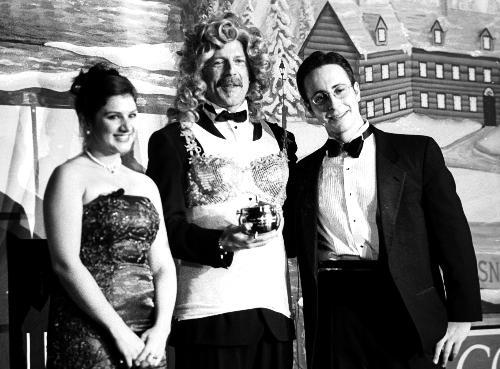 Bruce Willis entered as a tough guy. But by end of the night he was sporting a gold-sequined bra and a blond wig.

As part of its annual tradition of honoring noted celebrities, the Hasty Pudding Theatricals awarded Bruce Willis their brass pudding pot in last night’s Man of the Year ceremony.

The night was filled with jokes about Willis’ tough guy image—and attempts to soften it.

Theatricals’ co-producers Lena Demashkieh ’03 and Joshua N. Bress ’03, who served as hosts of the event, poked fun at the star of Die Hard fame throughout the roast for his frequent stints as the “bad boy” in his movies.

Bress kicked off the roast as he was lowered onto the stage in a harness, carrying a camouflage-colored machine gun to the tune of “Bad Boys.”

Before they would formally start the roast, however, the Pudding co-hosts requested that a Pudding cast member dressed in drag as a nurse frisk Willis for any weapons.

Willis, dressed in a traditional tuxedo and sporting a clean-shaven head and moustache, was consumed by laughter on the stage as he spread his arms and legs for the cross-dressed nurse.

Asked to talk to a doll—a play on Willis’ role as the voice of Mikey from Look Who’s Talking—Willis jokingly looked under the skirt of the doll and tossed it offstage.

But the Pudding hosts were still not convinced that Willis had revealed his sensitive side.

“That was great, but I still feel you’re clinging to that ‘bad boy’ image,” Demashkieh said.

“Yes, I am,” Willis quipped with a smile.

To get rid of this “bad boy” image, the hosts next made Willis don a baby blue headband and wristband to do step aerobics.

Willis pretended to be winded and checked his pulse as he stepped in slow-motion to the 1980s hit song “Let’s Get Physical.”

The veteran action star was allowed to show his macho side in his next test—recreating the Die Hard scene in which his character, John McLean, walks on glass while dodging bullets.

Willis jerked from side to side and jumped up and down to his “Bad Boys” anthem as he navigated his way across the crackling bubble wrap that substituted for glass.

Finally, despite his dramatic performance, Demashkieh and Bress asked Willis to exorcise the ghosts they said were haunting the old Pudding building—mocking his role in The Sixth Sense.

To get rid of the demons, Willis played the harmonica to the jazz beat of the Theatricals’ band as the audience clapped with the rhythm.

While Willis good-naturedly joked with the hosts throughout the show, he said he was truly honored by the award.

Willis said it was refreshing to be a part of an awards show that was “not about politics or selling something.”

“There are a lot of other awards...I have yet to win,” Willis said. “Any time I can get up here with my peers, in a gold bra and blonde wig...it’s exciting.”

Despite all the jokes at his expense, Willis said he enjoyed his time on stage—especially since he is not usually subjected to insults as a movie star.

“There are few things I enjoy more than being made fun of,” he said.

After the awards ceremony, Willis attended the premiere of the Theatrical’s 154th production Snow Place Like Home.