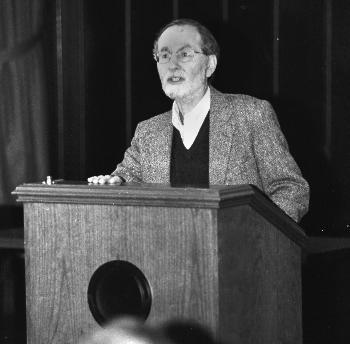 Palestinians should offer non-violent resistance to stop the expansion of Jewish settlements into Palestinian land, said the leader of a national human rights organization at a Harvard Divinity School (HDS) forum yesterday.

Edmund Hanauer, executive director of the Search for Justice and Equality in Palestine/Israel, also said U.S. foreign policy must change before tensions between Israel and Palestinians can be resolved.

“We are trying to inform people of the responsibility of the U.S. government for the massive human rights violations perpetrated by Israel against Palestine,” said Hanauer, who has been an active proponent of Palestinian human rights.

He spoke of the $3 billion that the U.S. gives to Israel each year as an example of American support that helps establish Jewish settlements on lands mainly occupied by Palestinians.

Hanauer criticized Israelis’ treatment of Palestinians in the West Bank, the Gaza Strip and East Jerusalem, likening it to Europeans’ relocating Native Americans onto reservations. But he said that both groups must work together to achieve peace in the Middle East.

“Justice for Palestinians and security for Israeli Jews are interdependent and not mutually exclusive,” Hanauer said.

A viewing of a short documentary film on the Abu Ghneim Mountain Israeli Settlement Project opened the event. Hanauer later referred to the project as an example of Israeli expansion into Palestinian lands. It was followed by introductory remarks by Hanauer and Jeremy C. Bird, a second-year HDS student who has been working with Hanauer for the past year.

Bird said a “cycle of violence” has contributed to the tensions between Palestinians and Israelis. Rather than using violence themselves, both sides must peacefully campaign for justice, he added.

HDS’ Shura Islamic Forum and Jewish Students’ Association said they sponsored the panel to promote interfaith discussion, though the groups said they do not necessarily support the views of the Search for Justice and Equality in Palestine/Israel group.