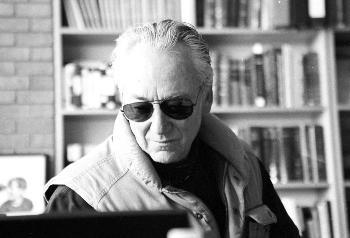 Weld Professor of law CHARLES R. NESSON in his office in Griswold Hall getting ready for a busy day of classes. Nesson has recently been embroiled in controversy over his drug habits.
By Joseph P. Flood, Crimson Staff Writer

It is 6:30 in the morning as Weld professor of Law Charles R. Nesson ’60 takes a set of keys out of his pocket to unlock the gates to the Mount Auburn Cemetery. The key to the gate, he says, was given to him by the cemetery so that he could enjoy his morning walk before the cemetery opens to the public.

“I believe Mt. Auburn was an initiator of the garden cemetery movement. Before that, the places where they kept the dead were horrible. Catacombs, the things of kid’s nightmares,” he says. “I’m going to be buried here.”

“This place is an arboretum, a bird sanctuary,” he continues. “I get up to honor the sun, to feel at one. I feel at one with anyone who feels blessed by the morning.”

The solitary morning walks, like so many things Nesson does, have a certain air of eccentricity, and even cause the occasional controversy. When he told the Harvard Law Record in February he smoked marijuana regularly during these strolls before class, it made national news.

His irreverent style draws both admiration and ire—he has dabbled on the wrong side of the law, he has helped make ground breaking civil rights changes and he has offered to defend a students’ use of racial epithets. Among the Harvard Law School faculty, his antics have earned him a reputation as a hilarious, but sometimes frustrating colleague.

Nesson reaches the top of a large hill in the middle of the cemetery and looks out at the Charles River, flanked on either side by Boston and Harvard.

“My dad’s office was over by the Prudential,” he says pointing at Boston’s second tallest building. “He went to the law school to get out from his father ‘s control,” Nesson says, staring at the city.

“He was 19 and you needed to be 21 to take the bar exam. When he finally took it he knew he needed help with the test. He was caught with five other guys getting the answers to it. He was disbarred before he ever practiced,” Nesson says with a smile and a shake of his head.

His father then went to work at Nesson’s grandfather’s real estate firm.

“He did a good job, until my grandfather died. I don’t know, after that he changed, started liquidating the property and he spent all the money.”

Nesson hums as he begins walking again, down a steep hill.

From Student to Professor

When he was a student at Harvard Law School (HLS), his professors used to joke that only he and God were smart enough to understand his papers.

A math major as an undergraduate, he entered HLS and maintained the best grades in the class for all three years.

After graduating from HLS he clerked for Supreme Court Justice John Marshall Harlan, then went to Alabama to work as a special assistant in the Department of Justice’s Civil Rights Division.

In 1971 he represented Daniel Ellsberg ’52 in the Pentagon Papers case, with attorney.

He also worked with attorney Jan Schlichtmann on the case written about by Jonathan Harr in his best-selling book A Civil Action, which later became a movie.

In addition to his formidable legal reputation, he is know throughout HLS for his habit of frustrating other professors and publicizing confidential information.

Jackson to speak at HLS, during the meeting time of several classes, including one taught by Law professor Alvin C. Warren.

Warren then sent an e-mail to a small group of faculty members, including Nesson and Ogletree, asking that the event be rescheduled.

Ogletree and Warren had a heated and personal debate over e-mail that Nesson wanted to share with students and faculty. Warren said he thought it was better not to.

Nesson shared the e-mails with his class anyway. When Warren met with Nesson to discuss the ethics of divulging the e-mails, Nesson secretly tape-recorded this conversation, then put the audio and the e-mails on his website and told students and faculty where they could find it.

As Nesson pulls out of the cemetery parking lot in his two-door Honda Civic, a burned CD starts spinning in the stereo.

“That’s my daughter,” Nesson says with a laugh. The DJ is her boyfriend. “She is studying history at Duke. I’m going down tomorrow to see her teach. It’s a Civil War class.”

At about 8 p.m. Nesson returns to his unassuming home in a historic Cambridge neighborhood.

The house is neat and well furnished, the walls covered in pictures that his wife Fern has collected. The high school math teacher and former lawyer also dabbles in photography.

Nesson settles down to a cup of coffee, a bowl of oatmeal and the New York Times.

Fern soon comes down and he puts on another CD of Wayne Marshall.

“Oh please...” Fern says. “If you want to see Charlie dance you have to have a specific CD called Eon,” referring to an acid jazz group.

“Bring it to his class and insist that someone play it, and he’ll dance. It’s absolutely horrible, but he’s been known to do it,” she laughs.

Nesson sits down at the table and picks up the camera of Crimson photographer Nathaniel E. Jedrey ’03.

“May I?” Nesson asks Jedrey as he points the camera at him.

“Actually we roll our own,” says Jedrey.

“Wow, you’ve got to be pretty serious if you roll your own,” says Nesson, with no sign that he’s joking.

Nesson soon goes downstairs to turn on the sprinklers outside, and Fern begins talking about the two of them.

“We met in 1969 at the Law School when I was a student,” she says, looking toward the basement door after hearing a loud thud from the pipes and a yell from Nesson before continuing on.

“We’ve been married for about 30 years and have two kids, Rebecca and Leila.”

Soon Nesson comes upstairs, saying that the pipe to the sprinklers is broken.

“In the way that you turn it on and water rushes out of the pipe onto the floor.”

Plumbing aside, Nesson has spent the last 20 years becoming one of the world’s leading experts in technology and its relationship to the law.

In 1981 he went on a sabbatical that got tangled up with the other side of the law.

“I got an early IBM PC and it came with BASIC,” Nesson recounts. “I programmed the machine to play five-card draw jacks-or-better poker and I loved it, figuring out how to make it deal and shuffle the cards. I was able to sell that and buy a summer house.”

“I am sad to say, [the company] was subsequently indicted for manufacturing illegal gambling equipment,” Nesson writes on his website.

In 1997 he founded the Berkman Center for Internet and Society, which he helmed until just this week, when he announced he was stepping down to make time for other projects. Professor William W. Fisher III will replace him.

The offices on the fifth floor of Griswold Hall are still empty when Nesson arrives at his office. Pictures of his wife and daughters decorate the walls and computer monitors. Hard-drives and video cameras litter the room and a hand-rolled cigarette sits besides a lighter on his desk.

He begins discussing a project he started with Ogletree that will use the Internet the educate Jamaican prisoners.

“Jamaica is a perfect example of a country that has made the transition from colonialism to independence and been taken to the cleaners by the capitalist system and the International Monetary Fund,” he says.

“We’re not certifying anybody, we’re not selling Harvard degrees.” Nesson says. “The whole point is to change people’s perceptions, including that of the staff and the guards and community nearby. We want people not to see a prison as where people are banished, but as a school for the toughest kids who have failed, failed society. ”

He puts on some music, Foreigner, as he settles into his office.

“The morning routine is e-mails,” he says, singing along.

After answering e-mails he reads a clipping from the Boston Herald’s gossip column about his marijuana use.

In February, he told the Harvard Law Record that he has experimented with numerous drugs, including LSD and cocaine, and likes to take “a puff or two of a joint” on his morning walks, sometimes before teaching. This was picked up national news.

But Nesson wants to put aside those controversies.

“I think I’d like to stay away from recent history, it’s so close to the present that I’d like to focus on that,” he says.

His unconventional style has sometimes put him at odds with his students.

Earlier this month he received criticism for a proposal that there be a mock trial for Matthias Scholl, a first-year law student who sent an e-mail to a classmate defending the use of the word “nigger.”

“I wanted to have a process that had some feeling of neutrality in it and gave people roles to play. That would give a chance for ideas to be articulated, hard questions asked and deliberated on; some meeting of minds and, conceivably, a solution,” Nesson says.

Nesson said he regrets that the proposal offended some students.

“I feel terrible about the emotional upset I have caused, and deeply regret that I have placed students who were already hurt once in the position of having to deal with yet another occasion for apology. I acted with good intention but without due care,” Nesson told The Crimson after the incident.

After a walk to Harkness Commons for a bagel and coffee, Nesson realizes it is 10:55. He runs back to Griswold and sprints up four flights of stairs to his office to get a box of papers to distribute to his students. Someone has already brought the papers to class, so Nesson runs back downstairs and to the Austin Hall classroom.

“Sorry I’m late!” he says to the class, handing five papers from other students to each student. He tells the class to read each paper and rank them on piece of paper, saying that he will then grade the papers and use the exercise to show the difference between what students and professors look for in a paper.

A student gets up and asks Nesson what relevance the ranking will have on the grades of the papers.

Nesson says that he is not sure and leaves the classroom to get more ranking sheets.

Just after he leaves, a student in the front of the class begins a short speech to the rest of the room.

Soon the room is abuzz, with people standing up and complaining.

“Can you talk about this outside so those of us who are trying to do the assignment can? And could you not make everything into an issue?” one shouts back.

“I think this is a legitimate experiment,” says another.

Students soon get up and walk out of the classroom grumbling about not wanting to do the assignment.

Nesson returns and all of the students who left the room return quietly, sit down and rank the papers.

After the class, one student says that Nesson’s irreverent style and teaching methods could work well, but are too unstructured and don’t relate enough to the material.

“Instead it just seems like a way for Charlie to not grade papers,” she says.

Taking papers from students as they leave, Nesson reflects on his more than 30 years at HLS.

“After I got tenure I took five years of leave and litigated. I really thought about staying in practice” Nesson says, “but there was something in this place. There is a power here, not like the kind of power to beat somebody up with, but the kind of power that excites you about coming here and working.”