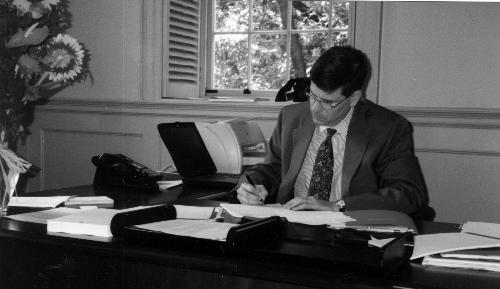 Dean of the Faculty of Arts and Sciences WILLIAM C. KIRBY is using the summer to plan a review of the College academic curriculum. He has yet to name a new Dean of Undergraduate Education.
By Dan Rosenheck, Crimson Staff Writer

Houghton Professor of Chemistry and Biochemistry Jeremy R. Knowles insisted on being called “Professor Knowles” this week, as Geisinger Professor of History William C. Kirby replaced Knowles as dean of the Faculty on Monday.

Kirby said the transition went smoothly. In fact, Knowles said he gave Kirby the keys to his office last Friday so that “when he walked in Monday morning, it would be his office.”

The new dean says he is planning a comprehensive review of the undergraduate curriculum, with special attention to study abroad and international studies in general as well as to science.

But planning for the review must wait on Kirby’s selection of a new dean of undergraduate education to replace Susan G. Pedersen ’81-’82, who stepped down from the position at the end of the last academic year.

Kirby said he has not picked Pedersen’s successor but has had extensive conversations with faculty members about undergraduate education.

Kirby had ample opportunities over the last month to acclimate to the demands of the deanship, Knowles said. After Kirby’s selection was announced, Knowles gave Kirby his calendar and invited him to every meeting on the agenda until July 1.

Knowles said Kirby was also especially well prepared for the deanship because of his extensive involvement in faculty affairs as a professor, when he served as chair of the history department and director of the Asia Center. Kirby also co-wrote an influential report on study abroad.

Knowles is going on leave next year, though he will remain in Cambridge. He said he plans to go to his first chemistry department meeting since he became dean and catch up on 11 years’ worth of research in his field. He said that after he returns from sabbatical, he plans to resume teaching.

Knowles made one final appointment before he left office: Kirby’s replacement as Director of the Asia Center, Burbank Professor of Political Economy Dwight H. Perkins. Kirby described Perkins as an “economist of worldwide reputation” whose “interests span an enormous part of Asia.”

Knowles said he was confident that Kirby would be “terrific,” but the new dean said that if he were to err, the artwork in his office would quickly steer him back on course.

“There are a couple of portraits of very stern Puritans who are staring at me…in order to make sure one does not get too carried away,” Kirby said.

—Kate L. Rakoczy contributed to the reporting of this article.

—Staff writer Dan Rosenheck can be reached at rosenhec@fas.harvard.edu.