Inside the Campus Band Establishment 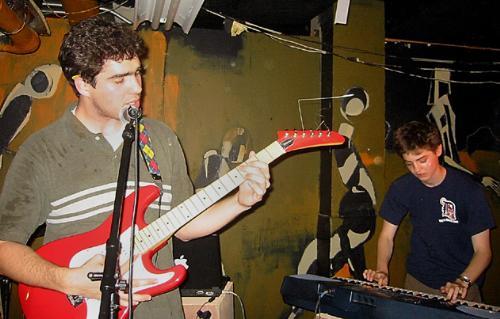 Musicians complain that Harvard’s music scene has been stagnant and disorganized for years. Bands form and disband within months, finding no opportunities to play live, win over a fan base or create a lasting product.

“The scene here is near nonexistent,” says Forced Premise drummer Nicholas B. Sylvester ’04. “There’s basically three dudes in tight jeans and T-shirts walking around campus, and they all hate each other.”

But this fall, several new groups have formed to join a few enduring veterans, buoyed further by an effort to establish a new undergraduate record label, Veritas Records, which aims to consolidate Harvard’s scattered bands into a definitive roster.

Veritas founder Daniel J. Zaccagnino ’05 has already assembled a team of established industry professionals and faculty advisors from the Music Department. Now he is waiting for the Harvard administration to approve his plan to run a business on campus. Once he’s through the red tape, Zaccagnino will begin serious talks with bands—what he calls “the fun part.”

“There are plenty of great musicians [at Harvard],” he says. “It’s just that no one knows about them because the music scene is weak and most bands don’t have time to set up shows, record on their own and promote their music.”

Optimistic about mining the campus scene for talent, he intends to represent all styles of music on the Veritas roster.

“That’s what we’re here for,” he says. “[The label] is exactly what Harvard needs to further interest in music on campus.”

Zaccagnino and the Veritas team plan to help bands by promoting their concerts, organizing recording sessions at Quad Sound Studios and releasing CDs to the public. Zaccagnino wants to help fund bands as much as possible, providing them not only with money but a healthy pressure to remain disciplined and focused.

“There will be drafted agreements, not contracts,” he says. “There’ll just be agreements on both sides.”

The first Veritas release, tentatively scheduled to come out in early spring, will be a full length compilation featuring four or five bands, each contributing two songs.

“We’re going to have a huge party, put down 10 kegs and have all the bands play a set,” Zaccagnino says.

Zaccagnino is optimistic about his project, and with good reason. Though the network of bands at Harvard has not always been visible, the scene this year is full of well-established acts, all of whom are searching for commercial outlets.

Blanks.—last year’s emo-punk freshman phenoms—just opened for the North Mississippi All Stars at Loker Lecture Hall last Saturday. Having established a strong following, the band is retreating from the spotlight this term to rehearse and write new material.

“We want to blow people away,” says guitarist and lead singer Matthew C. Boch ’06. “We want to move ourselves forward. We want to kill our first real gig when we play out.”

“If I’m not in an…important rock band within the next five years, I’ll be very disappointed with my life,” he adds.

The States, who share a practice space with Blanks., are also using this year to tighten their hold on the Boston circuit, playing shows and sending out their new demo, The Winter EP, to a number of labels.

“I don’t think we really found our sound until this summer,” writes bassist Previn Warren ’04 in an e-mail. “This time around, we wrote all the songs together as a unit. I’d be walking around the Square and a melody would pop in my head. I’d call Chris and sing it to him, he’d record it, take it to his guitar, and we’d show up to the practice room the next day with all kinds of ideas.”

Next year, the edgy rock trio plans to move to a New York City apartment and try their hand at a professional music career. While the States used to frequent Harvard venues such as the Quincy Cage and the Advocate, they have recently moved up to playing city gigs at T.T. the Bear’s and Sky Bar.

The Justice League, one of only two hip-hop groups on campus, began their career opening for Fabolous in February 2003, and they’ve been together ever since. The four emcees have since developed their style and expanded their fan base, playing shows around Harvard and laying the groundwork for their first demo recording. Rapper Dominique C. DeLeon ’04, who produces the group’s beats on his computer, does not think that being from Harvard will diminish his credibility.

“I don’t mask my intelligence,” he says. “The record industry is always looking for a gimmick—that might be ours.”

The Witness Protection Program, comprised of six musicians and two emcees, have arguably become the biggest success story on campus. Their live instrumentation and “Dylan-esque” rhymes set them apart from most mainstream acts, making their relative stardom an especially pleasant surprise. Since opening for Jurassic 5 and Blackalicious at Amherst College more than a year ago, they’ve played The Middle East and the Paradise, as well as major venues in New York City.

“Playing live is just a chance to party with the audience,” says keyboardist Nick J. Britell ’04. The band like doing it so much, in fact, that they released a live double album, recorded at the Paradise by Clear Channel. The Witness Protection Program are currently remastering their latest EP, which they hope to use as their demo once it’s complete.

Other campus institutions, unfortunately, have disbanded in the past year—Subject to Change, FinkFankFunk and the Capability. But in their place are the Jesse Andrews Taste Explosion (an evolution of FFF) and a new outfit formed by Ben Scheuer from the Capability and his brother Adam.

Meanwhile, a number of new bands are looking to start their careers at Harvard this year, infusing the local scene with an as-yet undeterred spirit.

Forced Premise, a four piece “noise pop” band featuring four members of the Harvard Lampoon, played one concert late last year—a talent show in which, the band is proud to say, they served as the finale—and continued rehearsing throughout the summer in preparation for their comeback gig at the Quincy Cage on Sept. 25.

“We split up almost every other day,” jokes bassist Peter O. Nelson ’04. Guitarist and lead singer Robert J. Dubbin ’04 adds, “It’s a collaborative effort now, though. As soon as I learned chords, we started in a new direction.”

Forced Premise hope to change the landscape of the Harvard music scene, as they are constantly developing their sound, writing new material and experimenting with different styles. They claim to cite flagship bands such as the Beatles, Radiohead and Deerhoof as their main influences.

Another band, the Half Nelsons, have recently revamped their sound with a new bass player, and are taking this year to launch their careers as full-time rock stars.

“I have a job now,” says guitarist and lead singer Eric Nelson ’99. “But I’d much rather be a rock star. Who wouldn’t?”

The band has been together since February 2002, playing shows at the Leverett Coffeehouse, the Holyoke Center and most recently Tufts University. The group describe their infectious blend of garage, rockabilly and Seattle grunge as a combination of the Strokes, Led Zeppelin and the Rolling Stones.

The Half Nelsons perform tonight at Tufts’ Hill Hall, pointing to the dearth of music venues at Harvard as their impetus for traveling off-campus.

“There are never any cool shows [on campus], and more should happen,” Nelson says.

Almost every major grassroots-turned-pop trend in recent history has had, at its center, a basement or a nightclub in which the phenomenon was born. ’77 punk had CBGB’s; Grunge had Seattle’s Crocodile; Berkeley punk had the Gilman St. Theater. And so Harvard must have its share of venues.

Aside from established Cambridge and Boston clubs—T.T.’s, the Paradise and the Middle East—Harvard offers several small, more intimate locations.

The Advocate and the Lampoon throw occasional parties, and the Adams House swimming pool can be transformed into a veritable rock’n’roll arena.

Many final clubs hire bands to play at parties. Loker Commons sometimes hosts concerts too, but according to Nelson, getting shows organized there is “like pulling teeth.”

Despite all these occasional outlets, however, the only full-time venue on campus is the Quincy Cage in the Quincy House basement. The Cage, founded in the spring of 2002 by students who were tired of the formality of campus concerts, is outfitted with a few sofas, a mixing board and permanent stage decorations. The group in charge of the Cage—known as the Collective—hosts a concert every other week.

“We aim to bring together the virtually infinite [number of] talented performers on campus with the even more plentiful music lovers,” writes the Collective’s Grace Catenaccio ’04 in an e-mail. “[We] create a forum for musical expression that is sadly lacking at Harvard. Until the Collective, [there was] nowhere that musicians of all styles and experience levels could just come to jam. We have jazz, we have country, we have hip hop and we have a lot of folk rock.”

Veritas Records may prove to be the ingredient that Harvard’s music scene has needed all along.

“Right now, the music scene isn’t anywhere near where it should be,” says Zaccagnino. “There’s so many good bands of all different genres. So many people are looking for things to do.”